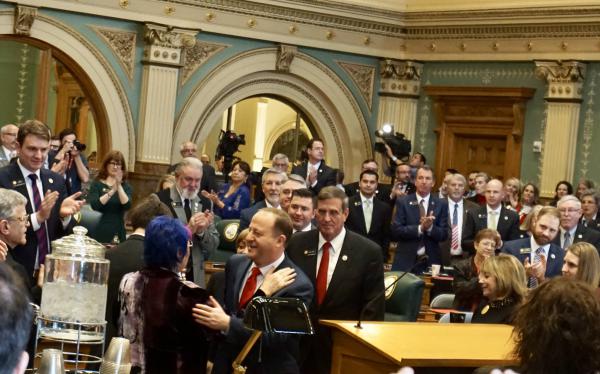 Scott Franz / Capitol Coverage Colorado Gov. Jared Polis is embraced by his mother before his State of the State address on Thursday morning. 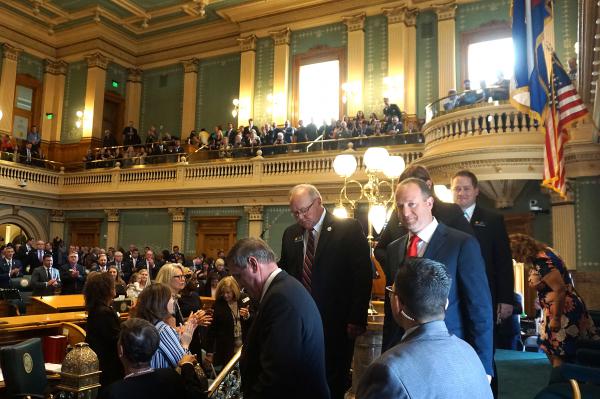 Democrats applauded as Gov. Jared Polis outlined his administration's priorities in his first State of the State Thursday. He touched on topics from full-day kindergarten funding to paid family leave and oil and gas development.

But the governor's address was criticized by Republicans for its lack of specifics on where all the money for his agenda will come from.

Wearing the same signature blue sneakers he wore during campaign season, Polis focused much of his speech outlining his plans to improve health care in the state. He pledged to bring down the cost of health insurance, especially for residents on the Western Slope who pay much more for their premiums than residents on the Front Range.

The new governor announced the creation of the Office of Saving People Money on Health Care to tackle the issue. Some lawmakers in the House chambers initially laughed when the name of the office was announced. But Polis stressed he was serious about the issue.

"Led by Lt. Gov. (Dianne Primavera), the Office of Saving People Money on Health Care will form the beating heart of our efforts to reduce patient costs for hospital stays and expenses, improve price transparency, lower the price of prescription drugs, and make health insurance more affordable," he said.

Polis also called on lawmakers to fund full-day kindergarten before the start of the next school year. That pledge even got some Republican lawmakers to stand and applaud, including Rep. Jim Wilson. Wilson is a former schoolteacher from Salida.

State Rep. Bob Rankin is also supportive of the proposal. But he says there's still a question of where the money will come from.

"We got to find a way to support full-day kindergarten," Rankin said after the speech. "He didn't tell us where to get the money. He left that up to us so that's some work we're going to have to do."

Polis called for lower state income tax rates for families and small businesses. He also touched on several of the campaign promises he made, including pivoting toward renewable sources of energy.

State Rep. Dylan Roberts, D-Avon, thinks his constituents on the Western Slope will be excited to hear the governor's plans.

"He really dug into some details on his priorities as far his health care, transportation, renewable energy and transportation," Roberts said. "I think a lot of my constituents will be excited to know that these things are his priorities, and not just campaign talking points."

Roberts, who is leading legislative efforts to address the rising cost of health insurance in mountain communities, said the new governor hasn't told lawmakers yet how the new Office of Saving People Money on Health Care plans to work with the legislature to tackle the issue.

Senate Minority Leader Chris Holbert questioned how the new governor would find the money for his first-term agenda.

"All of these things might sound good, and we saw the Democratic members of the legislature stand repeatedly to applaud things that were not well defined," Holbert said. "And here we have to balance our budget. We cannot spend more than we have. And the governor is coming from somewhere where a dollar doesn't mean a dollar."

Polis made the speech personal at times. In an apparent nod to bipartisanship, he talked about the moment he taught his son, Caspian, about political parties.

"And at the end, he went over to his 4-year-old sister Cora and asked her, 'What political party are you in?'" Polis recalled. "And without missing a beat, she answered, 'the Happy Birthday Party.'"

"It was one of those moments every parent experiences, where your child shows you wisdom you can't get from most adults," Polis continued. "And it's wisdom that will guide our approach to problem solving in this administration."