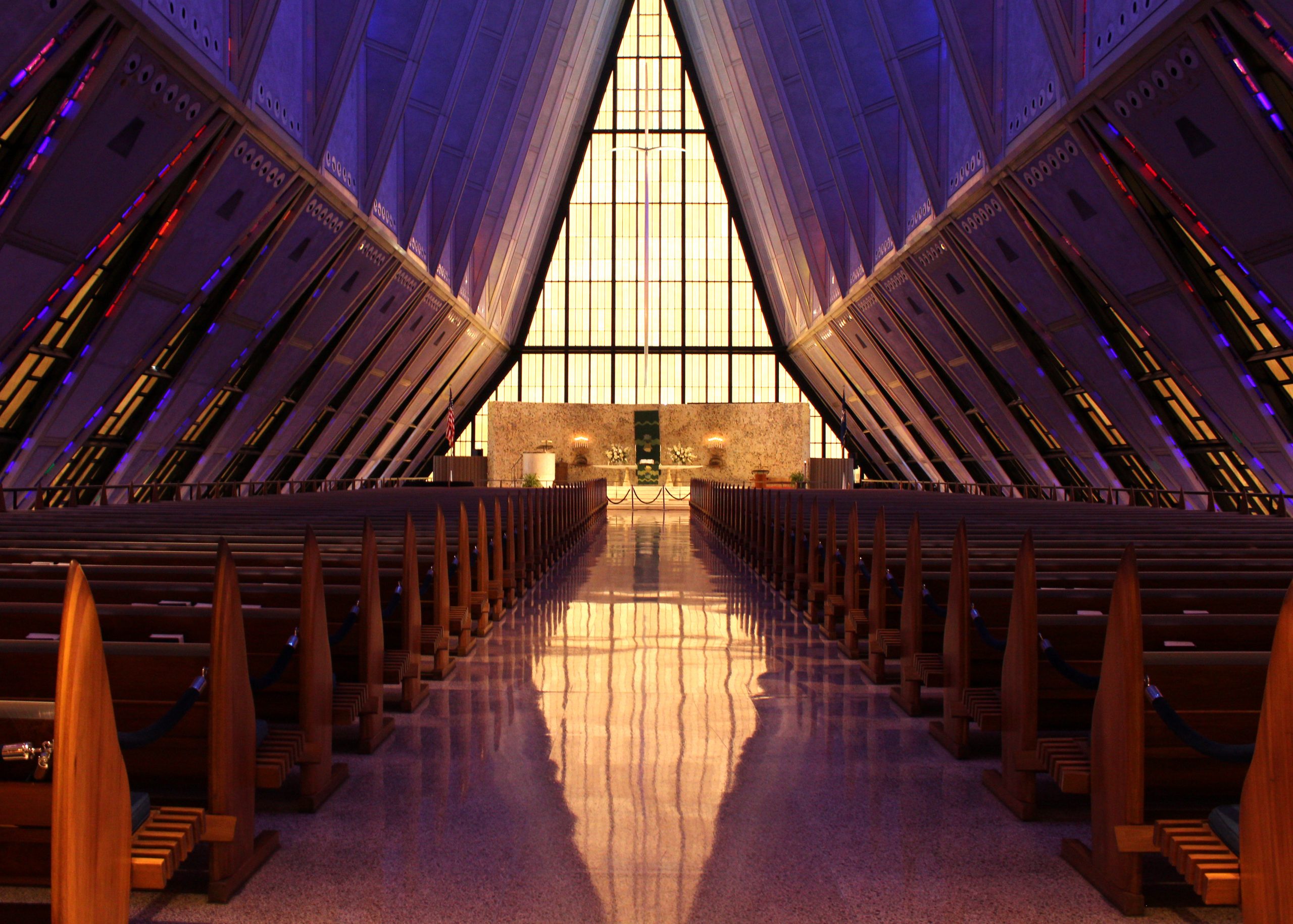 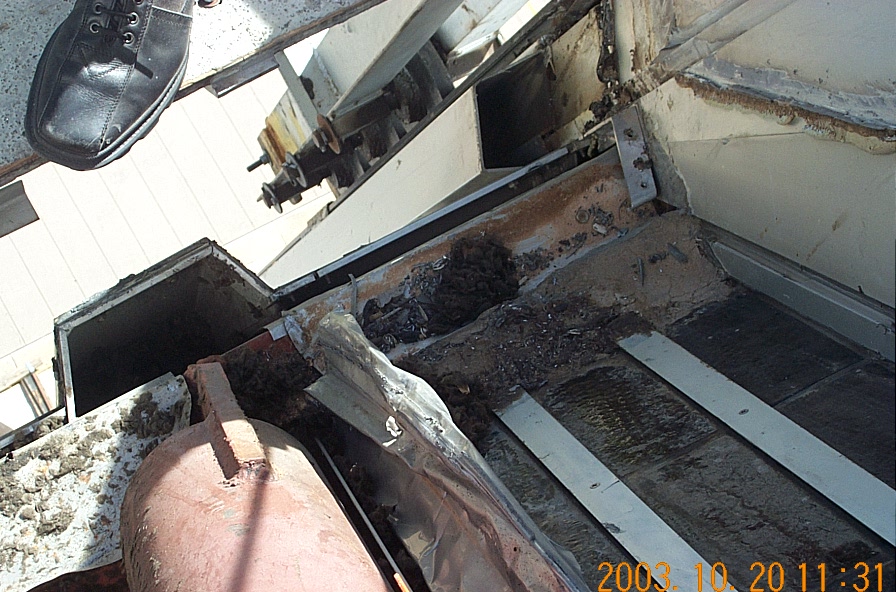 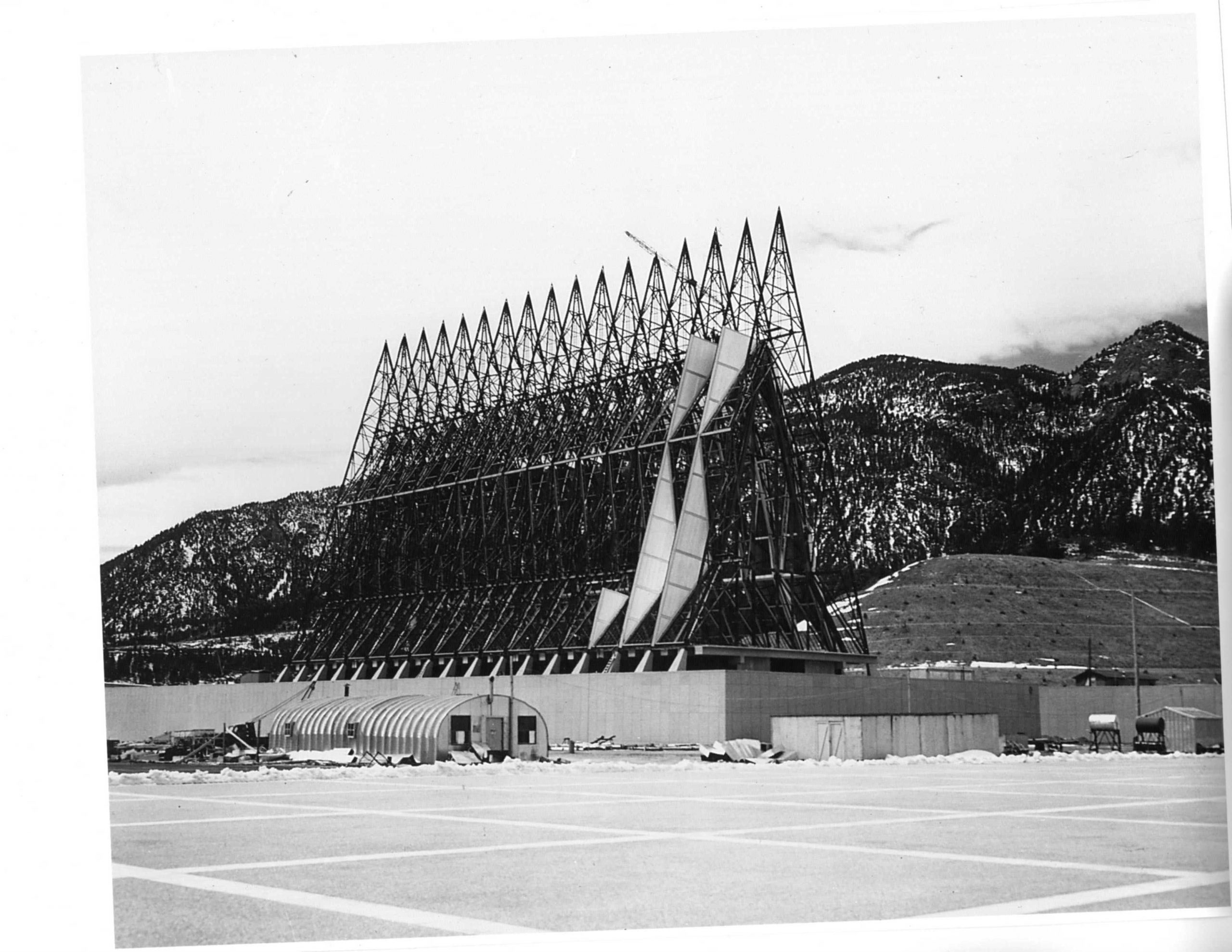 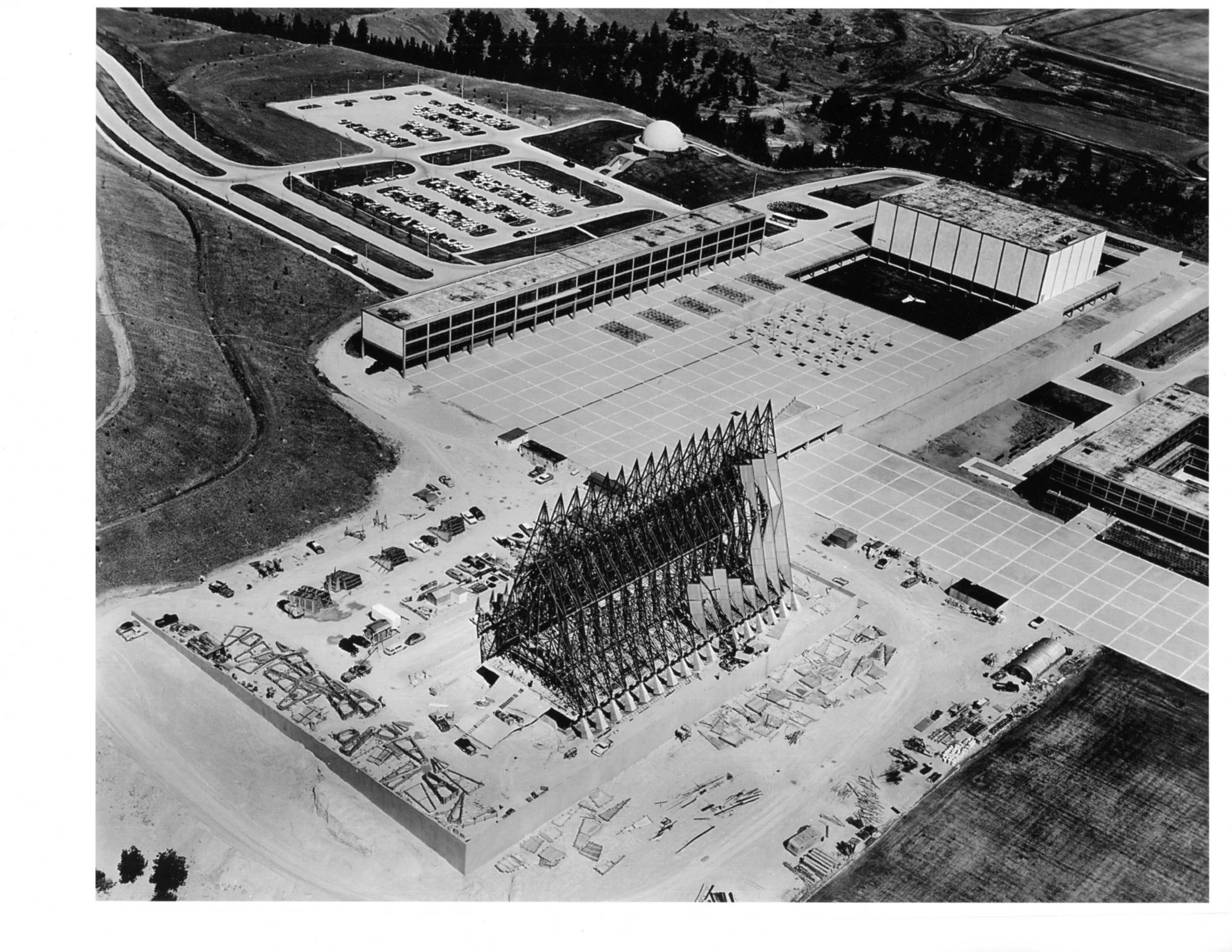 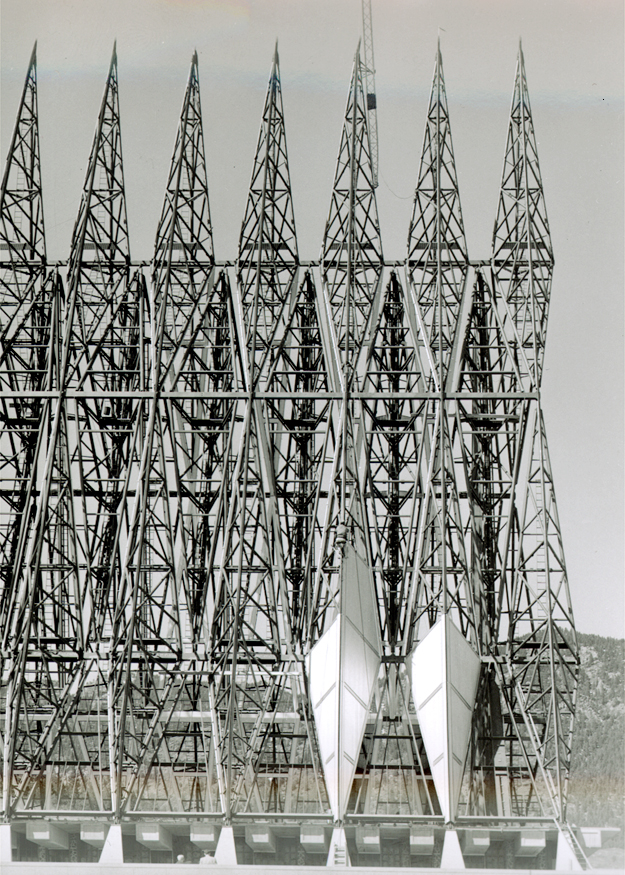 The Cadet Chapel at the United States Air Force Academy has a spectacular presence both up close and from a distance. Seventeen gleaming aluminum spires reflect the sun and the sky, shining panels of stained glass cast a purple glow on the tile floor. Sound fills the space, creating a soul-stirring acoustic experience.

The chapel is in desperate need of renovation, though. Work was supposed to start this summer to restore the decades-old structure. The project was cancelled after $68 million in funds were diverted to projects at Tyndall Air Force Base in Florida, which was heavily damaged by Hurricane Michael in October of last year.

Walking down the center aisle of the chapel, Academy Architect Duane Boyle points out damage. He says the building has endured band-aid fixes from the very beginning.

“So, as you walk along here you can see some staining in the acoustic plaster. When it rains here and starts leaking we have to use buckets to collect the water. It leaks that bad,” he says.

Many of the issues aren’t obvious at first glance. But in a building of this notoriety and importance, Boyle’s disappointment at the damage is unmistakable.

“It's meant to be the centerpiece of the Academy and was always intended to be that way,” he says.

The chronic leaking is a huge problem. Boyle says it happens because of a cost-saving change in the initial design because the project was over budget.

“Well, basically the aluminum skin on the outside the building was supposed to be a rain screen,” he says. “So, the majority of the water would flow off the outside aluminum skin, but there's a lot of joints on this building—32 miles of joints—and so it was anticipated the water was going to get in through those joints.”

To prevent that, the original design included something called internal flashing—basically large sheets of aluminum that would function like a rain gutter.

“They were supposed to intercept any of the water that got through the joints and carry that out. And so, all of that was value-engineered out in favor doing the sealants and the sealants have never really worked very well for us,” he says.

Those 32 miles of joints Boyle mentioned have been repeatedly covered with caulking, damaging the aluminum exterior and still allowing water in.

But that’s not the only problem. During the more than a dozen years spent evaluating the building for renovation, Boyle says they noticed how the structure tends to move due to different environmental factors.

“The building moves much differently at the south end [and]  the north end than it does in the middle. It moves differently from the floor level to the top,” he says.

That was also set to be remedied in the renovation process.

Boyle says damage at the chapel will only get worse if the repairs are not made. The cadet area was named a National Historic Landmark in 2004. That makes finding someone to do the repairs complicated on a structure that can only be described as geometrically-complex.

“The chapel structure that we have here is pretty interesting. It's basically a series of tetrahedrons which is a three-dimensional truss,” Boyle explains.

The building is made up of 100 of those identical tetrahedrons or triangular pyramids. Architect Walter Netsch of Skidmore, Owings & Merrill in Chicago is credited with the design of the Academy campus. Netsch planned the chapel with his signature aesthetic— field theory, which uses rotated shapes to create patterns based on mathematical equations. If you Google it, you’ll find lots of kaleidoscope-esque sketches.

“So, each spire is four tetrahedrons on each side- one tetrahedron stacked up on top of another and then two on the other side. And the space in between the spires is basically that same tetrahedron turned 180 degrees and put in place,” he says.

The chapel is one of the best examples of modern architecture in the world, according to Boyle.

“When Walter Netsch had the design of pretty much everything on the Academy fairly well in hand, he decided to go to Europe and see which cathedrals in Europe could inspire him in the design of the chapel.”

“Notre Dame is 150 feet tall. And that's where the height of this building comes from is Notre Dame,” he says.

The other three were Chartres Cathedral, which inspired the chapel’s flying buttresses; Sainte-Chapelle, which aided Netsch in the idea for light coming into the building.

“[The last was] Assisi, which is the religious structure that convinced Walter you could you could successfully put more than one chapel in a building and have it work,” Boyle says.

Many of the cancelled fixes involved instituting the plans architect Walter Netsch had in place to begin with. That would’ve cost anywhere from $25-100 million. Now that the money has been reallocated though, a spokesman for the Air Force Academy says they don’t know if the renovation will ever resume at all.

The USAFA Cadet Chapel repair has been deferred as the Air Force looks for ways to secure supplemental funding for budget shortfalls. The Chapel will remain open until a final decision is made. We will provide more information as available.