Brandon Martinez poked his rifle out of the dark hunting blind and into the barely lit wilderness of northwestern Colorado. Just beyond the camouflage tent, a few decoy turkeys tried to woo the real thing. Martinez and a few older, experienced hunters shifted in their camp chairs as they listened for that distinctive gobble.

Though the 14-year-old had hunted before, he’d never tried anything as small as turkeys. Martinez, who’s visually impaired, looked into a cell phone camera attached to his gun’s scope, which magnified the scene in front of him.

As if on cue, the blue head and fanned tail of a wild male turkey appeared. The tom was flanked by several hens, all walking with purpose down a dirt road toward the plastic birds.

The bird went down, and Martinez was swamped with praise and slaps on the back. 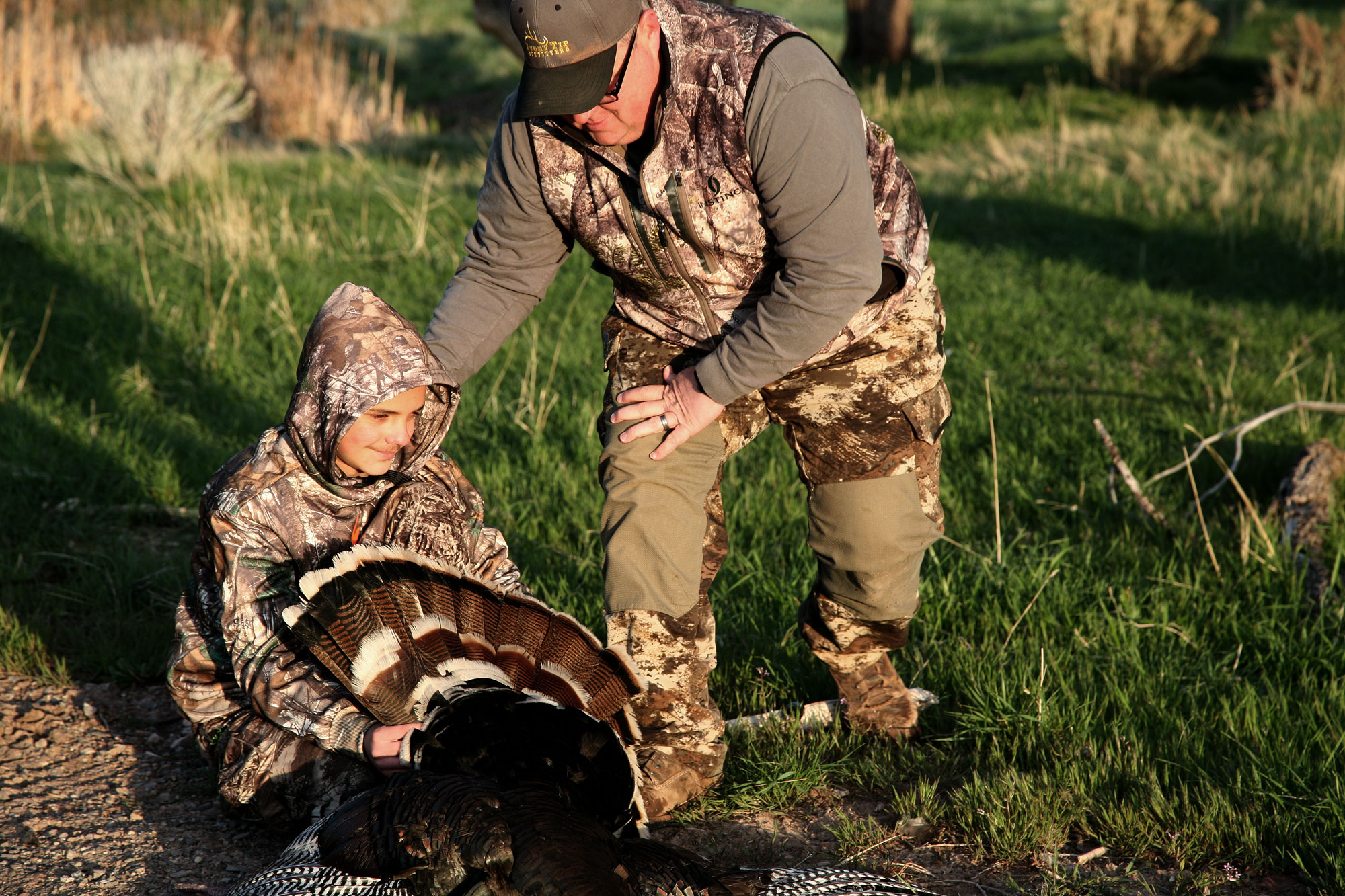 Stina Sieg/CPR NewsBrayden Martinez, 14, gets ready for pictures with his first-ever turkey kill as part of Colorado Parks and Wildlife’s Youth Hunter Outreach Program, May 4 northwest of Craig. 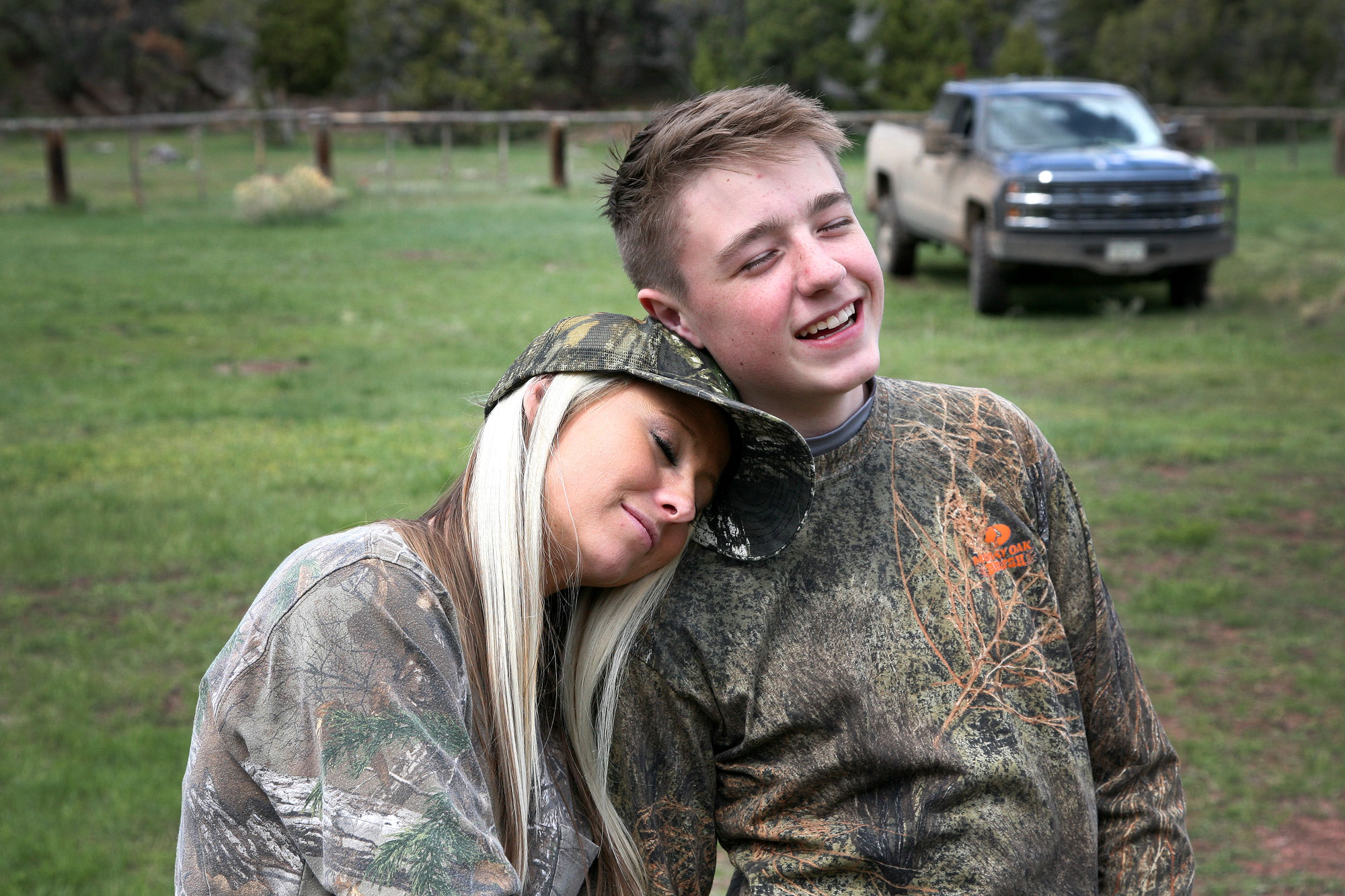 Stina Sieg/CPR NewsThe Colorado Parks and Wildlife’s Youth Hunter Outreach Program hunt isn’t just about youth hunting, but about families doing the sport together. Amber Snow rests her head on her son Hunter’s shoulder after he shot his first turkey. The 14-year-old says he’s been wanting to get a tom for years. He finally did with the help of his grandpa (and Amber’s dad), known as Catfish. 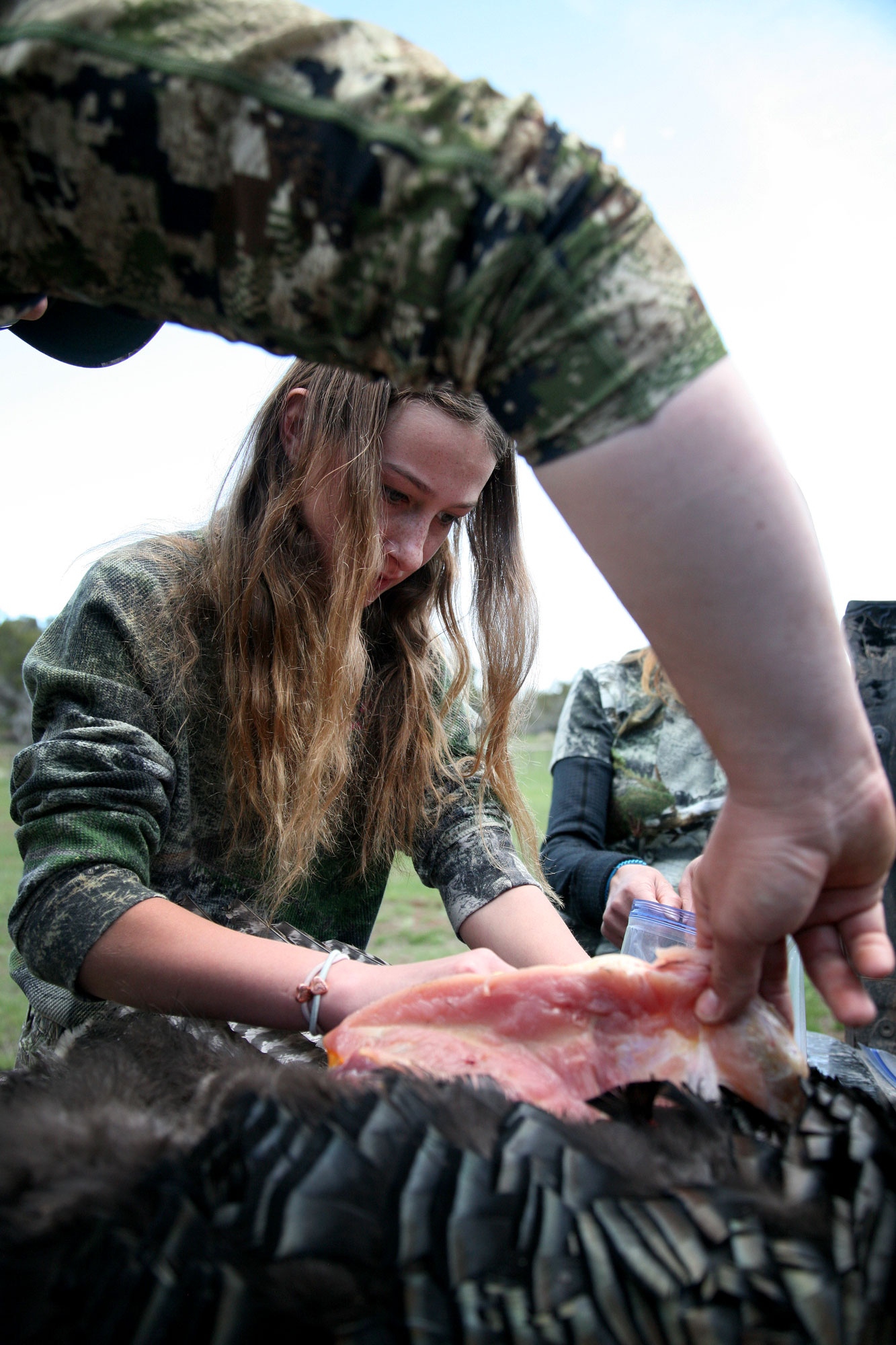 Stina Sieg/CPR NewsSavannah Jones, 13, field dresses a turkey with the help of her hunting mentor Evan Jones (no relation) as part of the Colorado Parks and Wildlife’s Youth Hunter Outreach Program on May 4 northwest of Craig. Though Savannah has hunted before, she’s brand-new to turkey hunting and says she was excited about learning something new. 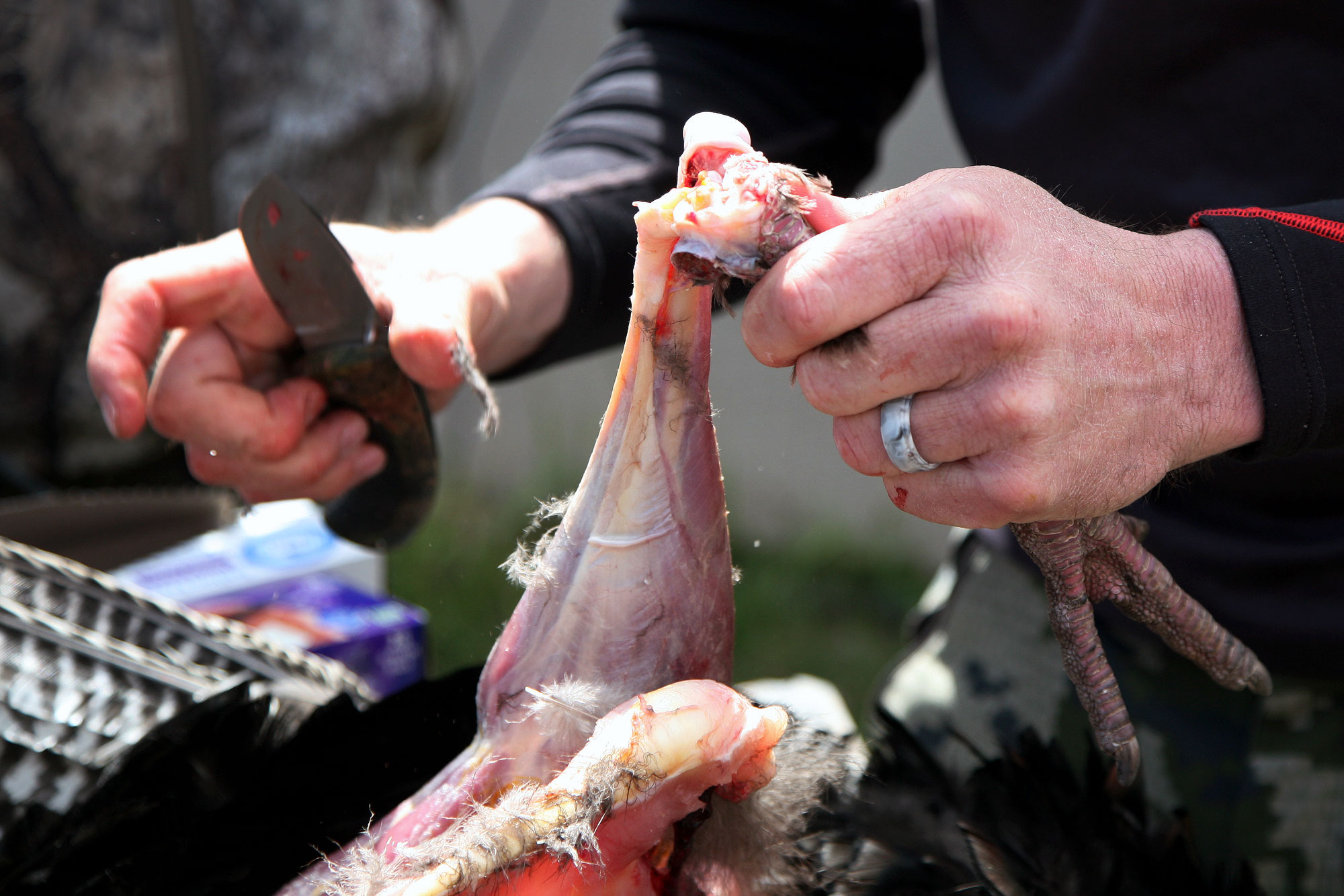 Stina Sieg/CPR NewsColorado Parks and Wildlife’s Mike Swaro shows eager youngsters how to get a turkey ready for supper. Most of the kids in the program are no strangers to hunting and already have freezers full of game meat. 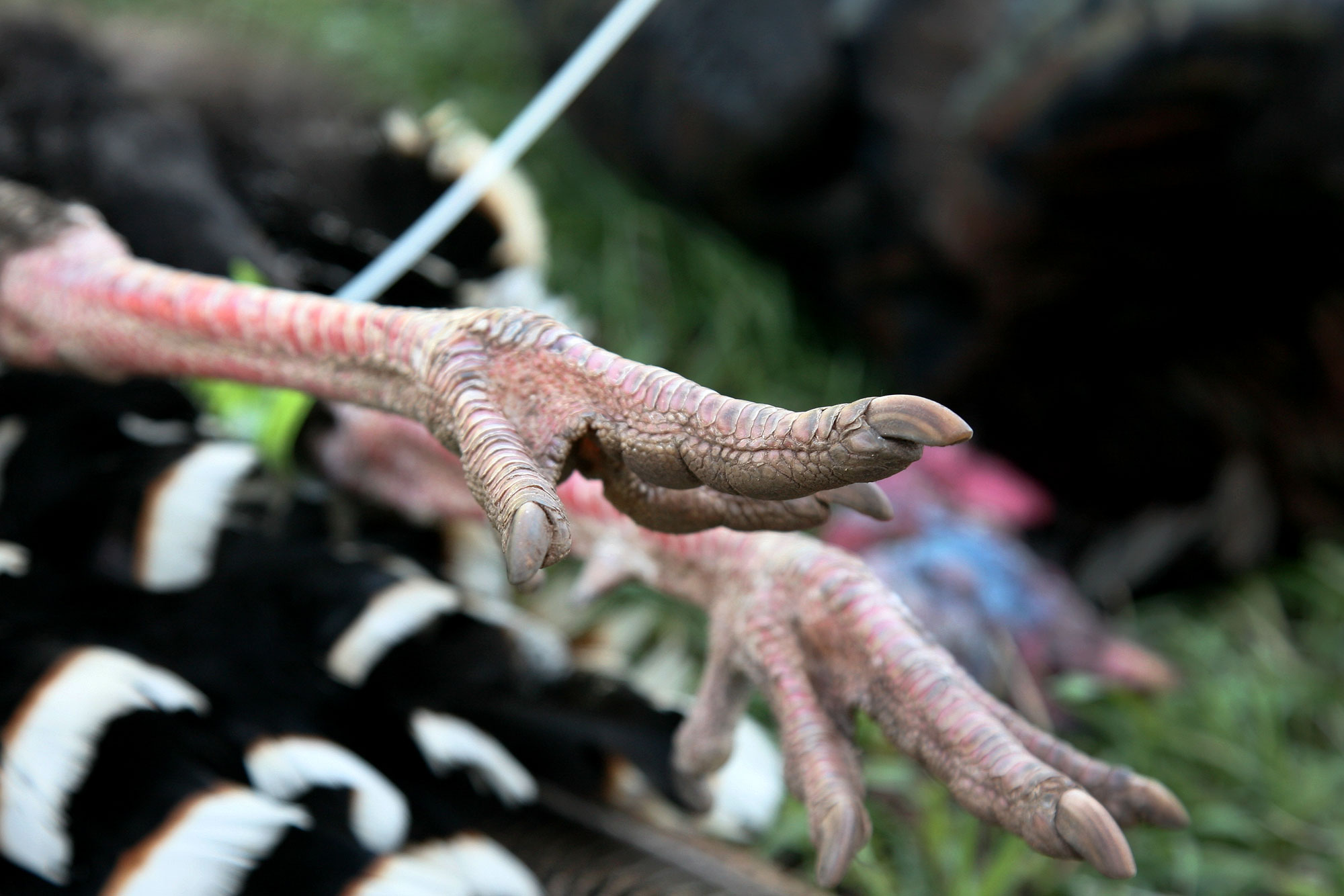 Stina Sieg/CPR NewsThe foot and claw of a turkey taken during the Colorado Parks and Wildlife’s Youth Hunter Outreach Program on May 4 northwest of Craig. The program has been getting young people into hunting for years. The reason is both feel-good and practical. Proceeds from hunting help fund the agency and conservation across the state. 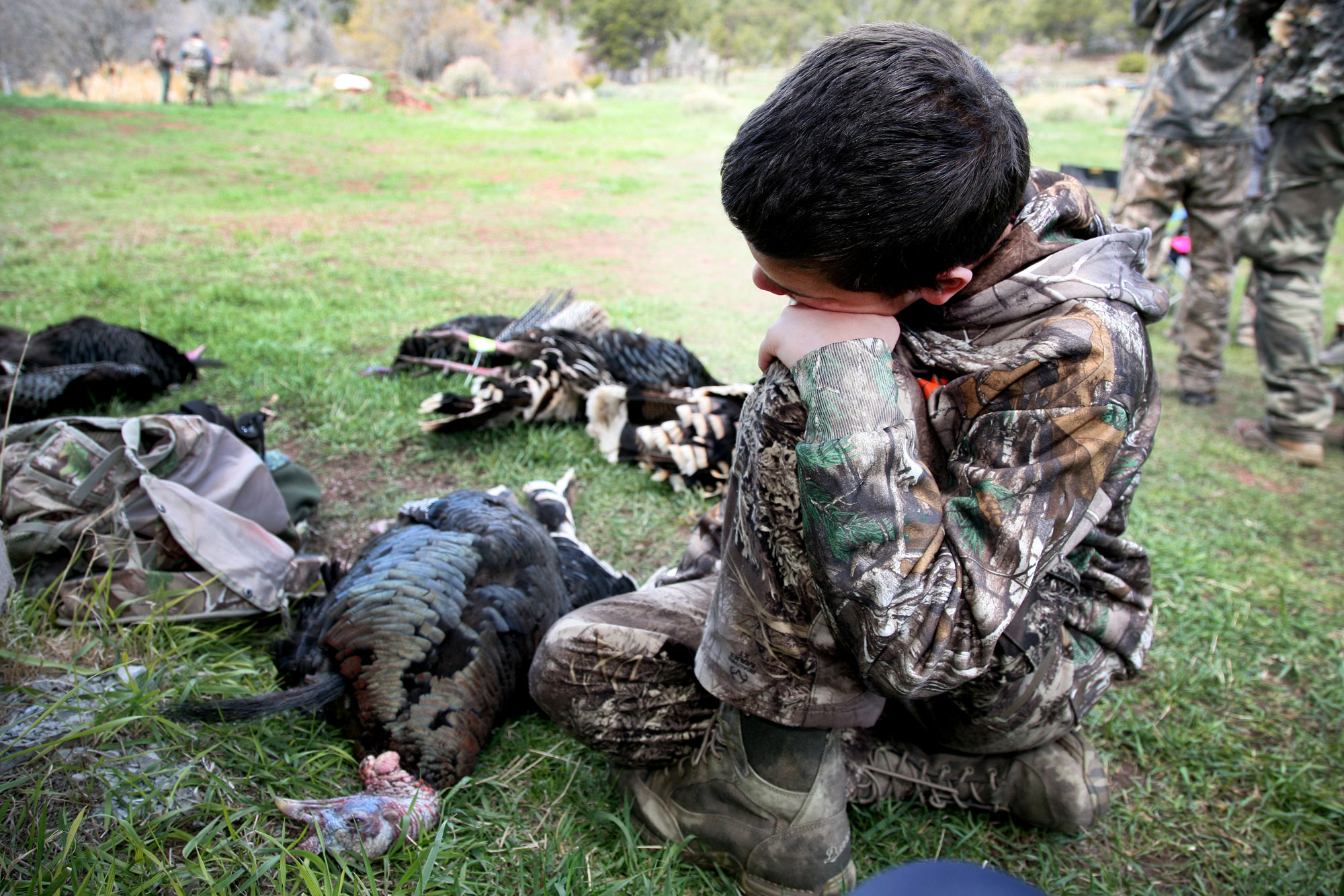 Stina Sieg/CPR NewsBrayden Martinez, 14, sits above the turkey he killed, surrounded by the other birds taken May 4, 2019 at the Colorado Parks and Wildlife’s Youth Hunter Outreach Program northwest of Craig. 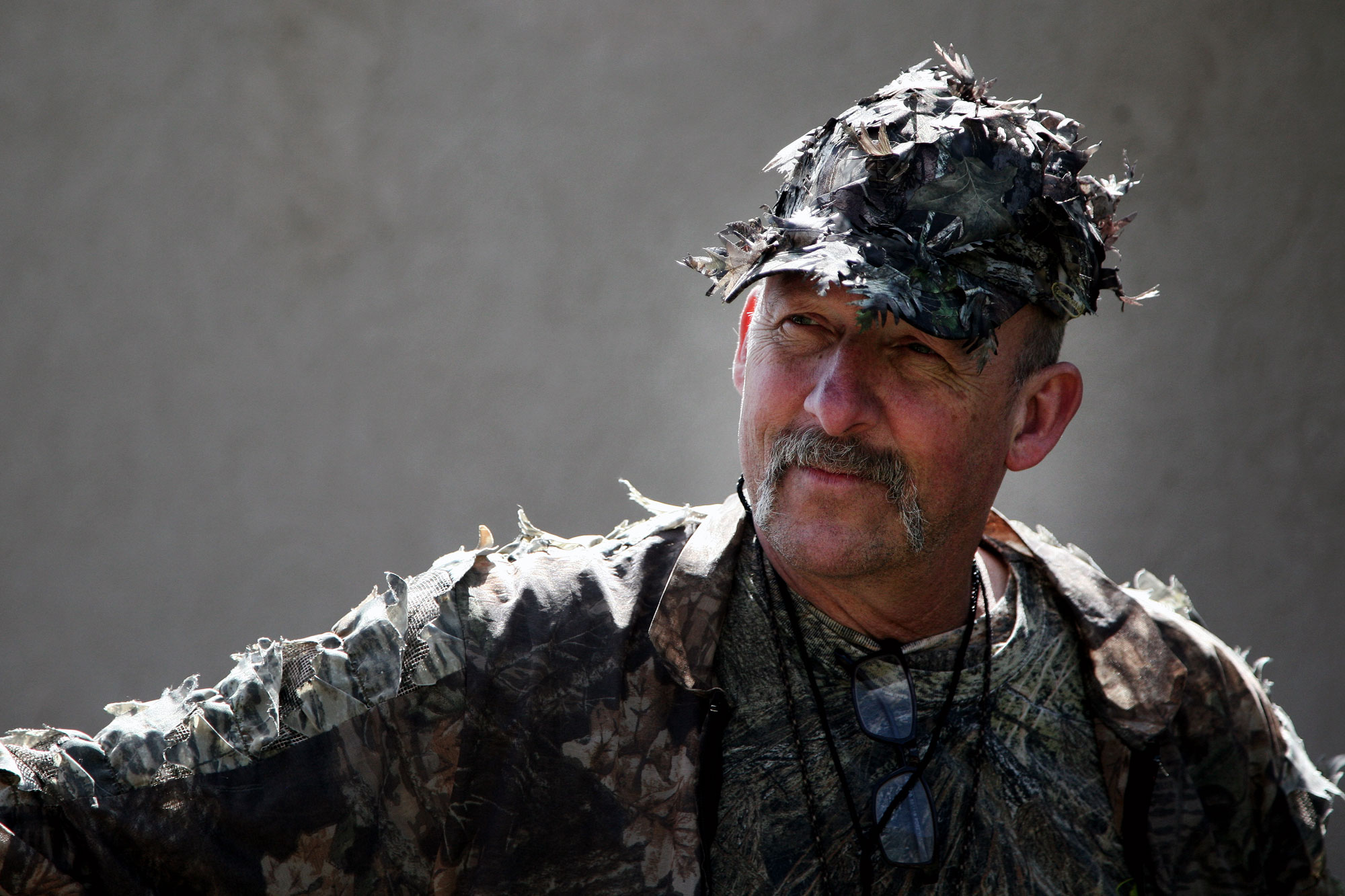 Stina Sieg/CPR NewsJohn Arthurs, known around here as Catfish, has been mentoring young hunters for years. He says it's about giving kids memories that will last a lifetime and will hopefully make them into lifelong hunters, as well. 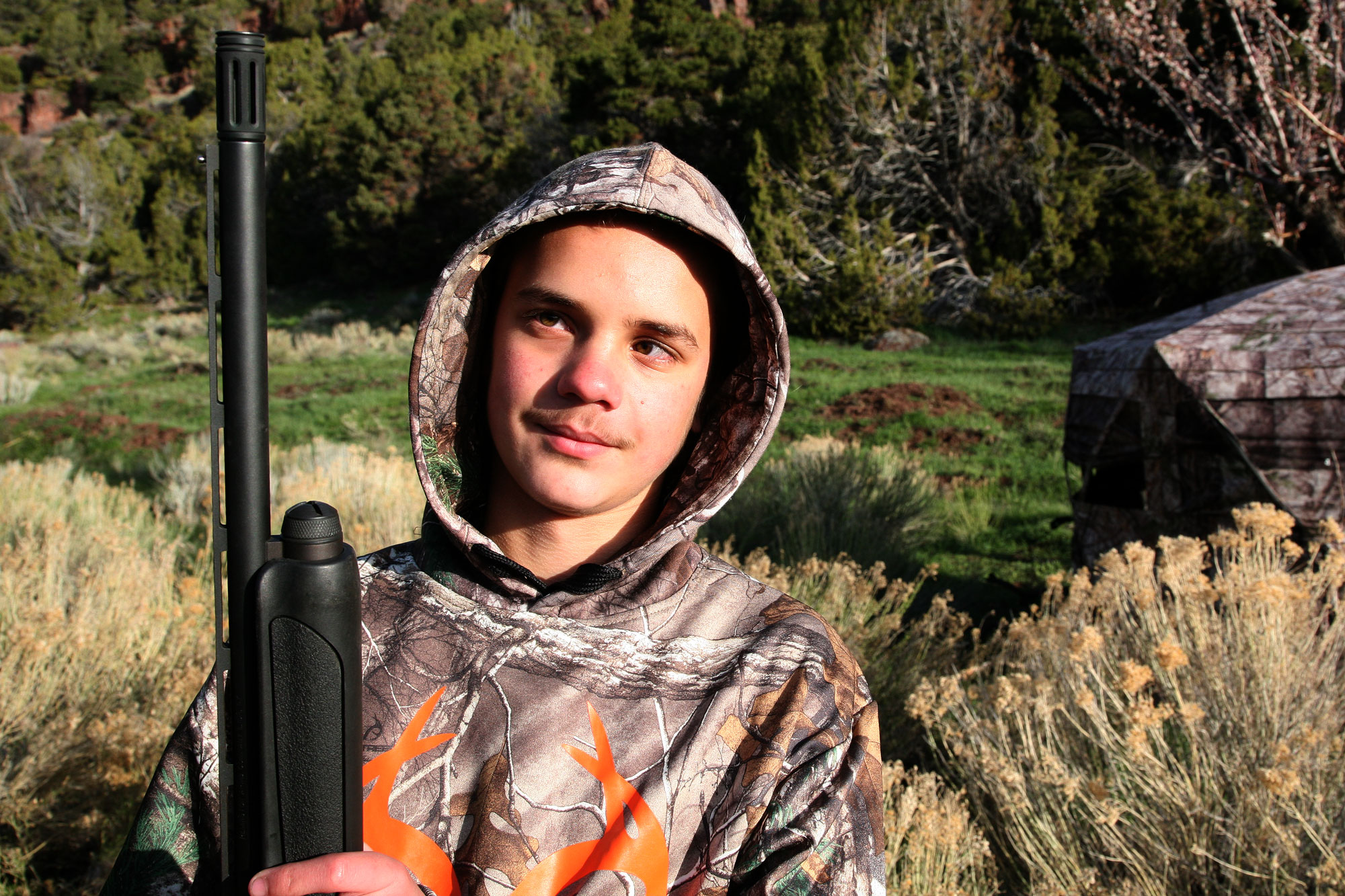 Stina Sieg/CPR NewsThough Brayden Martinez, 14, has hunted a lot in his young life, he’d never been on a turkey hunt until this one. Legally blind, he uses a cell phone camera attached to his scope to help him see while hunting. Colorado Parks and Wildlife hopes programs like this, on May 4 northwest of Craig, will help diversify hunting, especially bringing more younger folks and women into the fold. 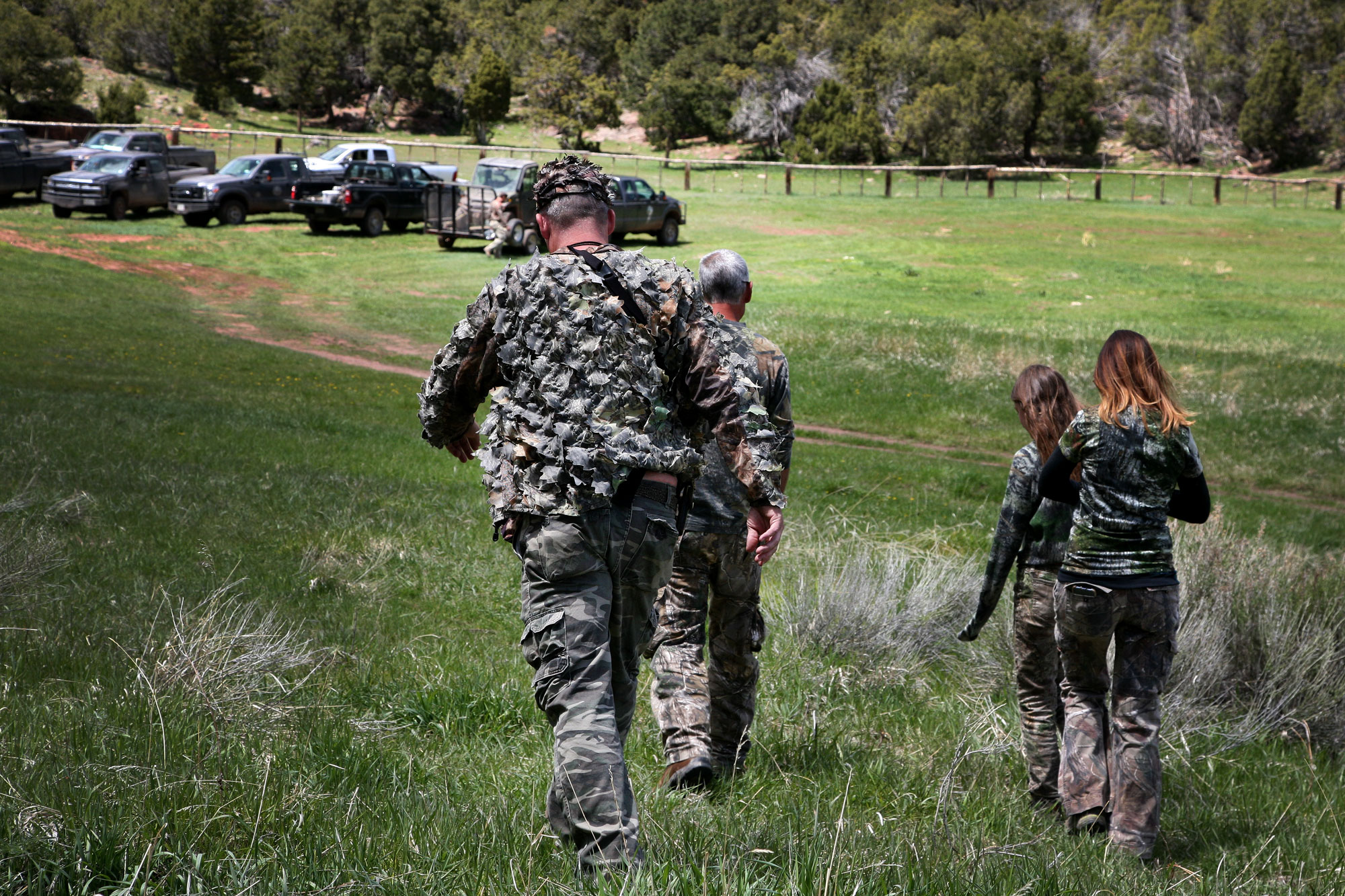 Stina Sieg/CPR NewsVeteran hunter John Arthurs, nicknamed Catfish, walks over to a large lunch feast with the Jones family from Fruita as part of the Colorado Parks and Wildlife Youth Hunter Outreach Program on May 4 northwest of Craig. While the Joneses have hunted before, they’d never been on a successful turkey hunt until now. Parents John and Jenny Jones say they’ll likely add turkey season to their annual hunting plans. 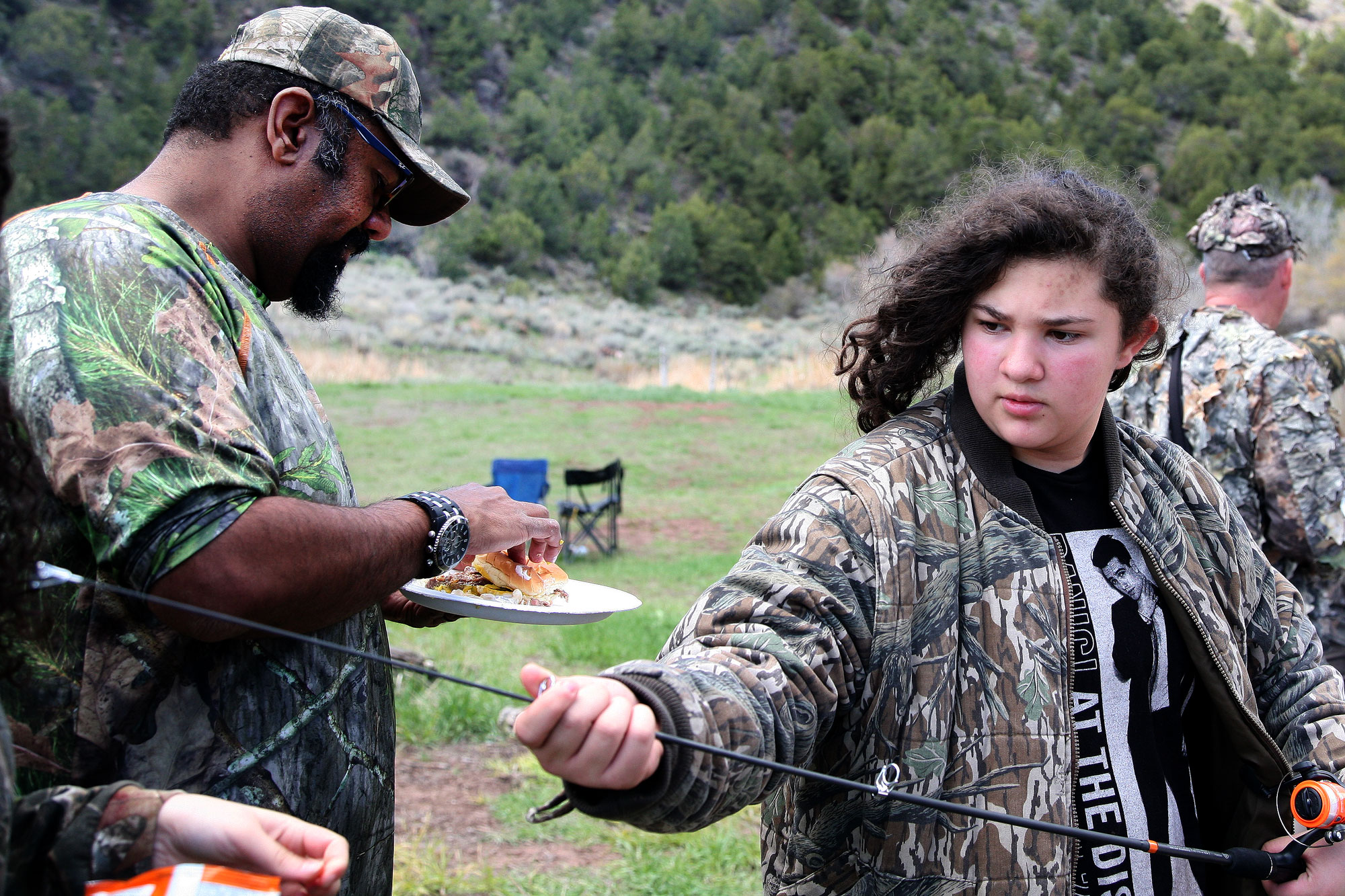 Stine Sieg/CPR NewsJenna Hassan, visiting from Aurora, gets ready to fish after returning from her successful turkey hunt May 4 northwest of Craig as part of Colorado Parks and Wildlife’s Youth Hunter Outreach Program. Not only was this the 13-year-old’s first turkey, but it was her first time hunting. The same is true for her 16-year-old sister Dayna. Dad Al Hassan, at left, says seeing his girls get into the sport made it the best hunt he’s ever been on.

It was about as pitch-perfect a morning as Colorado Parks and Wildlife could want. Every spring, the Youth Hunter Outreach Program pairs experienced hunters with young beginners, which this time ranged in age from 11 to 15. The idea is to get them a hunting mentor and an experience their parents may not be able to provide.

Murray thinks the loss of the hunting tradition fuels a disconnect between young people and food on their plate.

“When you actually see the birth and the death and where your food comes from and the circle of things, you get a better appreciation for things,” he said.

Murray sees that appreciation as crucial. Parks and Wildlife, like most wildlife agencies across the country, is funded by the fees hunters pay. And hunting has been on the decline for decades. On average, only about 4 percent of Americans hunt, and it’s only slightly higher in western states like Colorado.

That’s about half of what it was 25 years ago.

Fewer hunters means less money, and officials say that could mean less conservation. That’s why CPW is interested in teaching kids like 13-year-old Savannah Jones, who also got her first turkey on this hunting trip.

“Yes, it was so much fun,” she gushed. “I would definitely want to go again!”

As dawn turned into full-blown morning, hunters young and old rolled up to the group’s meeting spot at a remote ranch house tucked into the green, rolling hills outside of Craig. Everyone had been awake since at least 4 a.m., but the kids were bright-eyed.

Jones’ 11-year-old sister, Hailey, got to see her very first turkey in the wild. She admitted that the moment she pulled the trigger, she was “shaking, like vibrating and so nervous that just something would go wrong.”

But nothing did, and both sisters were about to take dozens of pounds of raw turkey home to Fruita. In fact, six of the seven kids bagged a turkey. The rush of success was everywhere.

John Arthurs, known around here as Catfish, was invigorated by it.

“Awesome, isn’t it?” he said to a gaggle of fellow hunters, a handlebar mustache draped over his smile and fake leaves dangling off his camo hat. “At 6:05, he’s down!”

He’d just helped his grandson bag his first-ever turkey, which Catfish said would be called a “thunder chicken” in his home state of Missouri. It’s his 42nd year hunting them, and for decades, he’s been showing kids the ropes, too.

“Cause they’re the next generation of hunting,” he said. “If we lose this generation, our sport could be lost.”

And with it would go knowledge passed down for millennia, the kind Catfish learned while hunting and fishing alongside his dad.

“And I miss those times,” he said.

His father would be pleased that he’s helping continue the tradition, Catfish said. He died in 1985. Using a small piece of plastic, Catfish mimicked a gobble for 13-year-old Jenna Hassan. The burst of sound was overwhelmingly convincing.

But of course, he didn’t let her. She kept going, rubbing a small piece of pointed wood over a round slate turkey call.

Hassan, whose mom is from Delta and dad is from Kuwait, had never hunted before. She lives in Aurora and can only think of one other teenager at her middle school who’s hunted. She walked over to her turkey, lying in a lifeless row with the others harvested that morning.

“It’s such a beautiful bird,” she said with some remorse. But as she stroked its feathers, shining metallic in the sun, she also talked about a feeling of pride.

“Just accomplishment,” she said, “and know that I can, that I could do more.”

It’s the kind of thing her dad, Al, never imagined would matter to daughters. But even before Jenna and her sister Dayna shot their turkeys, “I was thinking this is the best hunt I’ve ever been on.”

He’s been hunting since he was 18, when he emigrated to Colorado. Though he’d always known there were women hunters, he’d never actually seen one, until today, as he watched his daughters hike up and down the rolling hills and doggedly search for tracks.

“I think they caught the bug, unfortunately, or fortunately,” he said, proudly. “So they’re done for life, I think.”

Wildlife officials sure hope so. The future of the sport is at stake.