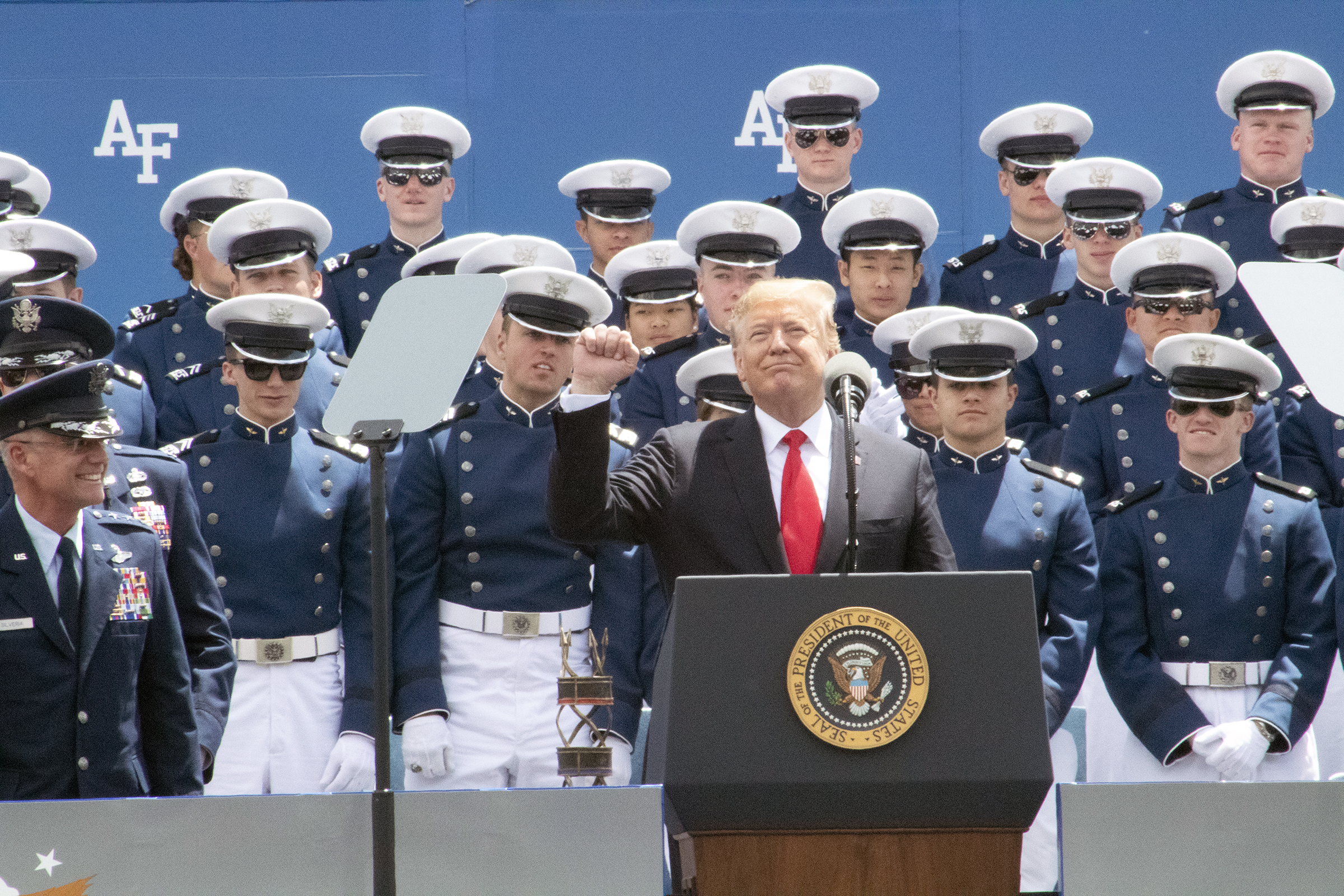 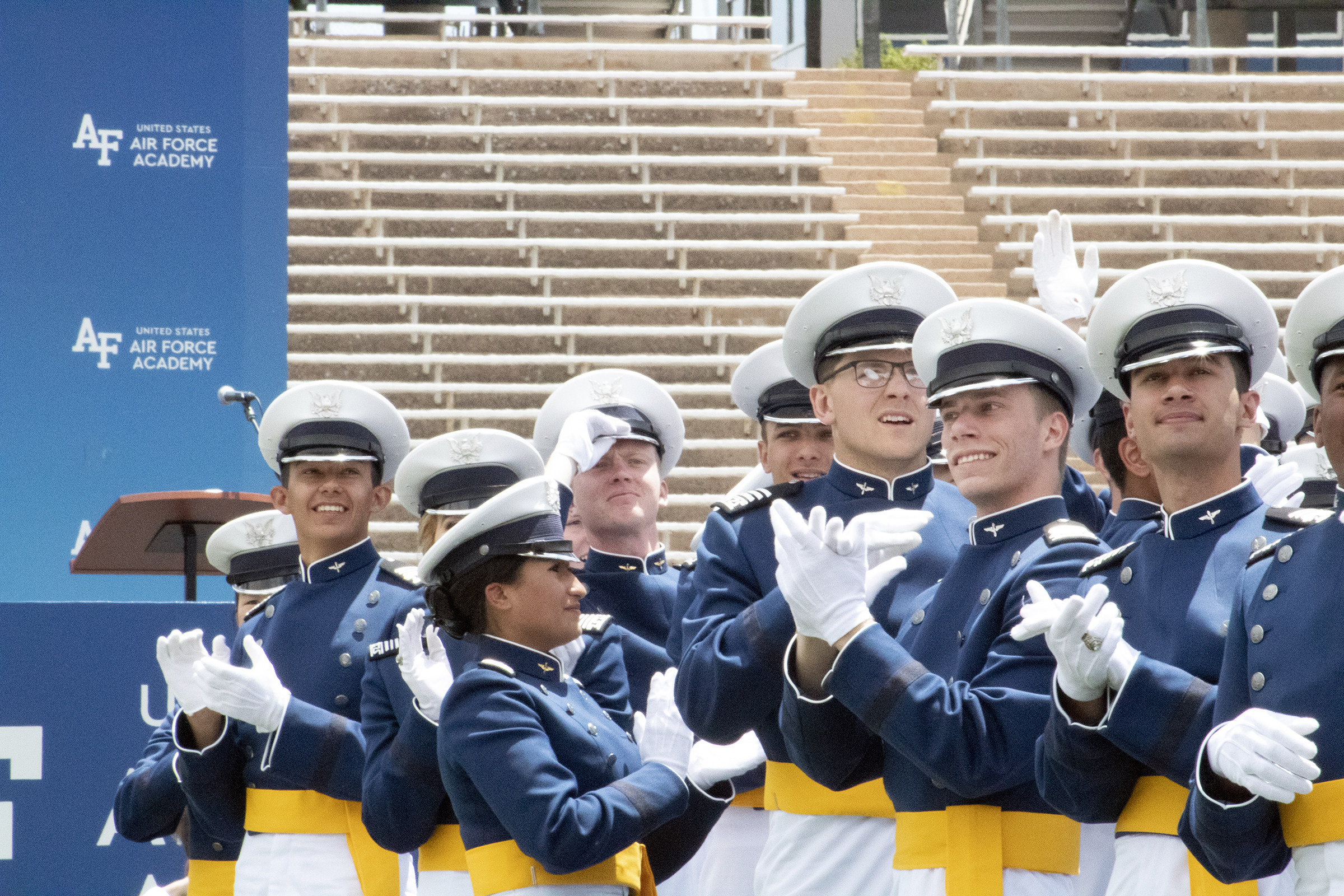 Abigail Beckman / 91.5 KRCC Cadets clap and thank their parents during the ceremony. 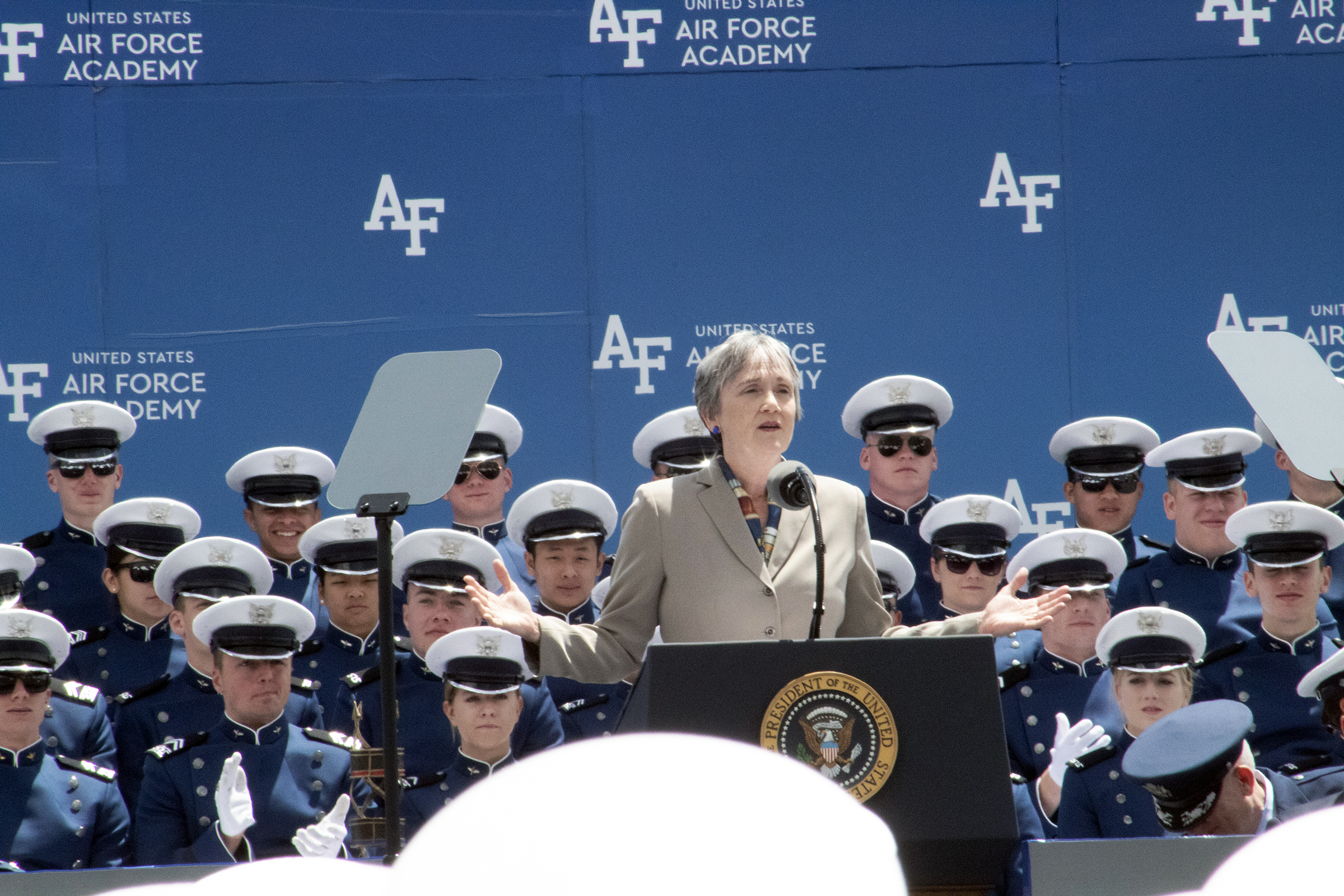 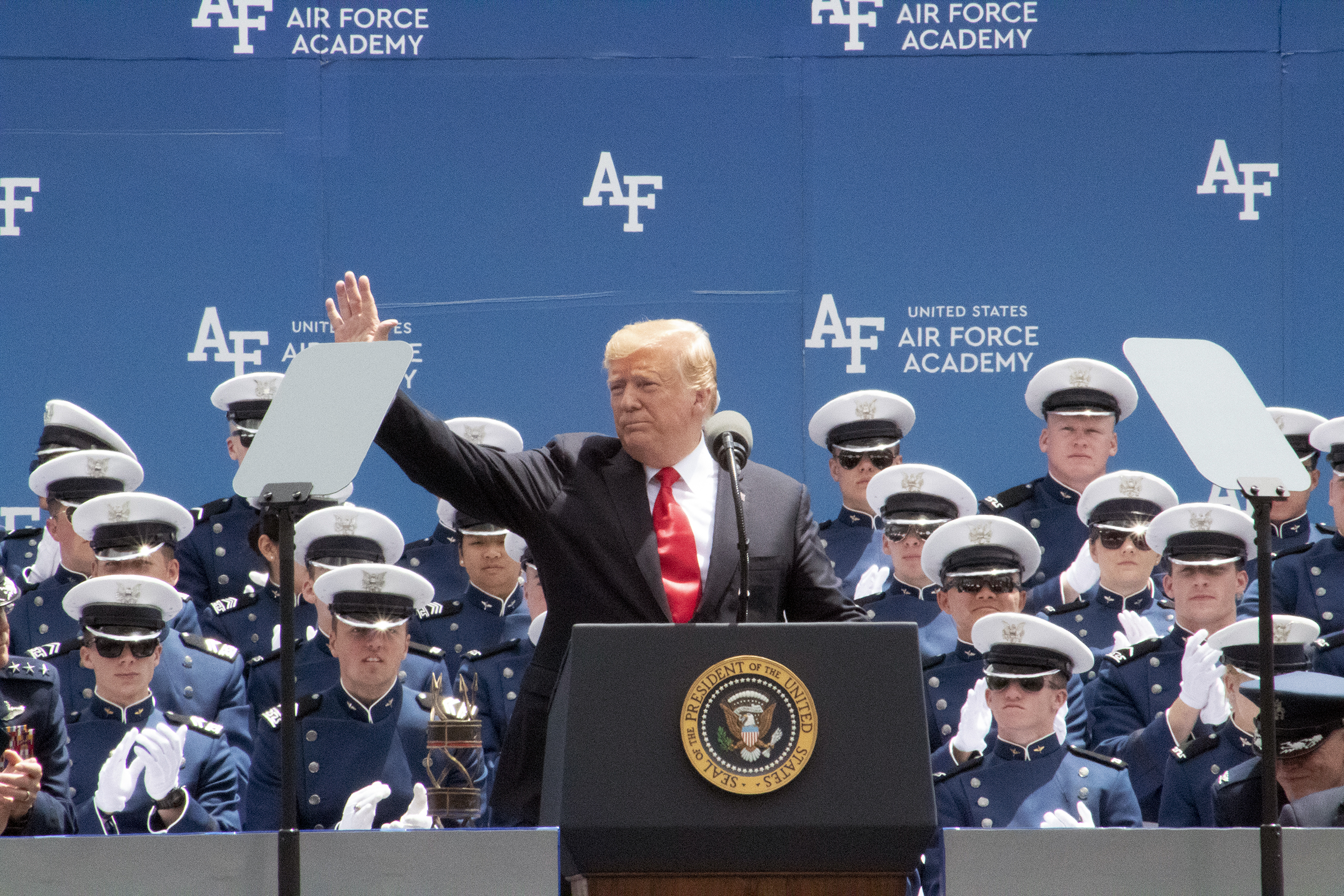 Abigail Beckman / 91.5 KRCC President Donald Trump waves to the crowd as he begins his address. 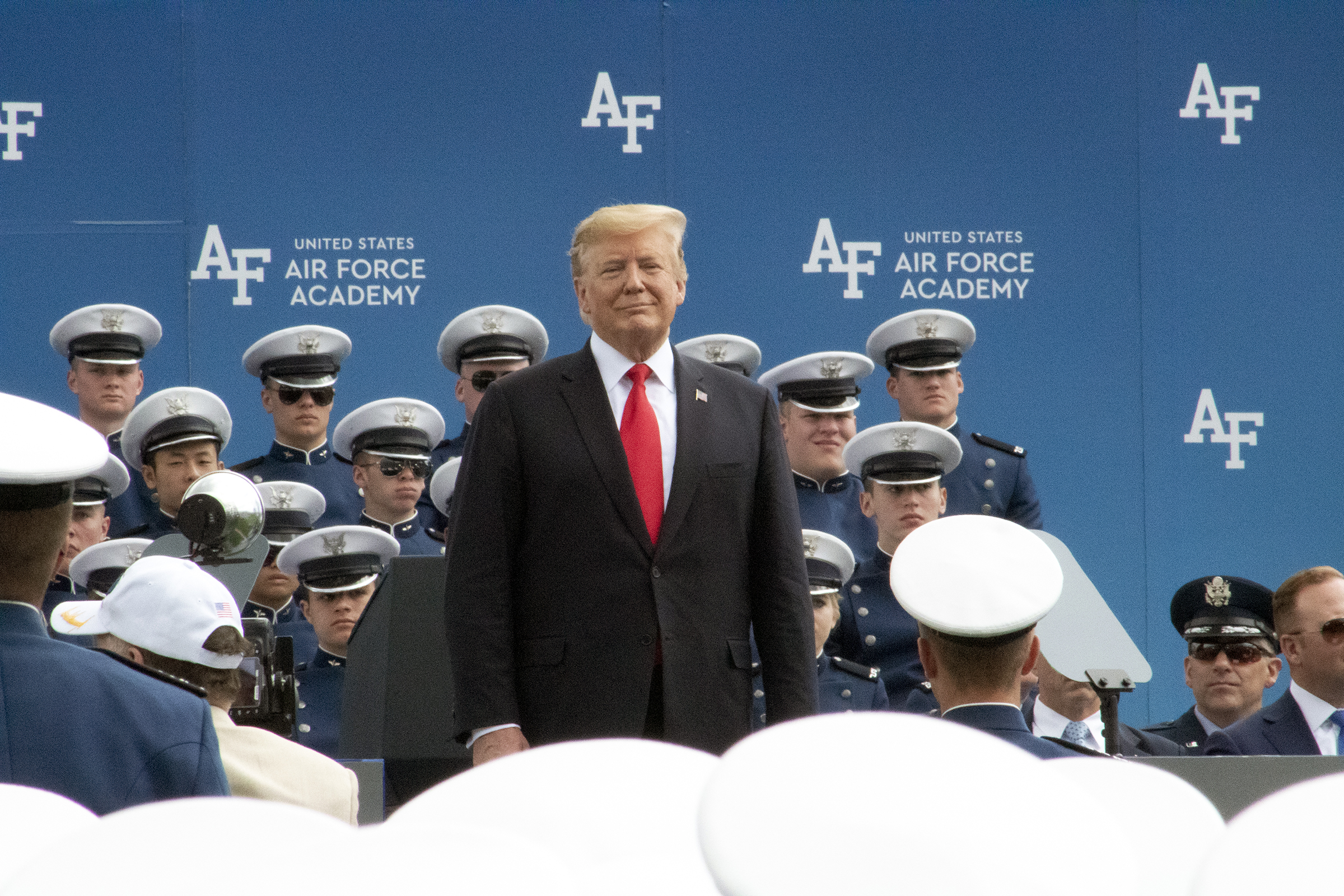 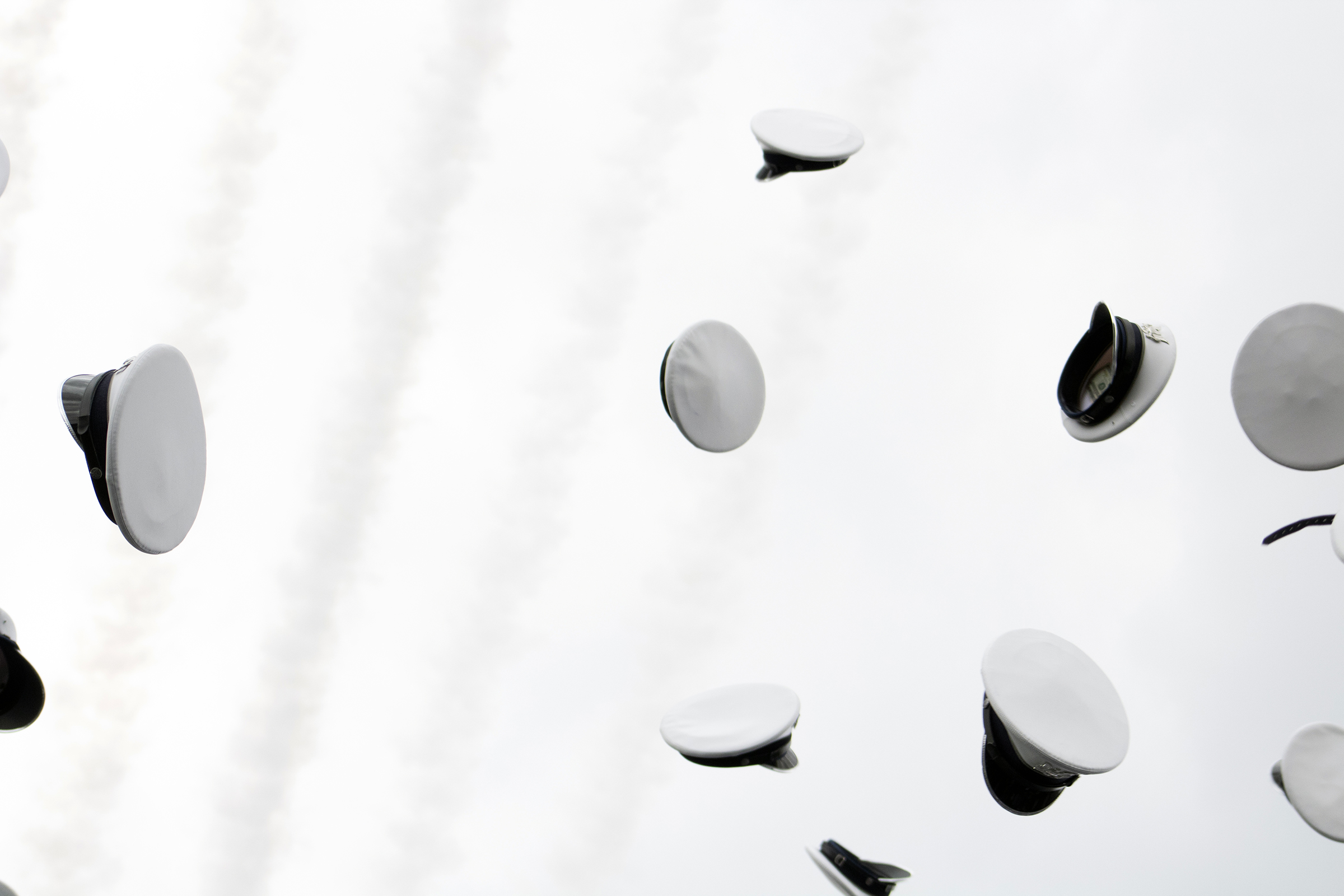 Abigail Beckman / 91.5 KRCC Caps are tossed in the air as the thunderbirds flew over Falcon Stadium. The jetstreams from the planes can be seen in this photo.

President Donald Trump gave the commencement address at the United States Air Force Academy in Colorado Springs Thursday. It’s tradition for the commander in chief to address graduates at one of the military service academies each year during the president’s term in office. Thursday marked Trump’s first time speaking at the Academy.

In prepared remarks lasting roughly 30 minutes, Trump congratulated graduating cadets on their achievements and praised their decision to serve in the United States Air Force.

“You could have chosen any school, any career you wanted, but you chose a harder path and a higher calling: to protect and defend the United States of America,” he said. “Today you take your place as officers in the most powerful Air Force in the history of our country -- and frankly, and very easily, in the history of the world.”

Trump took several opportunities throughout his speech to tout his administration’s commitment to U.S. military might. He highlighted recent investments in new fighter planes, Reaper drones, and other equipment, and he invoked familiar themes of American exceptionalism and “Making America Great Again.”

“Each of you is graduating at a truly incredible time for our country,” he said. “Our country is doing well, our country is respected again. And we’re reawakening American pride, American confidence, and American greatness.”

Trump also reiterated his commitment to creating a sixth branch of the Armed Services, The Space Force.

“In this stadium today are many of the future leaders who will develop the doctrine, the strategy, and technology to restore America’s legacy of leadership in space,” he told members of the class of 2019, who had -- perhaps fittingly -- selected astronaut Neil Armstong as their “class exemplar.”

Trump also specifically noted the academic, athletic, and personal accomplishments of several graduating cadets, including two Rhodes Scholars, 153 All-American athletes, and a graduate who battled cancer during his time at the Academy.

Among the honorees was cadet Nic Ready, who last year won the College Baseball Home Run Derby. In one of only a few apparently off the cuff moments, Trump invited Ready onto the stage mid-speech.

“Baseball. Home Run Derby. That’s something... Wow, I want to feel this guy’s muscles,” he said to laughter and applause.

Trump concluded his remarks by congratulating the class of 2019.

“Your country is sending you on a vital mission: to defend America, protect our people, and to pursue our nation’s great and glorious destiny,” he said. “Nothing will stop you from victory. Nothing will stop the U.S. Air Force. And with your help, nothing will ever -- ever -- stop the United States of America.”

In 2017, Trump addressed the Coast Guard’s graduation. He spoke at the Naval Academy’s graduation last year.

This year, 989 students received diplomas from the Academy. The graduating class is 74 percent male, 31 percent minority students, and includes 10 people from other countries, including Kazakhstan, Rwanda and South Korea. 527 graduating seniors will be going on to pilot training. Graduates enter the Air Force as officers at the 2nd Lieutenant rank, and are required to perform at least five years of active duty service after finishing their studies.

Graduation speakers at the Air Force Academy typically rotate among the president, the vice president, the secretary of defense and the secretary of the Air Force, although Marine Corps Gen. Joe Dunford, chairman of the Joint Chiefs of Staff, addressed the graduating class in 2017. Former Defense Secretary Jim Mattis addressed the academy’s Class of 2018 graduation, and then-President Obama delivered the commencement speech in 2016.