To understand how Charlotte Bassin came to be obsessed with making world maps, you have to go back to the moment she met the man she would marry.

It was on an airplane and “very serendipitous because I was a huge traveler in my 20s and he had just taken a trip around the world.”

It was the kind of meet-cute worthy of a Rob Reiner film.

As the Golden-based visual artist exited the plane, she said to herself, “‘This is my future husband.’”

It’s not an exaggeration to say that Bassin is a big traveler. Not long after that fated flight, she went to Australia and New Zealand. She’s been all over Europe and Africa. She’s lived in Mexico and India. She’s visited every continent except Antarctica — which is on her bucket list.

But “this guy” she met on an airplane got her to settle down in Colorado. She was 27 and put aside travel plans for her first 9-to-5 job as a graphic designer. Bassin said she knew that once she and her boyfriend married and had kids, they were “not going to be able to travel like we used to.”

The hard realization of parenthood coalesced with a desire to find a creative outlet because her job wasn’t quite doing that for her.

“You’re doing lots of creative stuff, but you’re doing it for other people,” Bassin said. “I had this urge to just create for the sake of creating, and I was like, ‘I’ll make world maps.’”

She figured maps would keep her “connected to the rest of the world” when she was no longer able to jet to other countries on a whim. 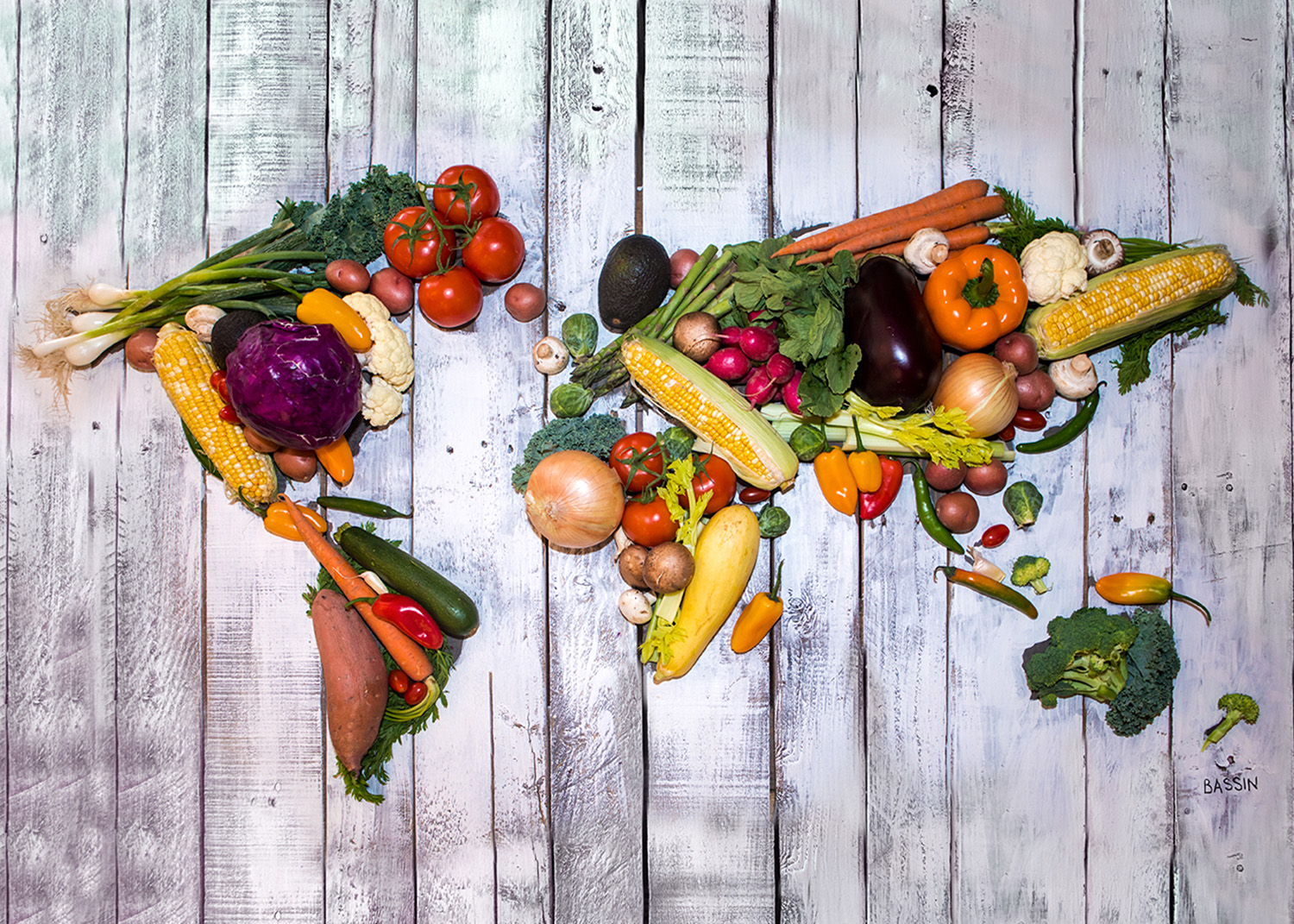 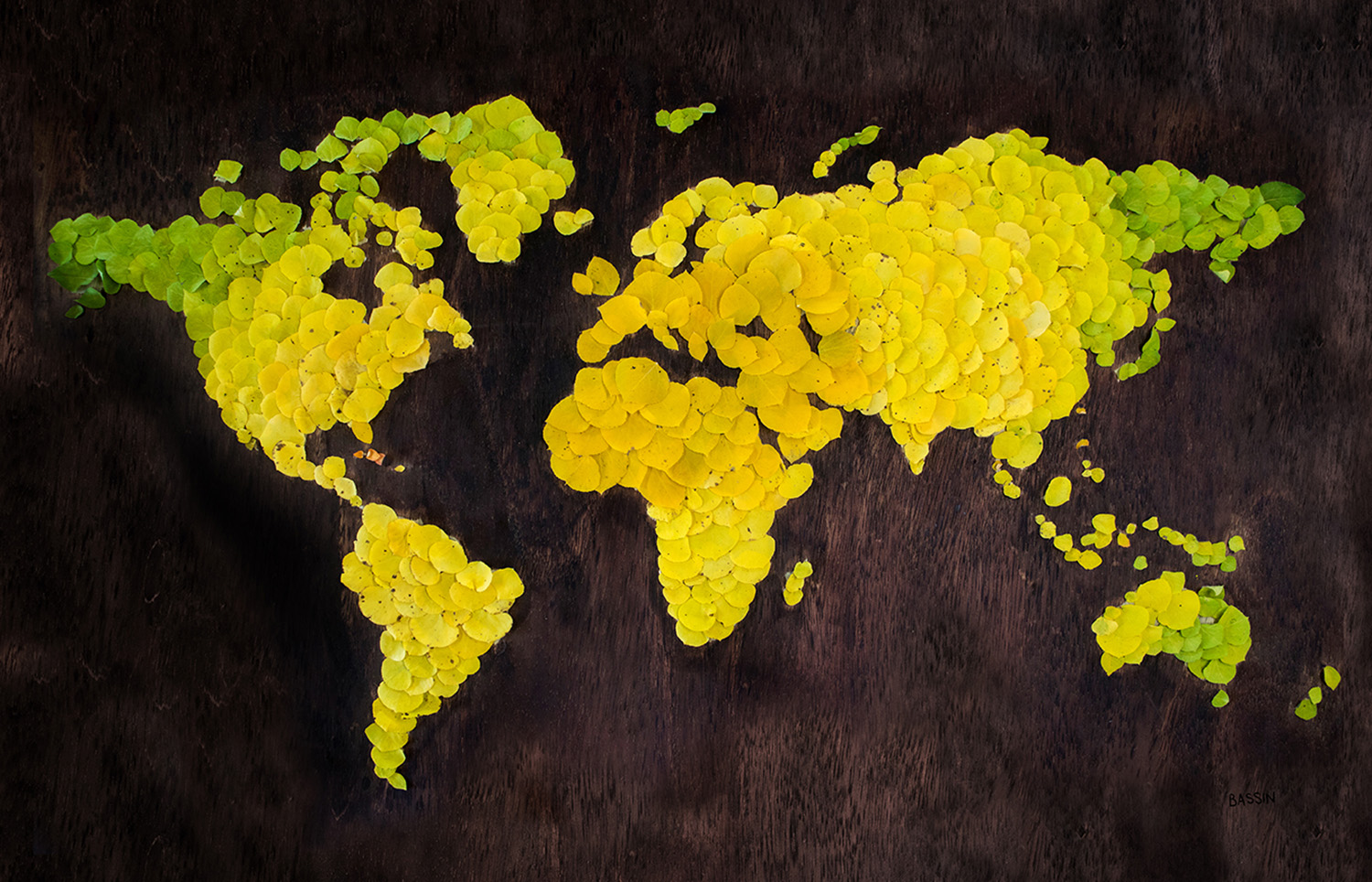 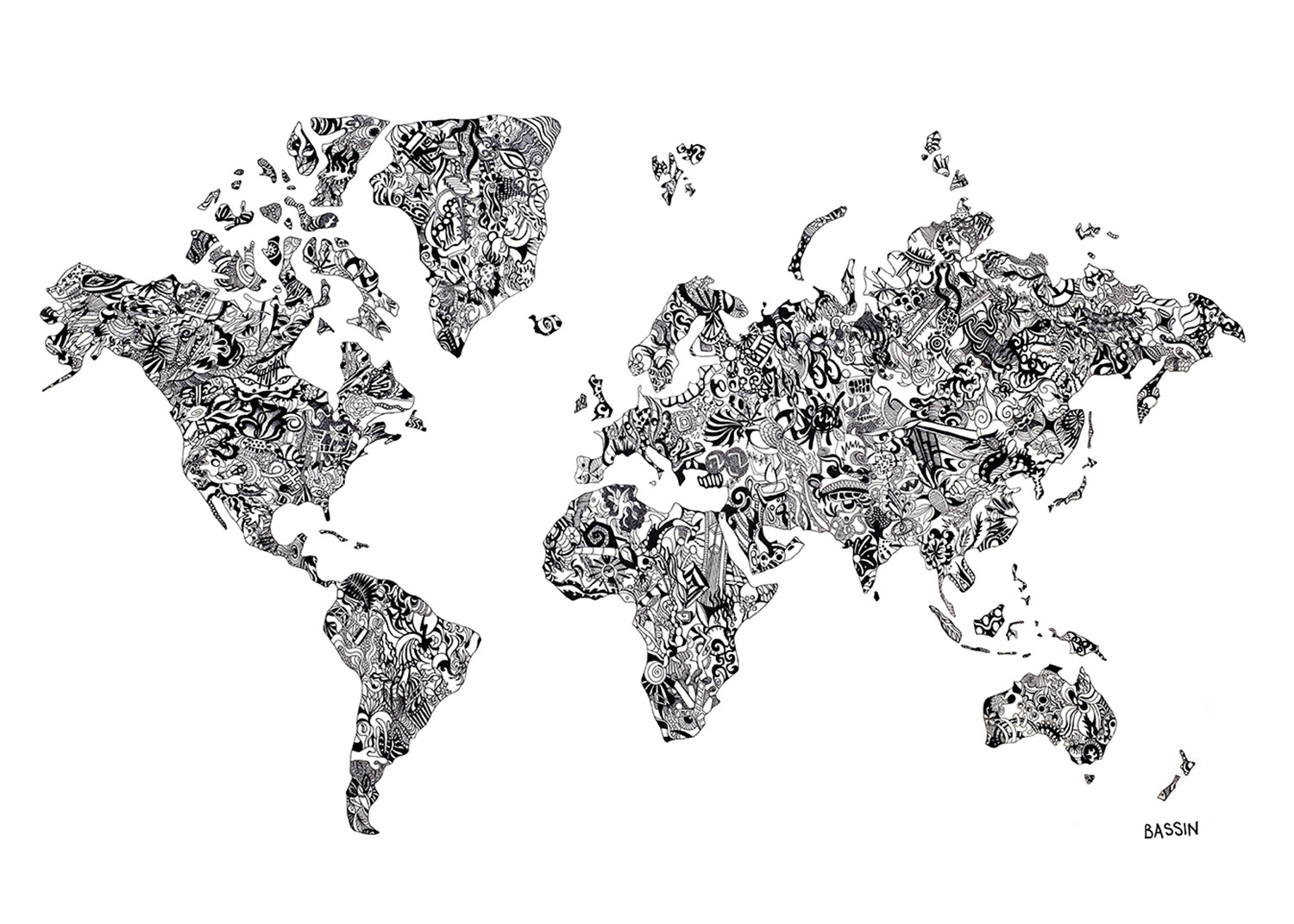 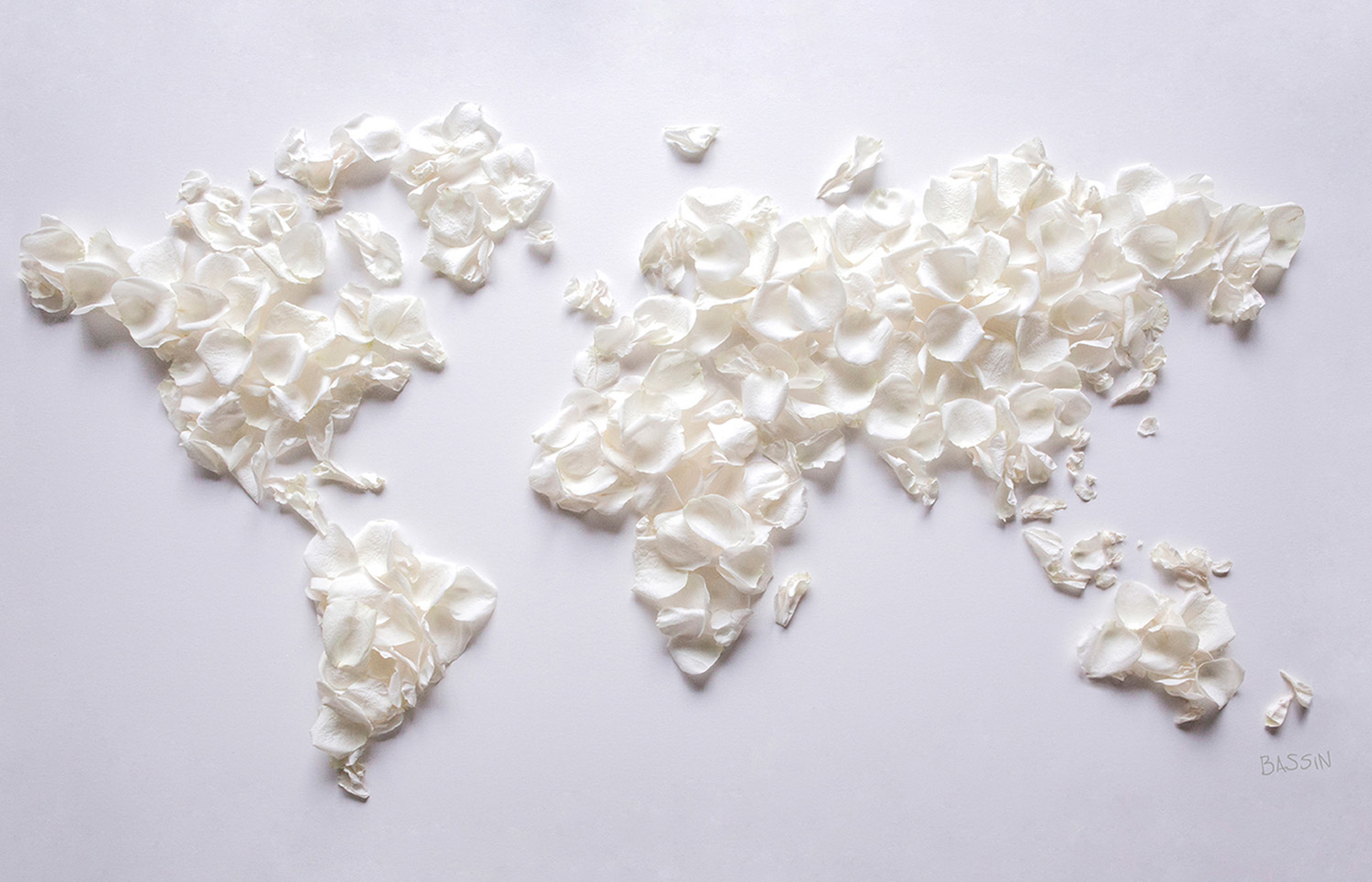 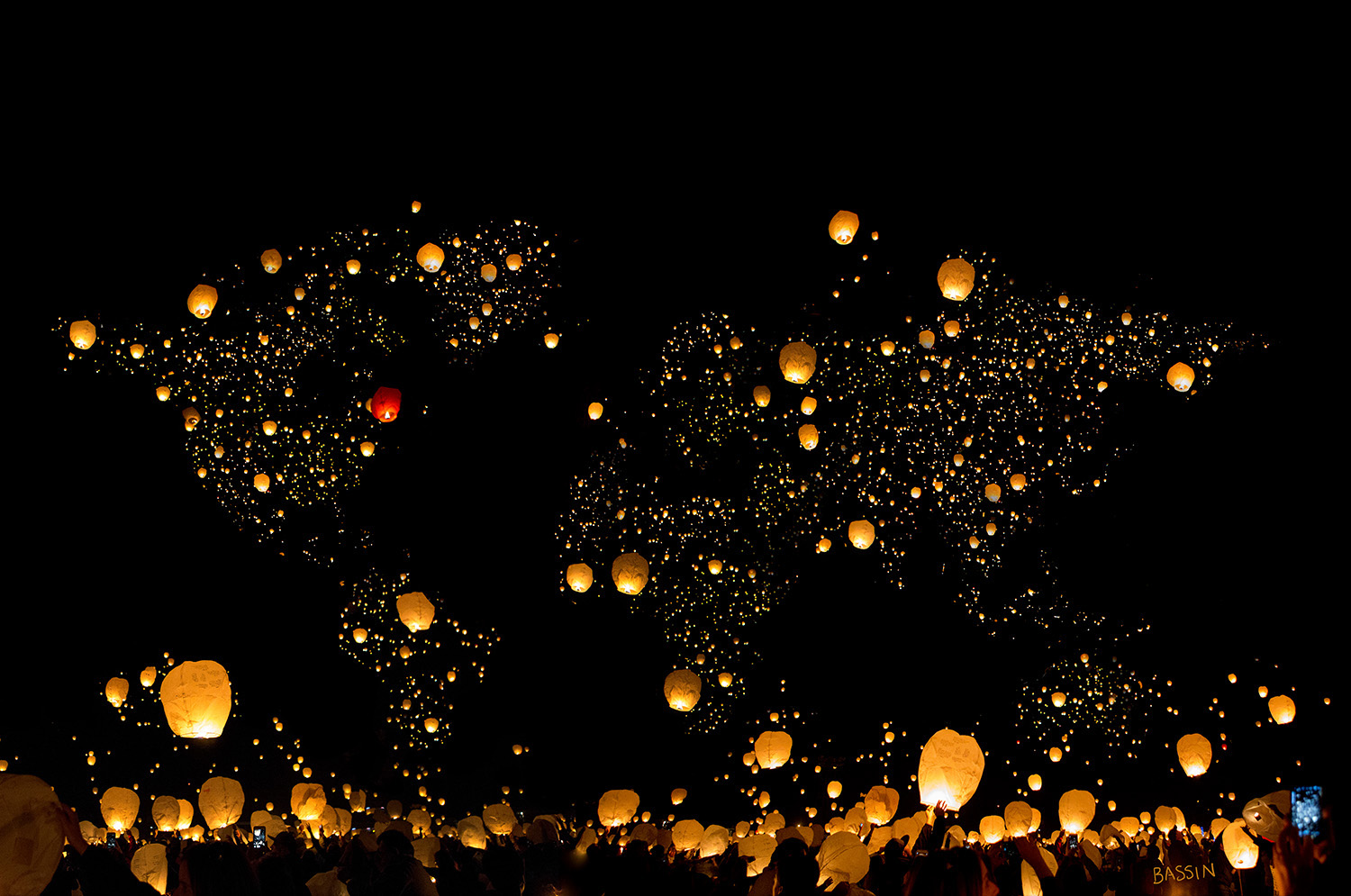 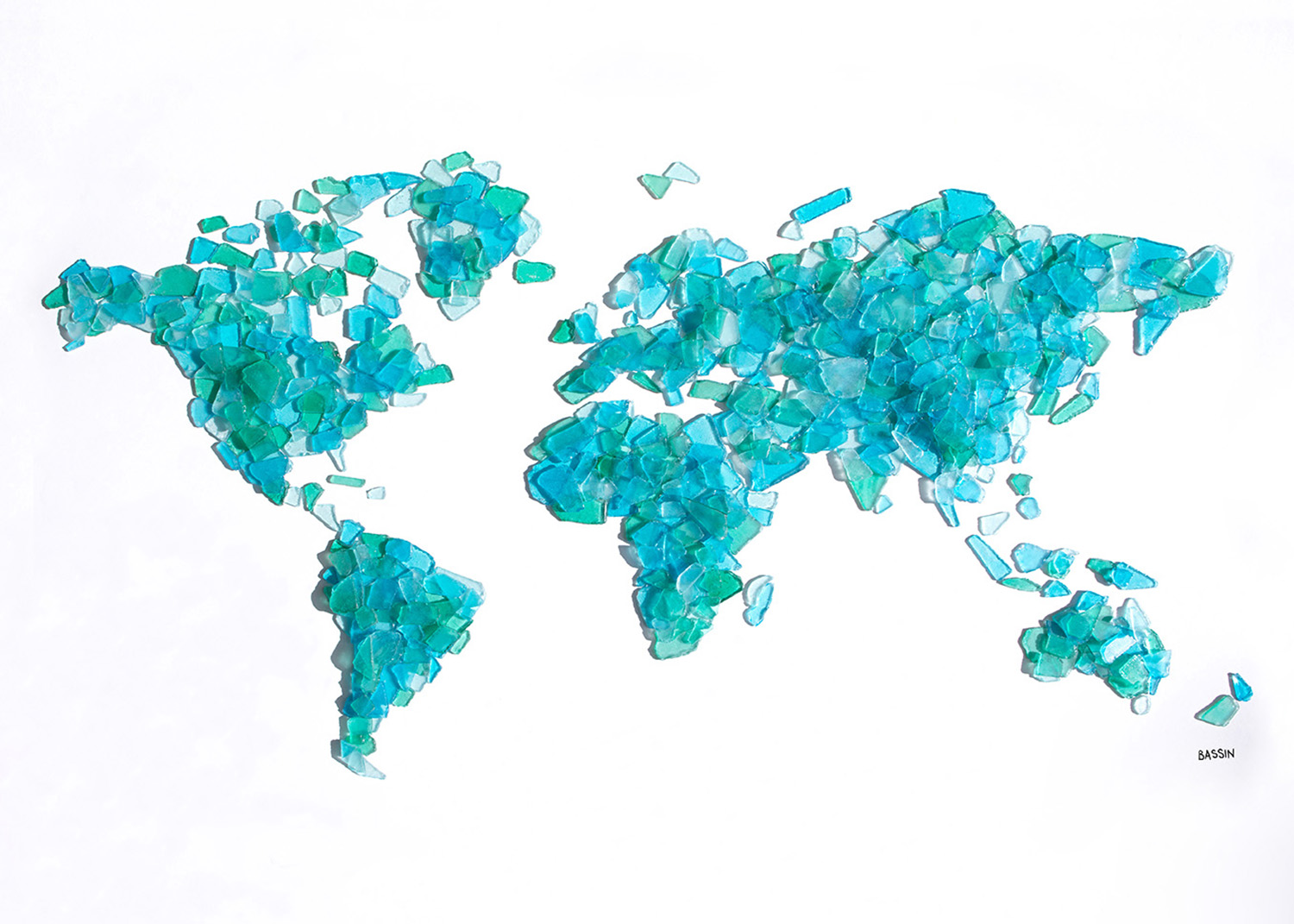 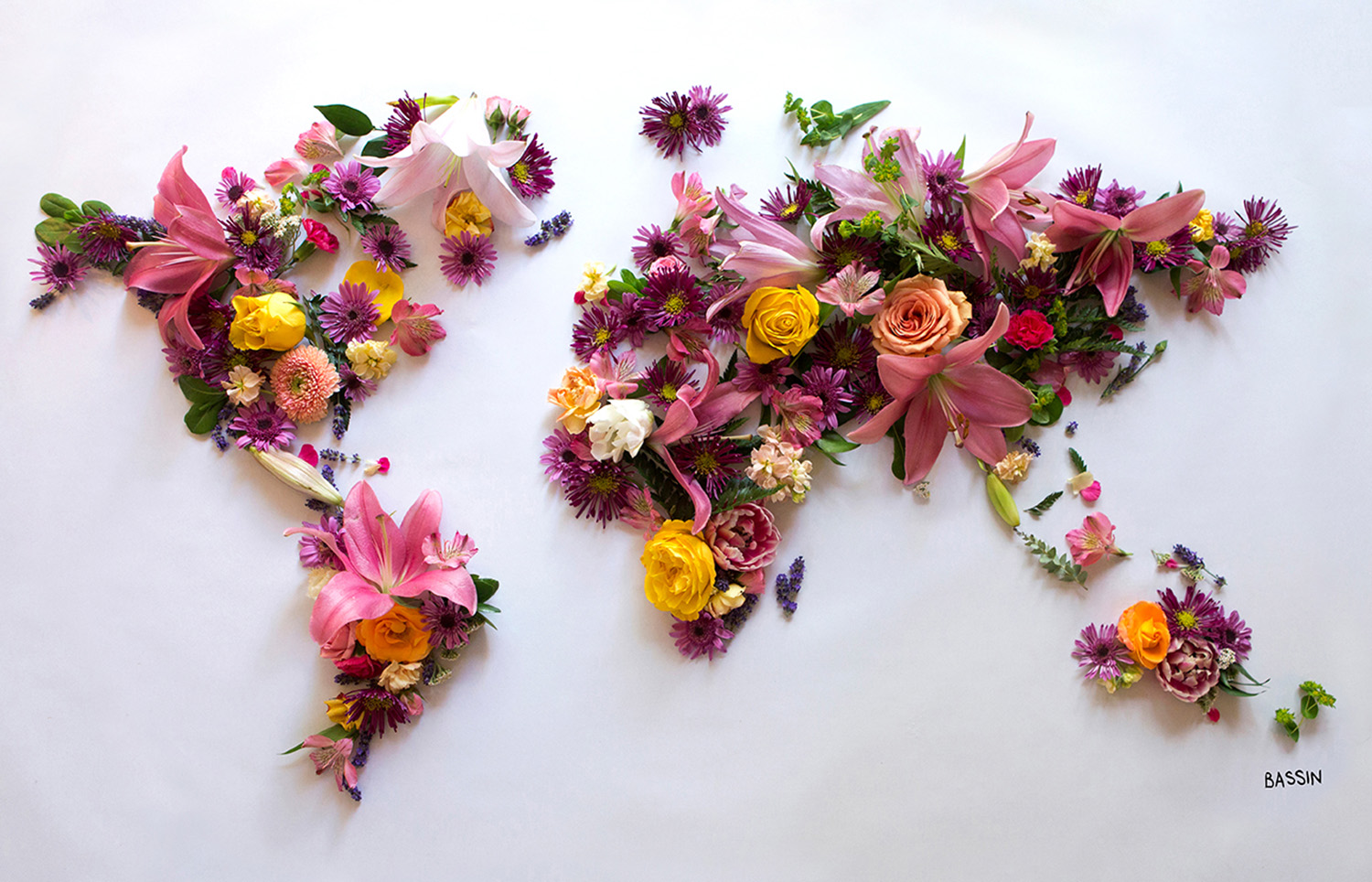 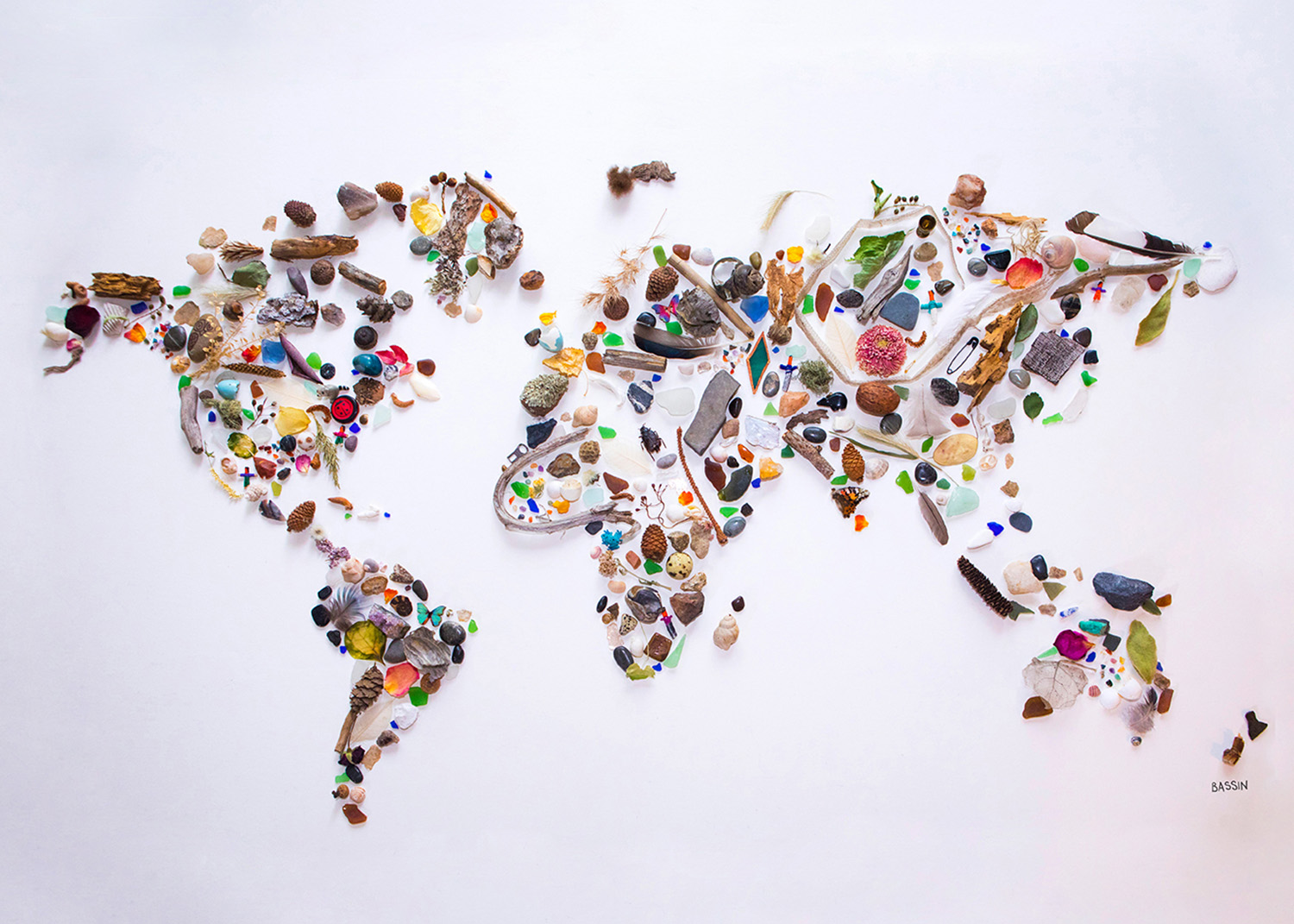 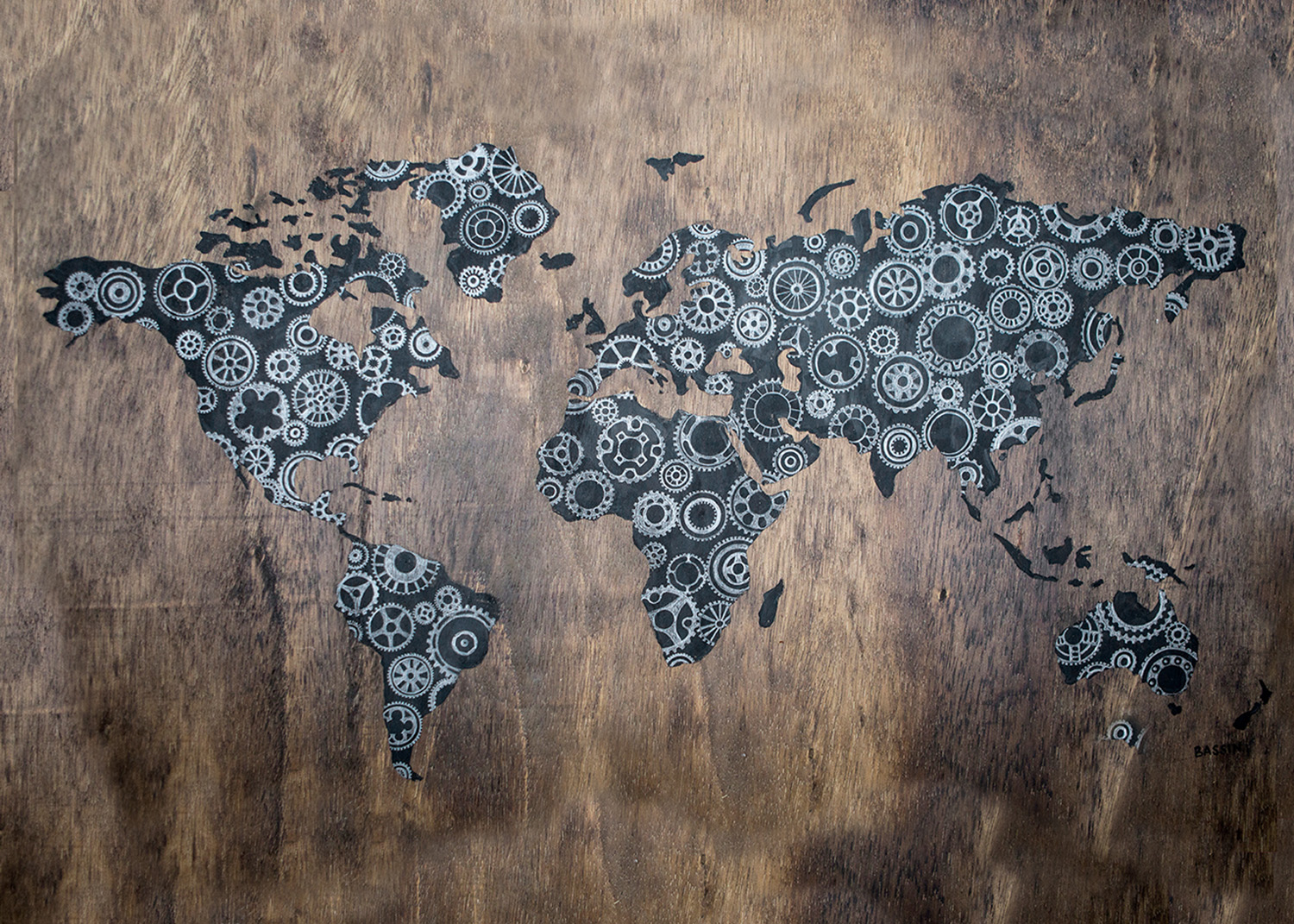 These are artistic world maps; four feet in length and each made from different materials. One time, she took thousands of tiny bits of paper she cut from magazines and catalogs to create a colorful gradient map. She’s done cross-stitch on burlap, as well as used flowers, recycled wood, river rocks, shells and currency from her travels. There’s the time she placed a rusty old bike chain to outline the continents and shaded in the land with graphite.

Bassin still has the first artistic map she made.

“It was filled with, what I call, doodles,” she said. Each continent is covered with black ink doodles she’d done habitually all her life.

She has a custom metal template of the globe that hangs on her wall. The template is based on the Miller Projection, a map projection often used for wall maps. Bassin said, for some of her earlier maps, she used a template based on the Mercator Projection, which stretched Greenland in such a way that it dwarfed Africa.

“It wasn’t realistic so I switched to one that seemed more accurate when I had the stencil fabricated,” she said, creating “a bit of a discrepancy between my older works and my newer ones.”

The hobby progressed to obsession about two years ago when she freed herself from the day job to become a full-time artist. Up until then, she had made about 20 maps in just about a decade.

And she has at least 100 more she’d like to make. She keeps a list of ideas: “I need to write it down, otherwise it gets stuck in my head.”

Abstract expressionism, the post-World War II art movement often associated with the likes of Jackson Pollock and Clyfford Still, is what she currently experiments with. She combines the painting style with collage and figure drawing. Right now, these works lay on a table in her Golden home and studio, but they will become maps, she said.

For previous work, Bassin “had an idea in my head and I created it.” It was more controlled, she explained. With the abstract expressionist work, she’s “really letting go and trying not to think too much.”

“Now I’m approaching it more as I have no idea” when she starts a map. “I’m playing with materials and something will come of it.”

All of her maps are created without, what Bassin calls, “political boundaries.” They’re just land and water.

She’s turned down gigs because “part of my mission with this art is to present a lot of what I learned in my travels. That no matter where you go, we are all human. We have similar basic needs of love and safety and freedom. Once we start putting in those boundaries, you feel the separation and the difference.”