The effort to cull geese from Denver parks — and donate the meat to needy families — continued in the predawn hours of Monday morning.

The latest roundup occurred at City Park. A pair of wildlife managers with the United States Department of Agriculture boarded kayaks and slipped onto the surface of man-made Ferril Lake. Their colleagues stood on the shore in waders, forcing the geese toward a corral erected on shore. One supported the effort with a red remote-controlled boat.

Relying on the rainbow glow cast from a fountain at the center of the lake, the team worked with efficiency, herding the geese like a pack of semi-aquatic border collies.

The molting birds were helpless to fly from their fate, and some hissed or honked at the workers, but all eventually found themselves trapped against temporary fencing on shore, packing in so closely that the birds climbed atop each other. At least one tried fruitlessly to squeeze through narrow openings in the fencing.

Workers inside the pens passed the birds to colleagues, who loaded them into orange plastic crates.

In total, about 300 birds — far from all the geese in the park — were carted away to a processing center to be killed and turned into meals for hungry households somewhere in Colorado. Officials have declined to say exactly where the animals end up.

What Do Colorado Residents Say About The Culling? Watch Our Instgram Story.

Scott Gilmore, deputy executive director or Denver Parks and Recreation, said it’s easy to see the need for the goose rodeos. He pointed down to the lake bank, which the geese had denuded and covered in greasy fecal matter.

“There’s no vegetation. They’ve eaten everything. There’s poop everywhere on the ground. There’s algae starting to bloom in the lake,” he said. “It’s about managing the damage the geese are causing to this environment.” 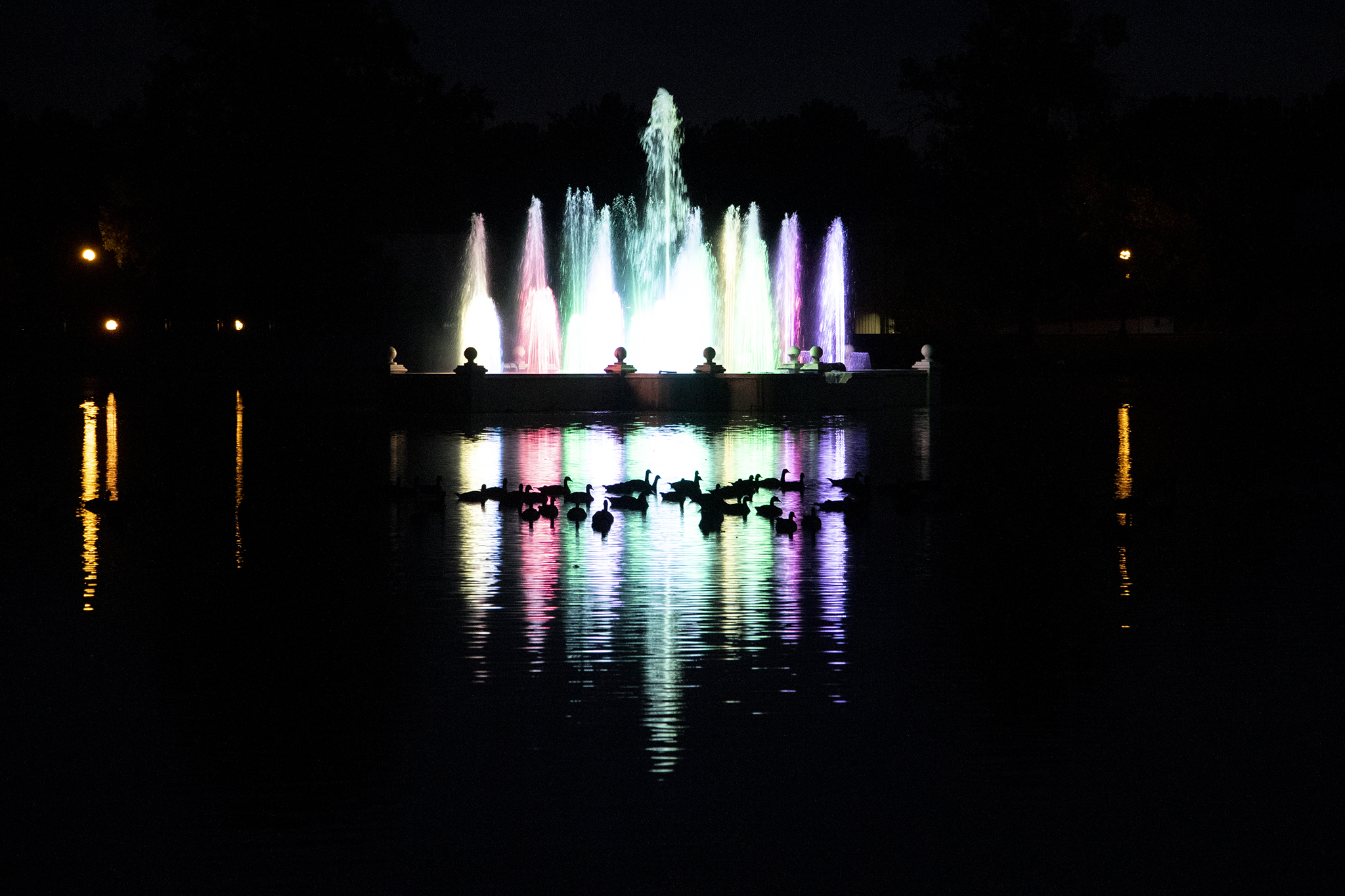 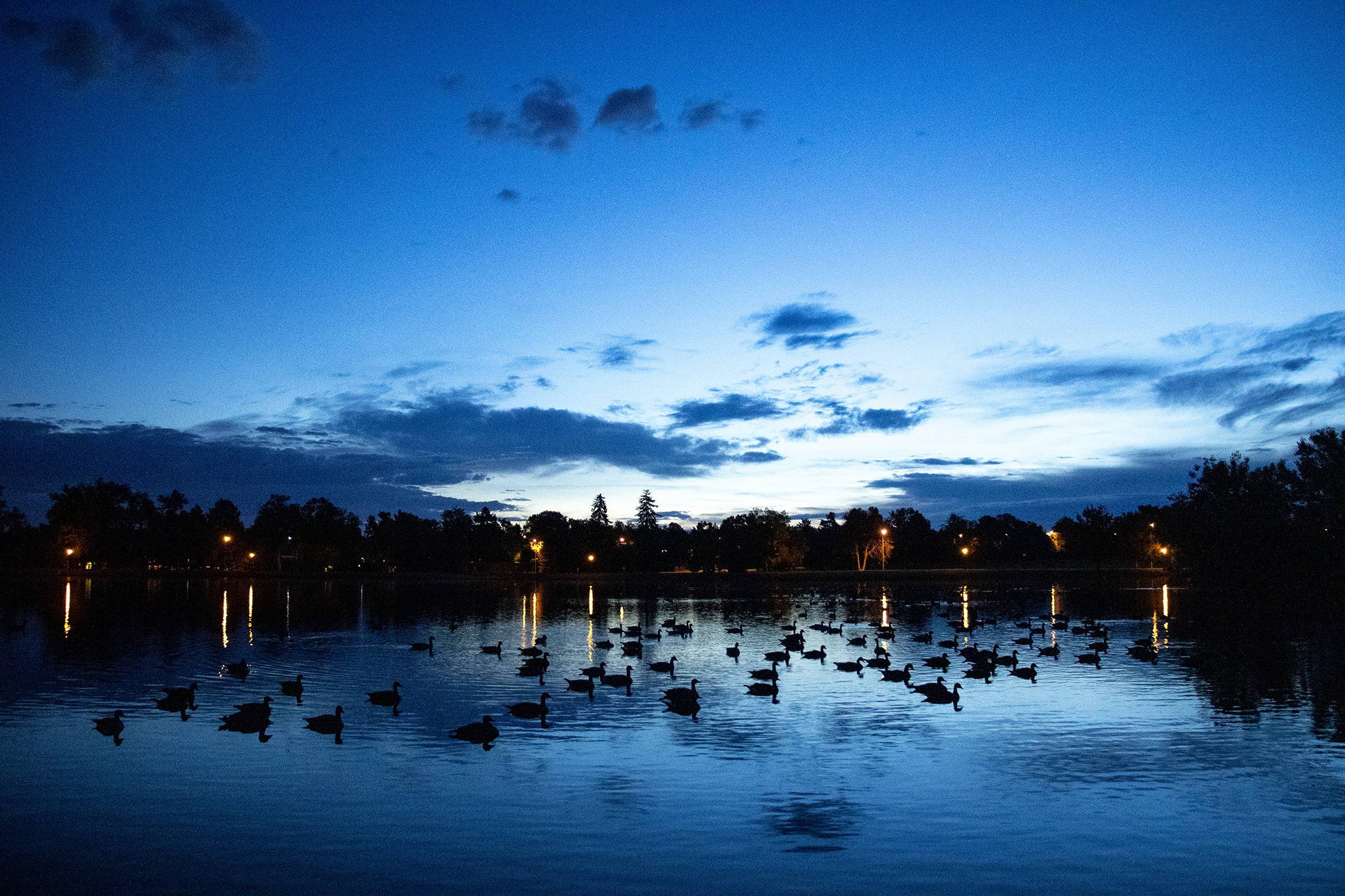 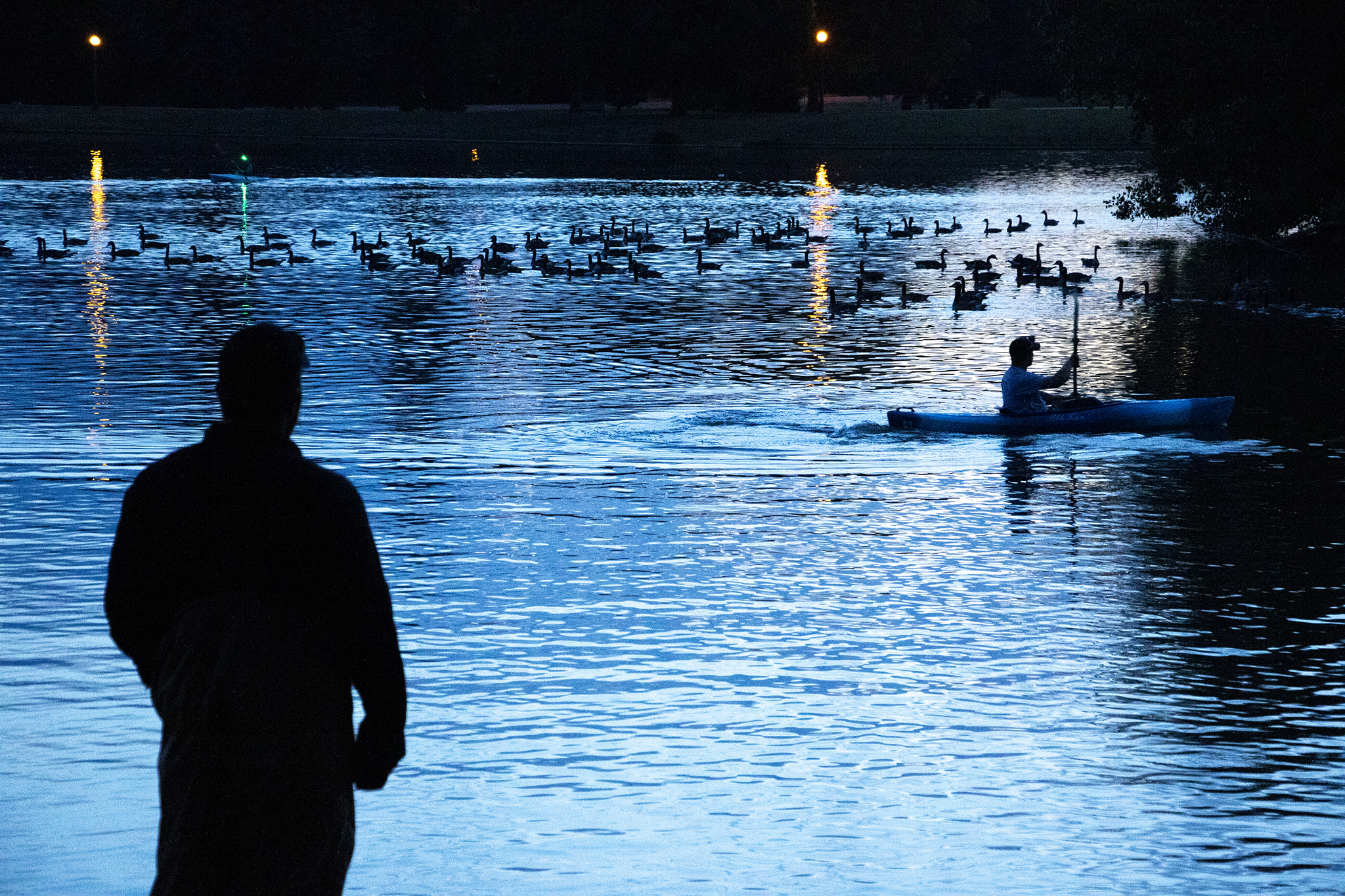 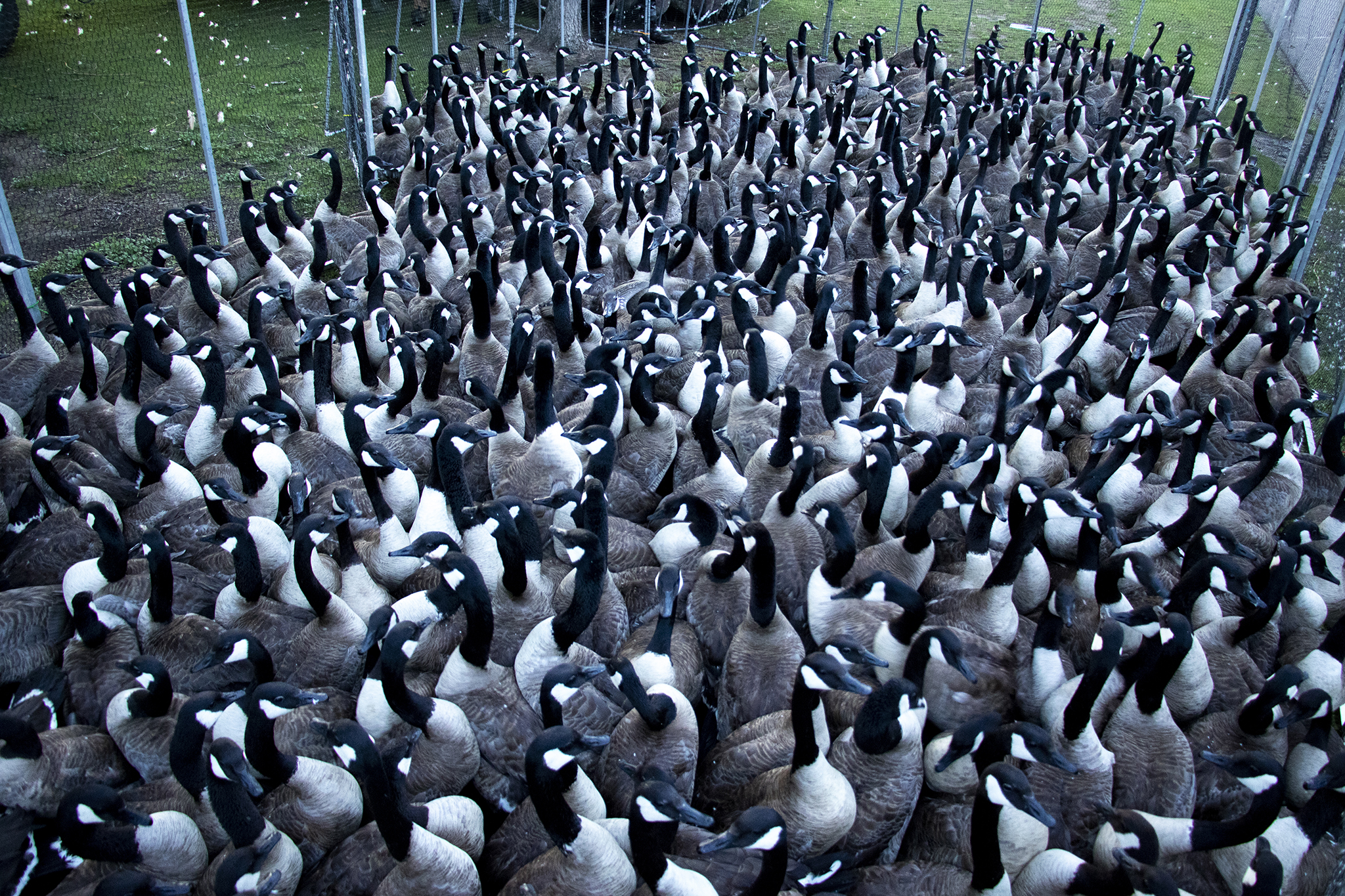 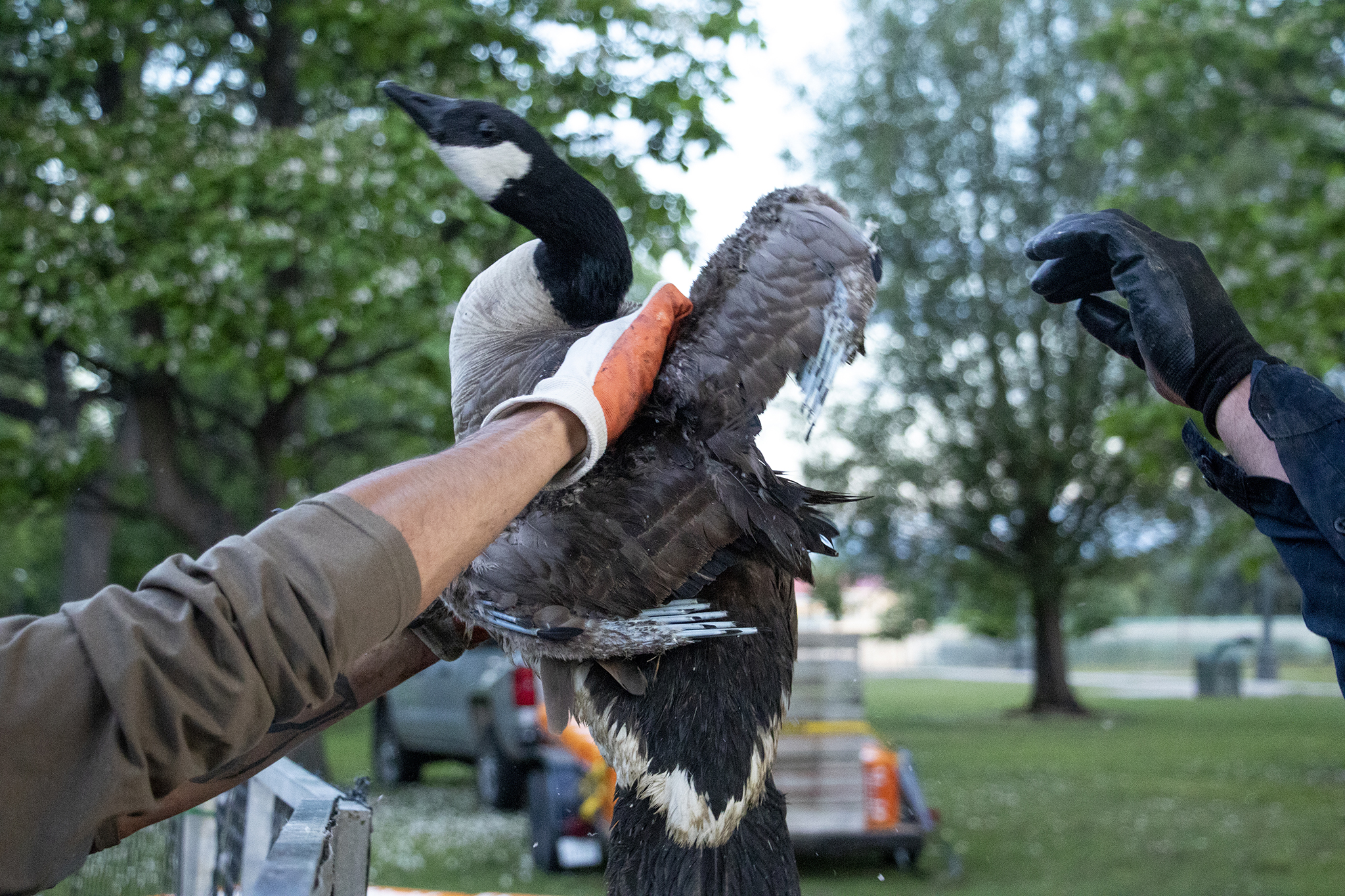 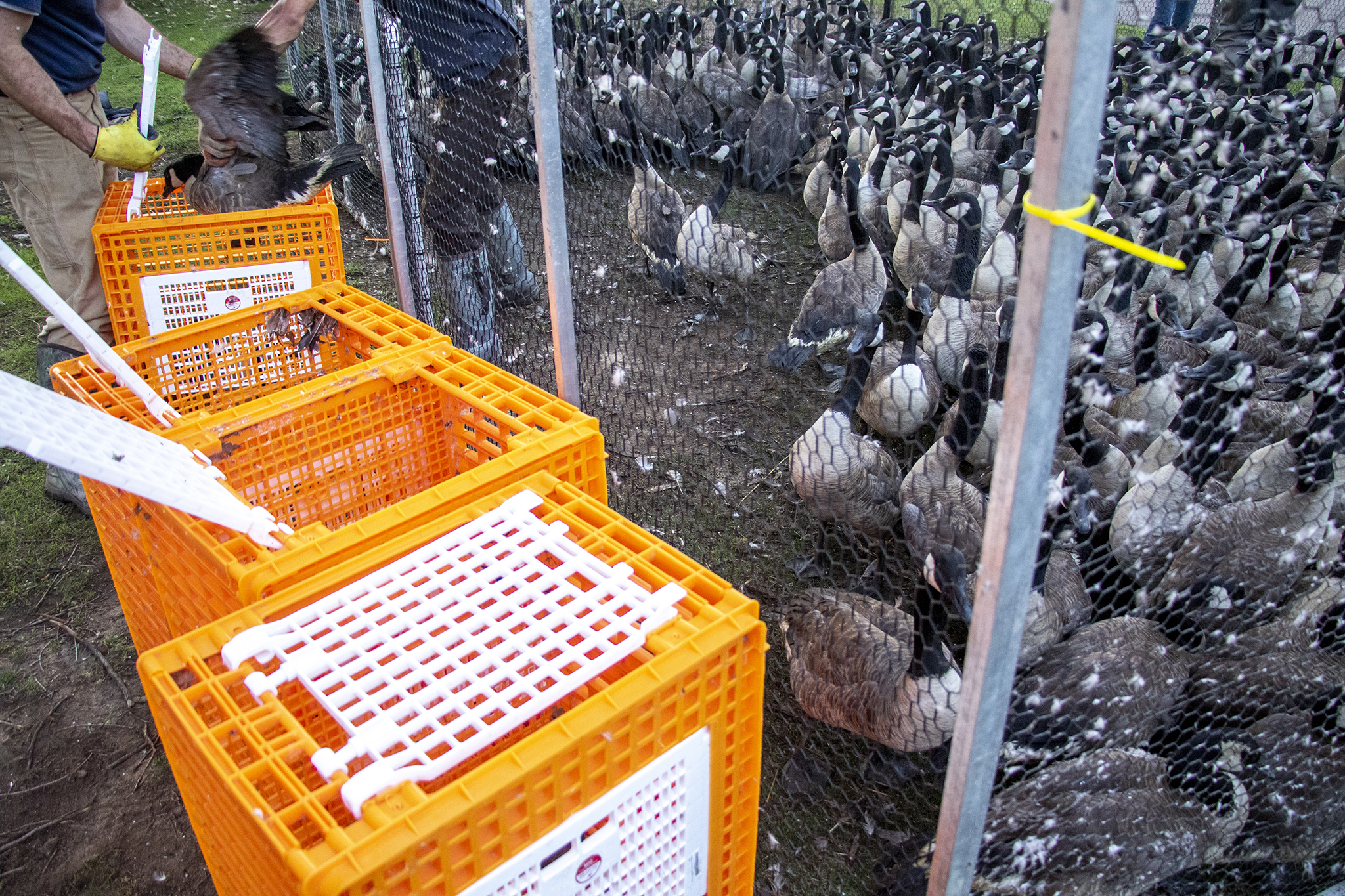 Gilmore estimates about 5,000 geese have made Denver their permanent home. A single bird produces about a pound of poop per day, which means city parks and other areas absorb around 140,000 pounds of goose droppings in the summer months. Thousands more migratory geese add to the load each winter.

The result is that some people have started avoiding the parks, said Gilmore.

Denver has tried other tactics to win back public space from avian invaders. For years, the wildlife managers have coated goose eggs in corn oil to stop embryo development. The mother geese don’t realize their eggs won't hatch, so the don’t lay any new ones. The department oiled about 3,000 eggs last year.

It's Not Your Imagination. There Really Are Lots of Geese In Denver. They Love it Here

This is the first year the city has resorted to culling the animals, and feeding them to hungry families is also new.

The strategy has earned some fierce criticism from animal welfare advocates. Mark Bekoff, a professor emeritus of biology at the University of Colorado Boulder, told Denverite that donating the meat was a “sales pitch” meant to make the practice more palatable to the public.

In response, Gilmore said his park-to-table plan was simply the best option. Under USDA rules, the birds can either be incinerated, tossed in a landfill or made into supper. He said he wanted to do something positive with meat rather than see it go to waste.

Since news of the cullings first broke, Gilmore said he’s been inundated with online comments and voicemails, some of which are threatening. He said two voicemails suggested he should be killed for how he has chosen to manage the geese. He said they weren’t specific threats, but did alert the police.

While he understands the cause for concern, he said the USDA managers are trained to carry out the task without undue harm to the animals.

“I am a wildlife biologist,” said Gilmore. “I’ve worked very closely with the professionals to definitely do this in the right way.”

The backlash is frustrating for Gilmore, who worked for 30 years as a wildlife educator and biologist for Colorado Parks and Wildlife. He said culling the geese was a last resort in the face of a growing problem, adding that managing the goose population is a part of the city’s 20-year plan for park management. No more than 2,200 geese can be culled in Denver under U.S. Fish and Wildlife rules. Gilmore would guess the city has captured about 500 so far from City Park and Washington Park but said the USDA is keeping the official count.

“The parks were built for people. They weren’t built for Canada geese,” he said.