Across the world, people are joining a youth-driven protest to call for action on climate change. The Global Climate Strike is inspired, in part, by 16-year-old Swedish activist Greta Thunberg.

The mass demonstrations in 156 countries will demand an end to the fossil fuel era ahead of U.N. climate action summit next week.

Students across Colorado walked out of class to help kick off an international week of climate action. Thousands of people marched down Denver’s 16th Street Mall from Union Station to rally at the state Capitol.

"Our parents need to understand that this is going to be our problem," Opp said.

Amanda Opp of Lakewood High School might look happy but she said she is real angry about climate change.

"Our parents need to understand that this is going to be our problem" pic.twitter.com/olTTabiLVi

Isha Kanu, a 17-year-old senior at Northfield High School, left class to show support for the Green New Deal. She says the proposal makes it so people don’t have to choose between the climate and the economy. 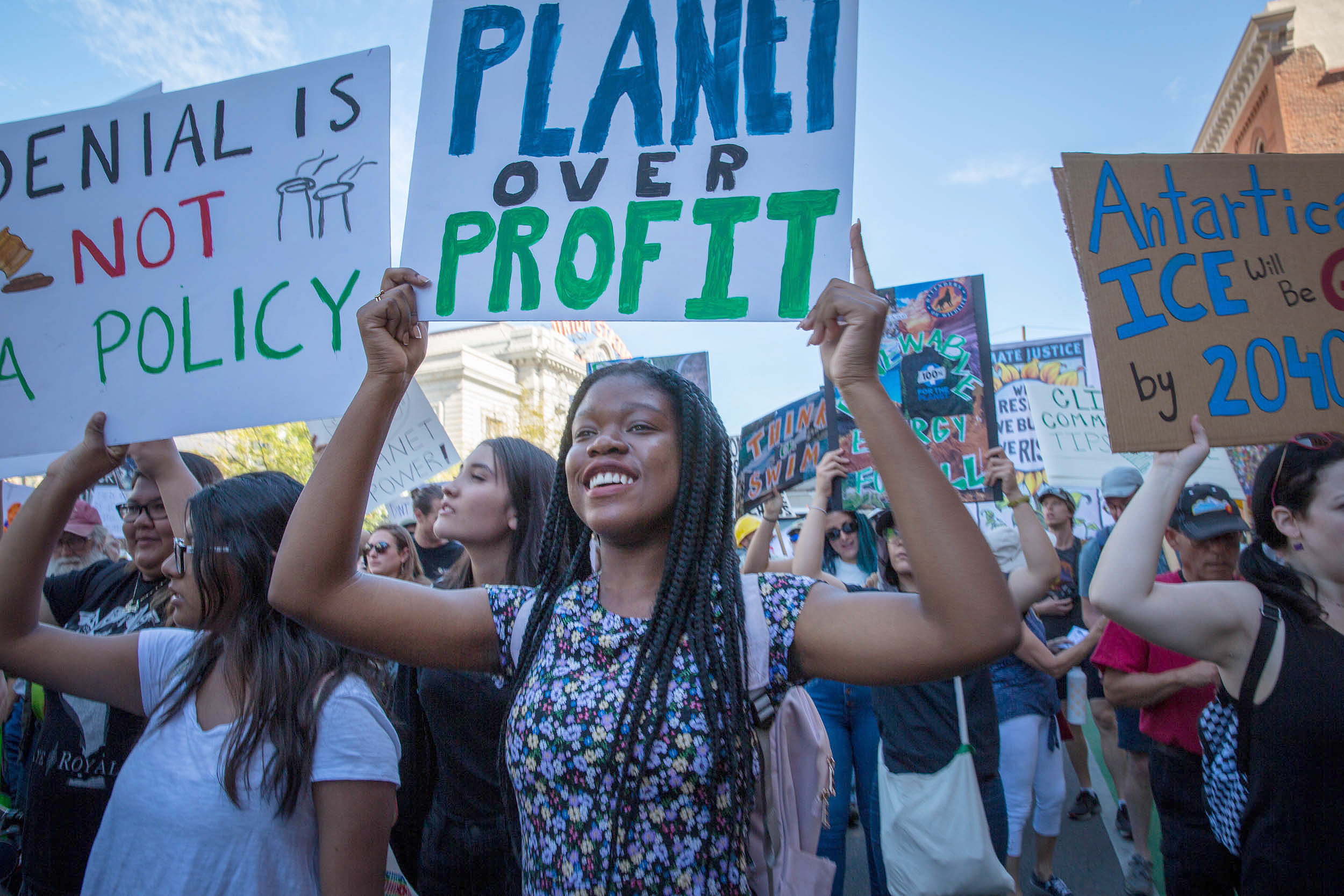 Hart Van Denburg/CPR NewsIsha Kanu, 17 and a senior at Northfield High School in Denver, was among the thousands who marched from Denver's Union Station up the 16th Street Mall to the Colorado state Capitol on Friday Sept. 20 2019 in support of an international youth-organized strike aimed at combating climate change. She also spoke at the rally. 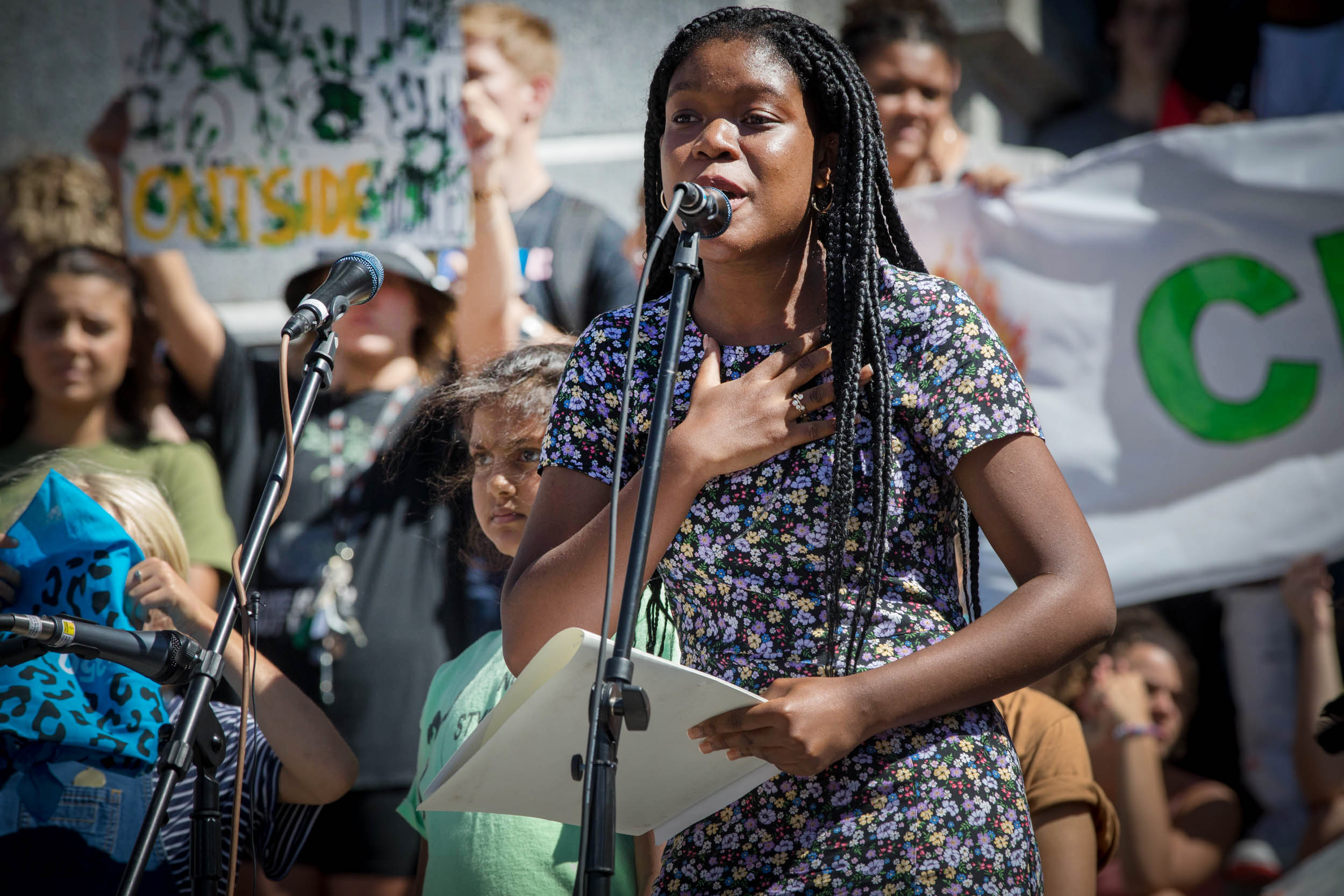 Hart Van Denburg/CPR NewsIsha Kanu, 17 and a senior at Northfield High School in Denver, was among the thousands who marched from Denver's Union Station up the 1th Street Mall to the Colorado state Capitol on Friday Sept. 20 2019 in support of an international youth-organized strike aimed at combating climate change. She also spoke at the rally. 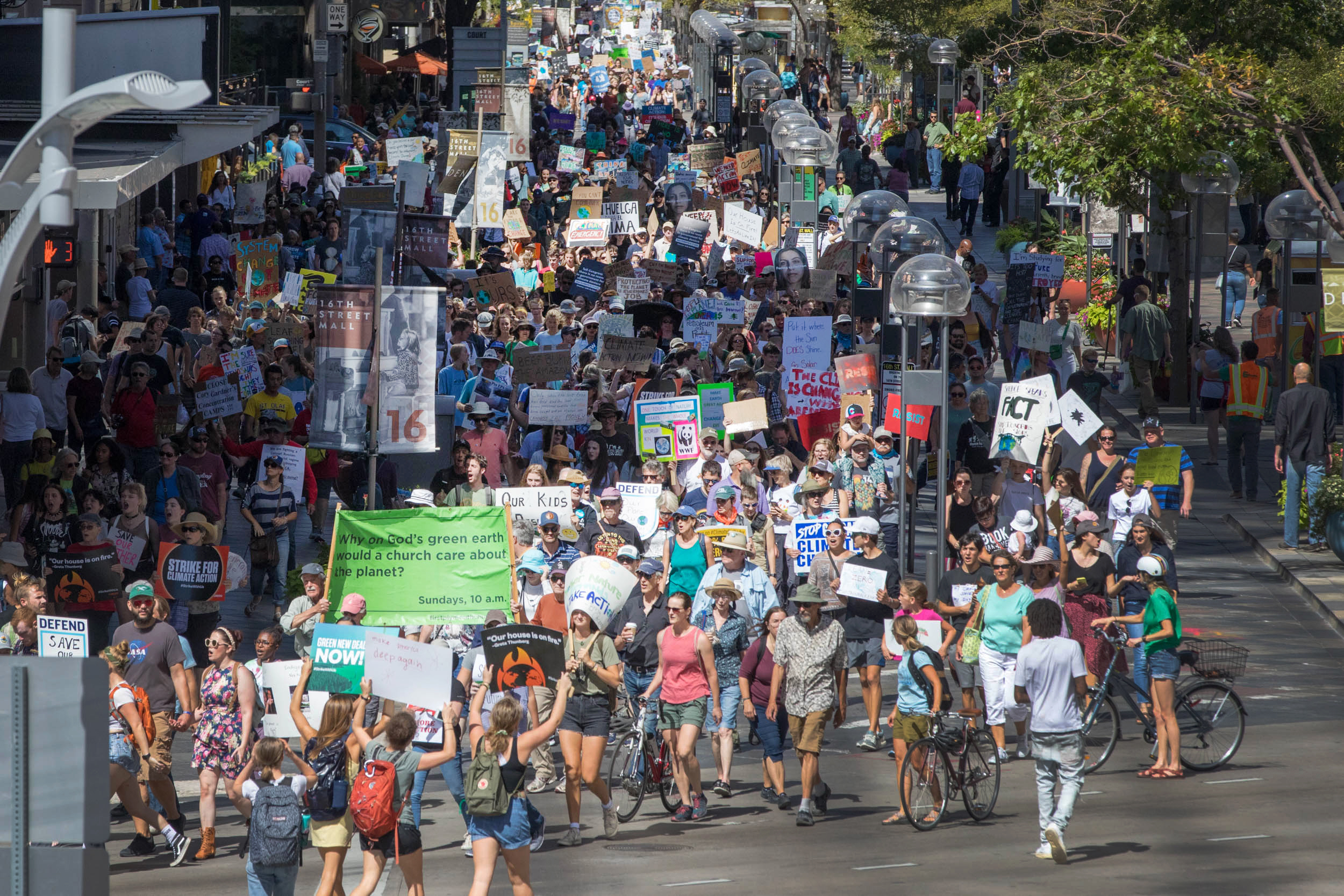 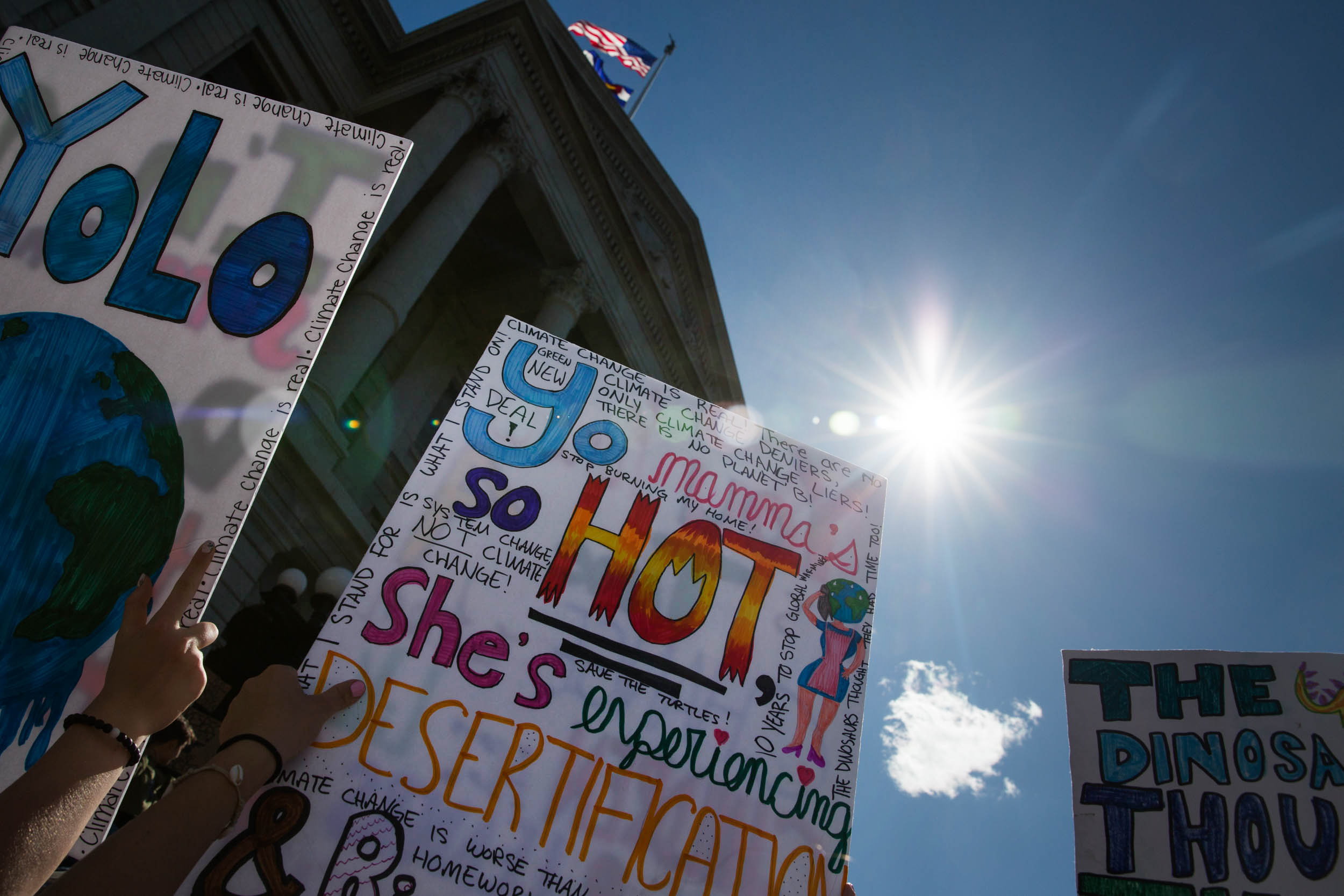 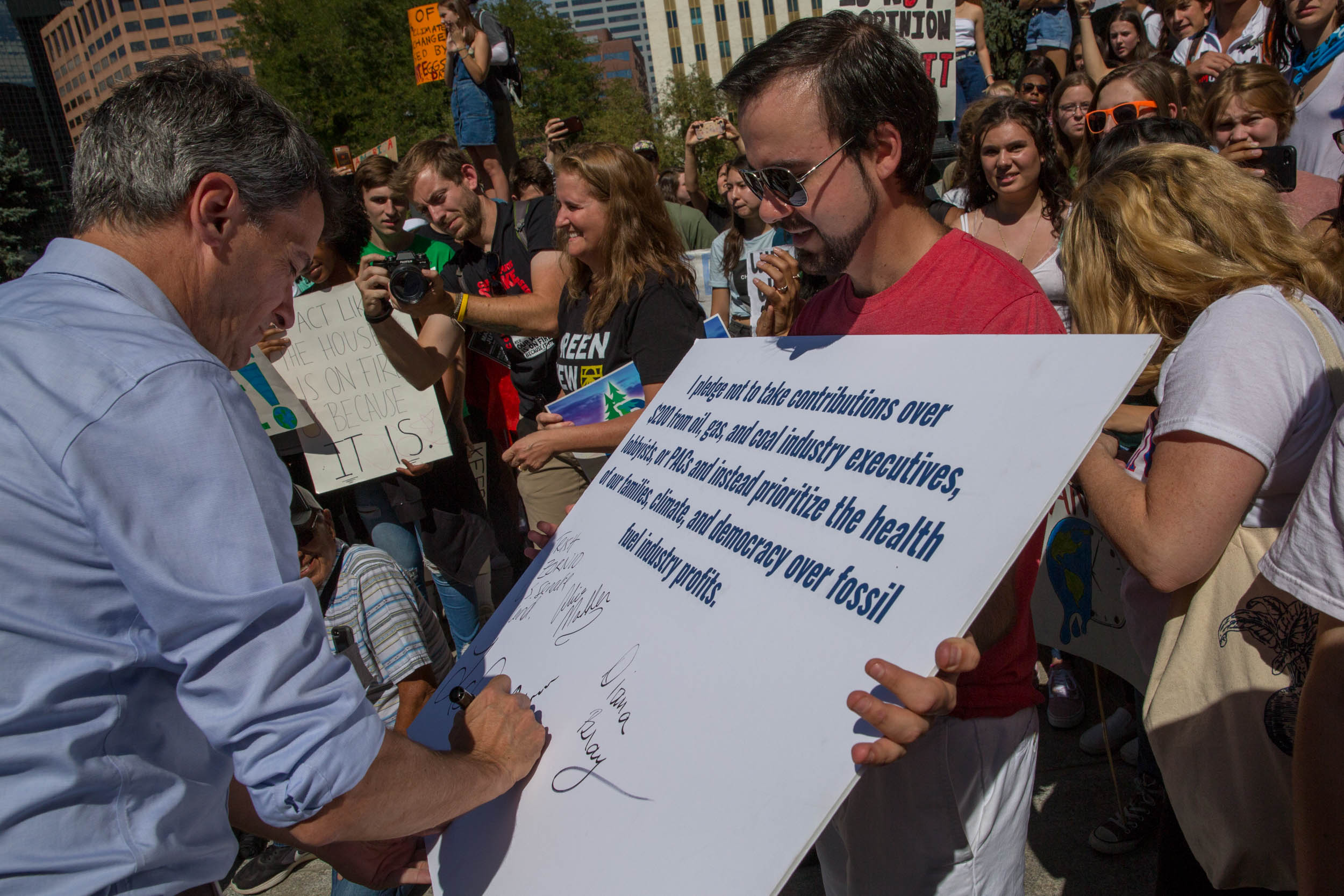 Hart Van Denburg/CPR NewsDemocratic U.S. Senate candidate Andy Romanoff was among those who signed a pledge to limit the kinds of campaign contributions they take. Thousands marched from Denver's Union Station up the 1th Street Mall to the Colorado state Capitol on Friday Sept. 20 2019 in support of an international youth-organized strike aimed at combating climate change. 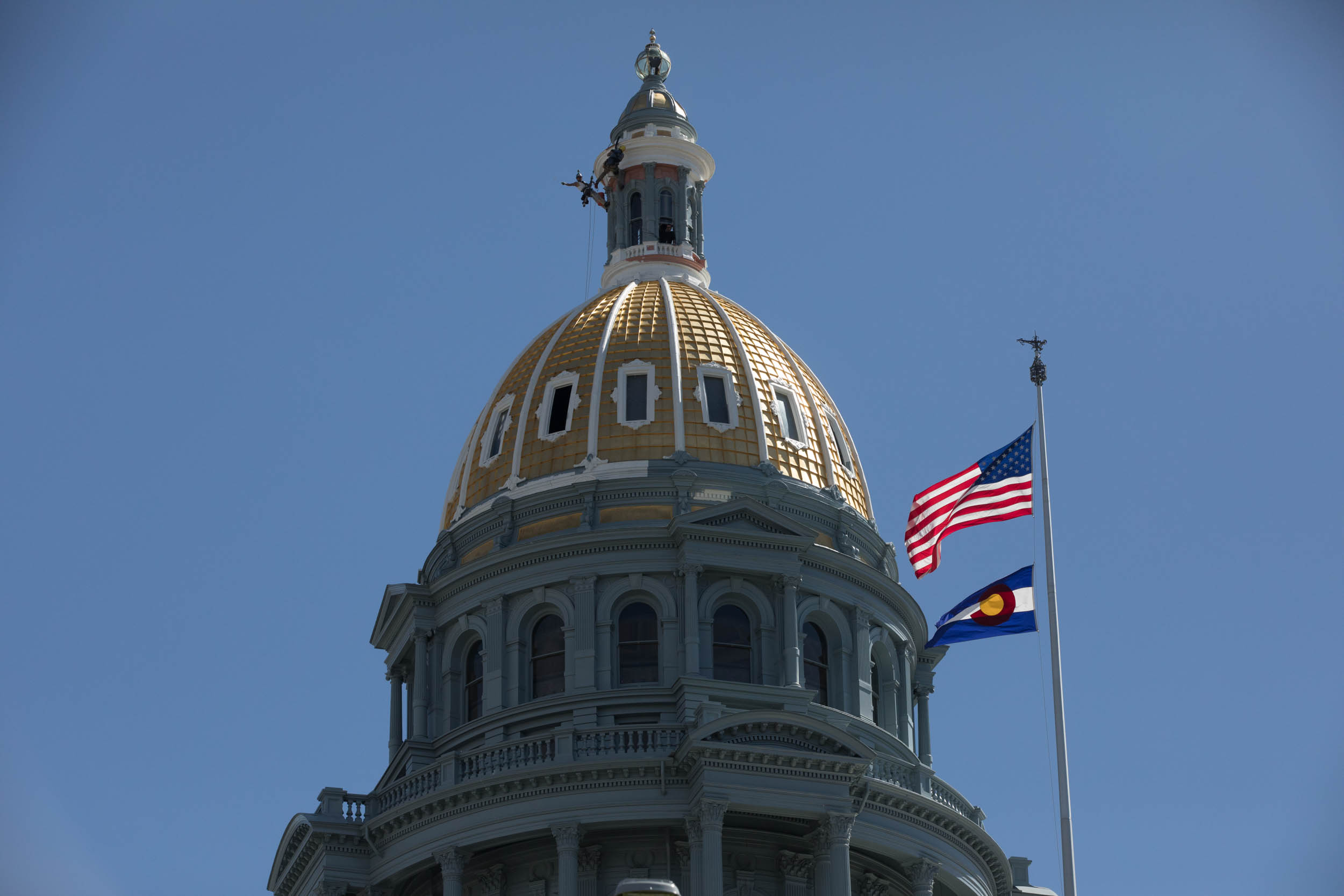 Sebastian Andrews, a student at the Denver School of the Arts, said he couldn’t not join the strikes.

"My biggest fear in life is that I didn't do everything I could,” Andrews said. “I want to be on the side of history that can say, ‘I told you so and I tried.’"

Sebastian Andrews of Denver School of the Arts says he couldn't not be here today.

"My biggest fear in life is that I didn't do everything I could. I want to be in the side of history that can I told you so and in tried." pic.twitter.com/N51PuHO6dz

The Wrights joined the strike as a family. They said they’re trying to get people to understand the issue as a “climate crisis” instead of “climate change.”

The Wrighths came out as a family to today's stikes. All of them said there trying to get people to understand it isn't "climate change." It's a "climate crisis" pic.twitter.com/PYd9fZWGXO

More than 25 other events are being held across the state. In Colorado Springs, Cora Tasker, a 15-year-old sophomore at Palmer High School joined the Climate Strike. Tasker acknowledged that while class and learning is important, “my future is also important.”

“What’s the point of I guess, going to class if I can’t apply that to my future if I don’t have a future?” Tasker said.

She added that this strike is a powerful moment for kids who are worried about their tomorrow.

“I mean, it’s a weird thought of getting older and that maybe I will have kids, and maybe the actions that I choose now and the actions of other people around me that they chose now, that’s affecting my future,” Tasker said.

This is the first Climate Strike Tasker has participated in. Previous actions were held in March of this year. She feels that she’s starting to understand the issue more and “how much it will actually affect me.”

“It’s very easy to think of it on a global scale that, oh, it's someone else's problem. But in the past year it has become more of my problem,” Tasker said. “I hope that our government will see that action needs to be taken faster, and it’s not negotiable anymore.” 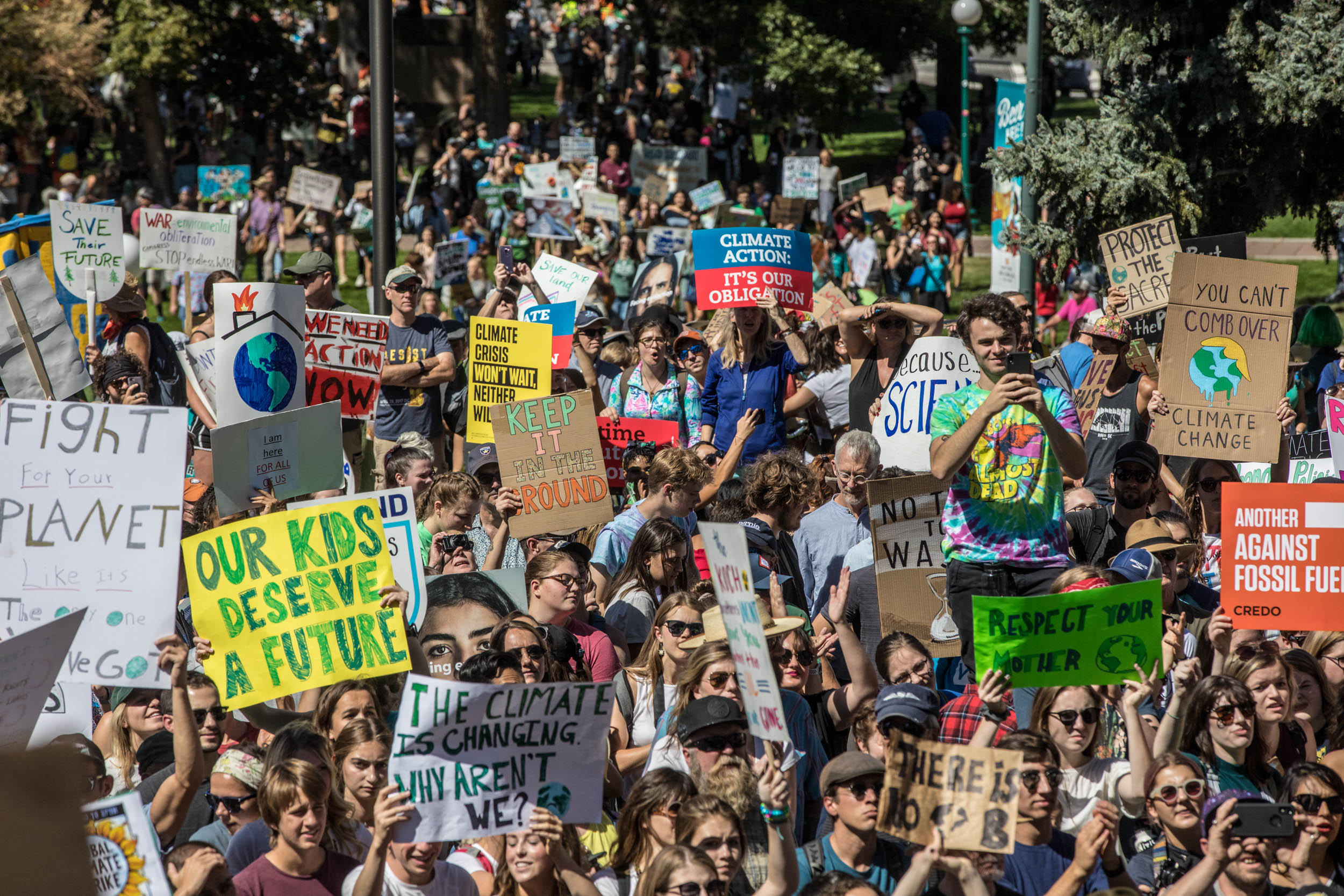 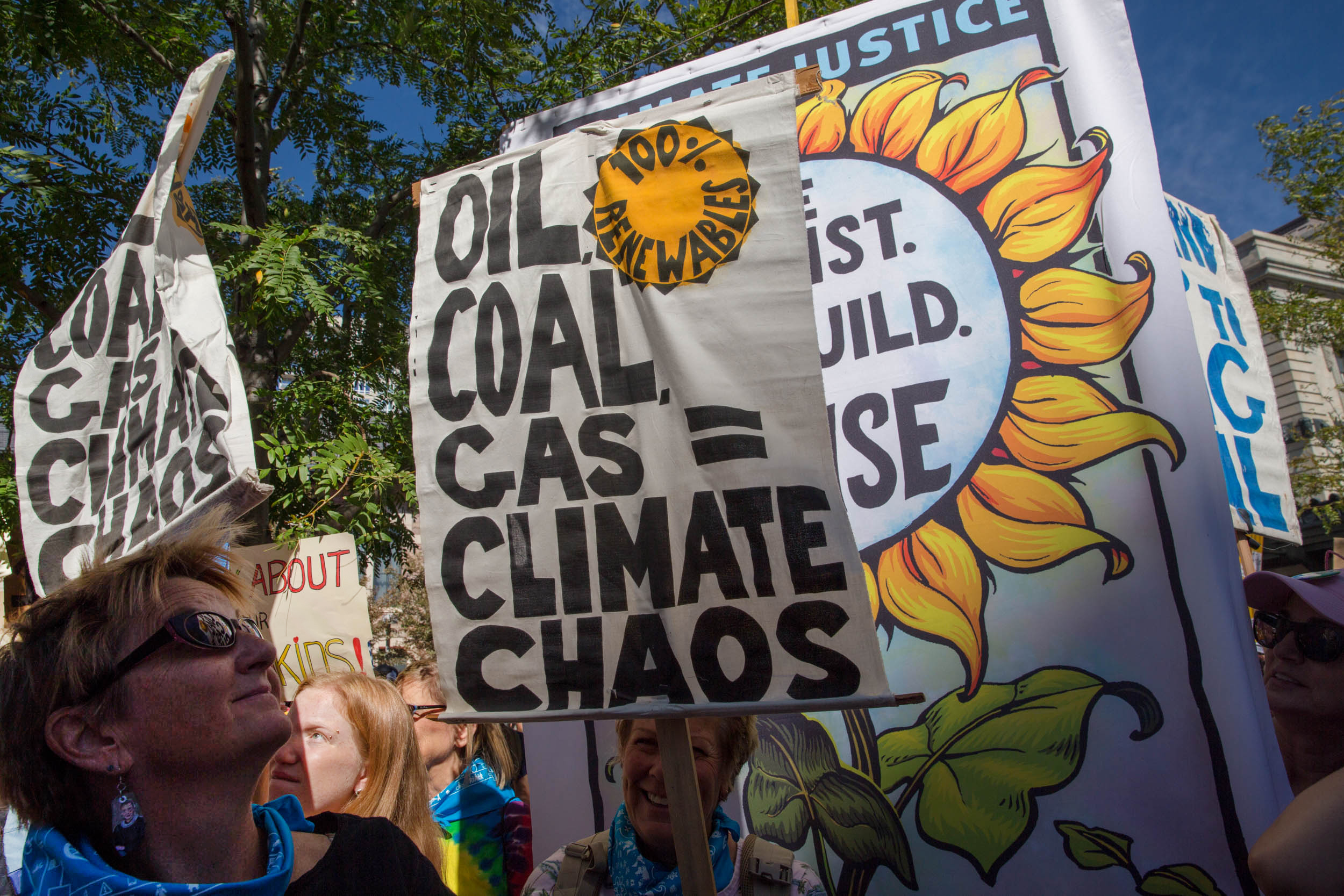 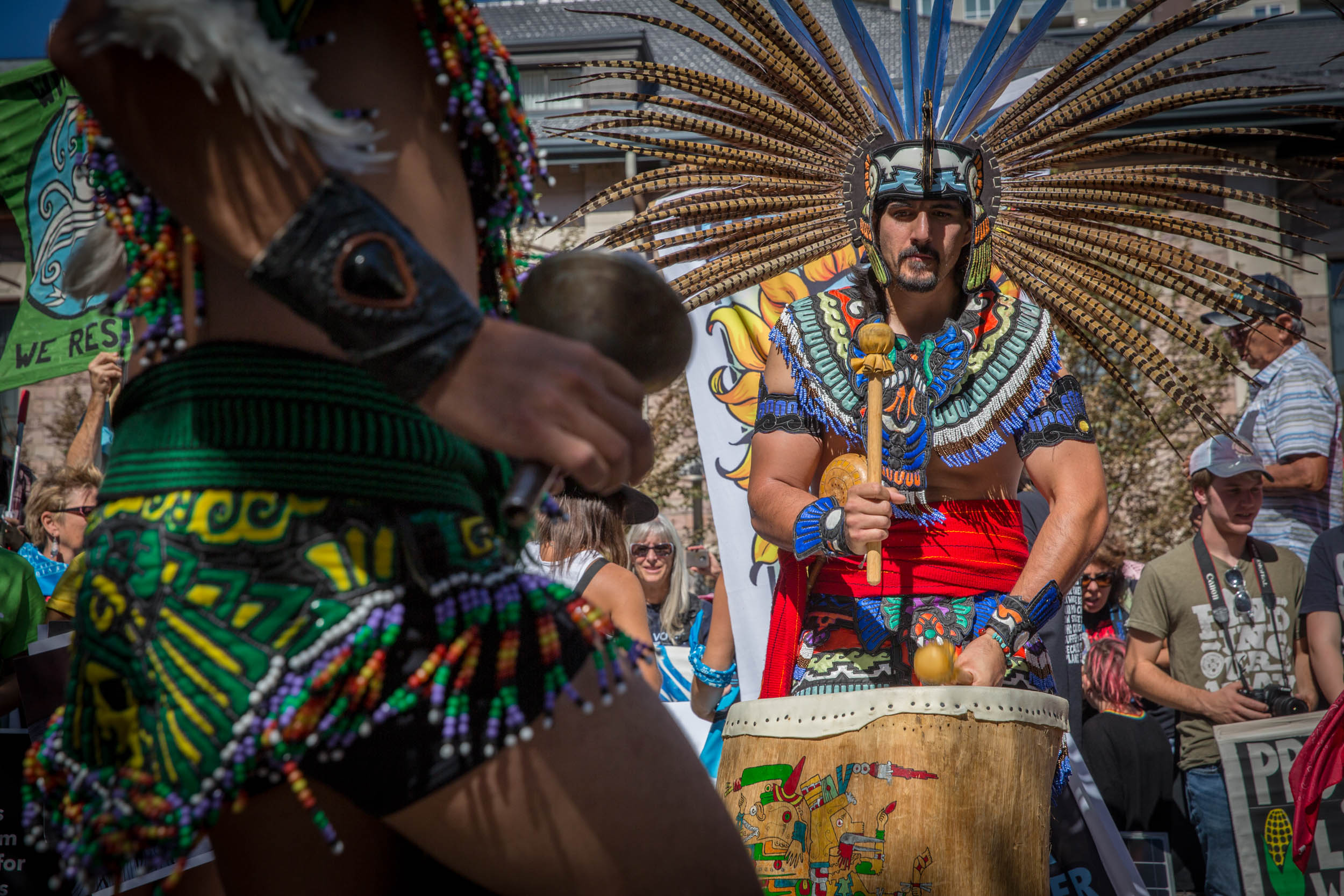 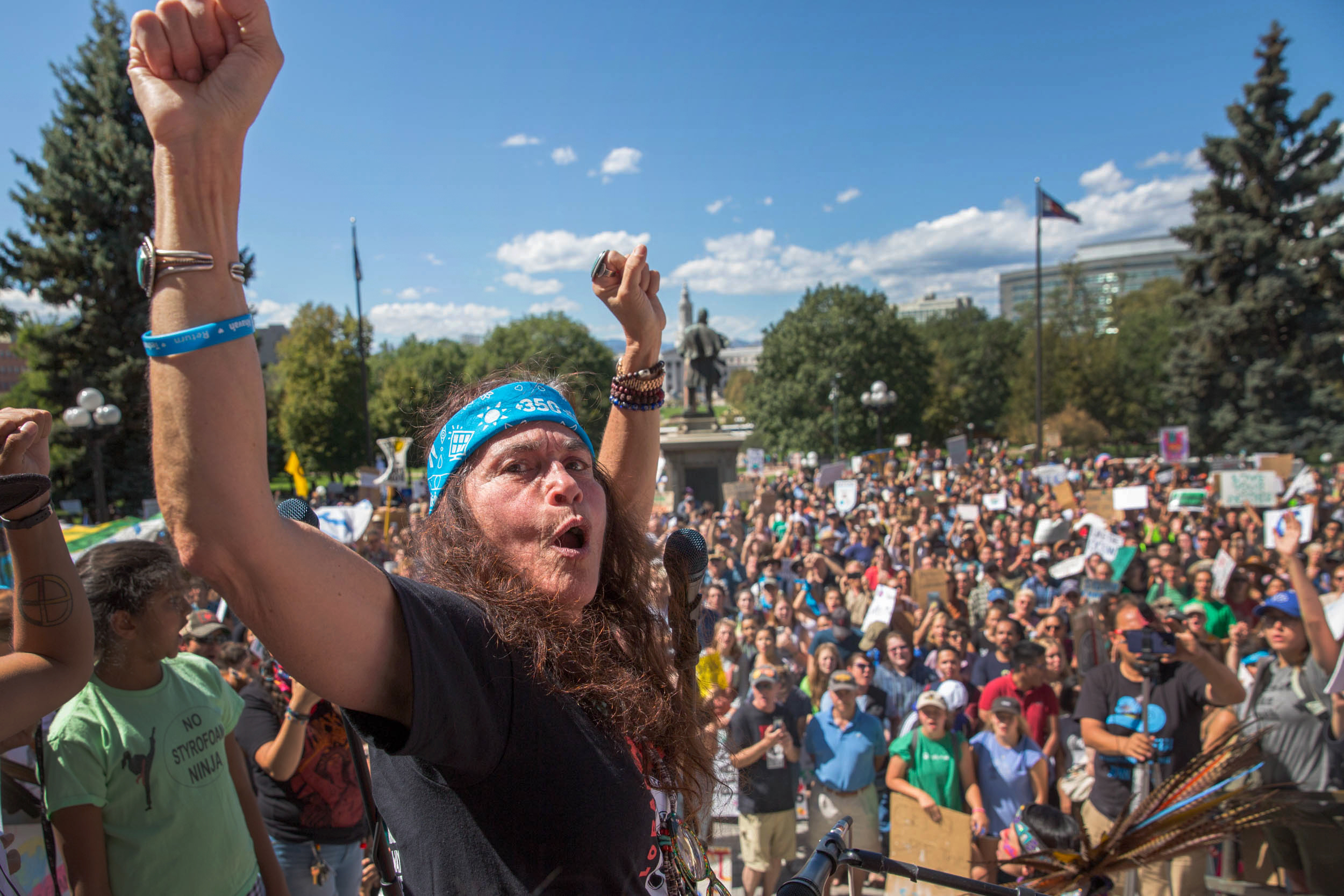 Hart Van Denburg/CPR NewsDemocratic U.S. Senate candidate Andy Romanoff was among those who signed a pledge to limit the kinds of campaign contributions they take. Thousands marched from Denver's Union Station up the 1th Street Mall to the Colorado state Capitol on Friday Sept. 20 2019 in support of an international youth-organized strike aimed at combating climate change.

Henry Stevens is also a sophomore at Palmer High School. The 15-year-old recently joined the school’s Climate Club. He said he joined today’s strike because he sees climate change as a “really huge issue that’s going to affect my generation and all the subsequent ones.”

“If we don’t act now, we might not have a chance to,” Stevens said. “I hope that our political leaders will see that we actually care about this issue, and that they change their policies and change the conversation to save the planet.”

The Climate Club has been focusing on the strike, Stevens said, but their overall goal is to make their voices heard more regularly. He said the silence is “how we got into this mess to begin with.”

“We know what causes climate change and we have a lot of ways that we can stop it. We know  that carbon emissions and greenhouse gases are the main culprit in climate change,” he said. “So all that we need to do to help solve it is just get our voices out there and convince more people that it's an issue.”

RTD reported that multiple light rail lines were experiencing delays of up to 30 minutes because of the demonstrations.

Not all Colorado teens are walking out today. On the Western Slope, 16-year-old Sierra Lloyd said students at Fruita Monument High School feel they don’t have enough support from school staff.

“And there’s not enough students to make like a big thing who are really involved in the community and climate action and environmental protection,” Lloyd said.

Instead, Lloyd and others are protesting after class is out at Lincoln Park in Grand Junction. She wants the demonstration to raise awareness on the issue of climate change, “especially in rural towns like Grand Junction and Fruita.”

“Rural areas are so supported by the oil and gas industry and development, that really regulations sometimes face a lot more resistance here,” Lloyd said. “I don’t know, there just seems to be a lot less awareness of the importance of climate change and how it’s going to affect rural communities uniquely compared to cities.”

“A lot of the time rural youth voices are less focused on than urban youth voices, because we have less access to media and less access to having our voices heard about how living in rural areas we are surrounded by the environment more than anybody, she said.” “And climate change is something that will really uniquely affect rural areas and rural use in the future.”

It’s more difficult to have conversations about climate change on the Western Slope because “people’s families are supported by the oil and gas industry,” Lloyd said, and there are stronger conservative views.

“So it’s kind of hard. We definitely need to strike a balance between regulation and protecting the environment, but also making sure that people’s families are supported,” she said.

These strikes are driven mostly by students, but Lloyd hopes people show up “from all ages and across the whole community.”