Editor's note: This story was published after a Denver snowstorm in October of 2019. For the latest on the current weather, visit cpr.org

Cruz Ortega, Martin Lomeli and their group of friends from John F. Kennedy High School in southwest Denver had just stepped beyond a small grove of pine trees when they saw it: a jump, at the bottom of Denver’s best-known sledding hill at Ruby Hill Park.

“Who’s going first?” Lomeli, 17, shouted to his friends above as he stood next to the 3-foot bump of packed snow.

That the snow was there at all was unusual, considering it’s still October. The two-day snowstorm, which will stretch into a third day as it blows into Wednesday, has dumped more than a foot of snow across the Front Range. It’s made commuting a mess, for those unlucky enough to be old enough to have a full-time job. 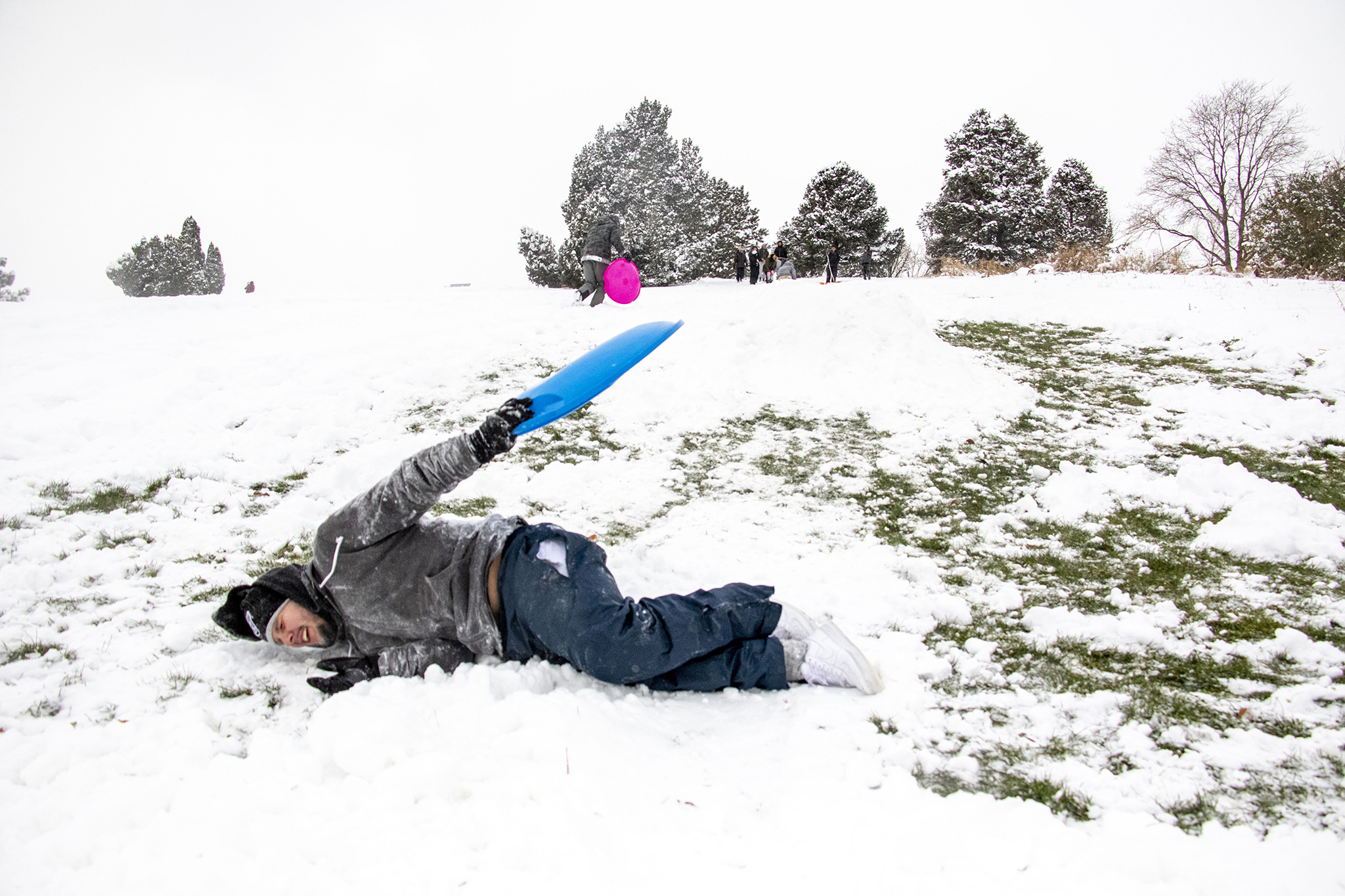 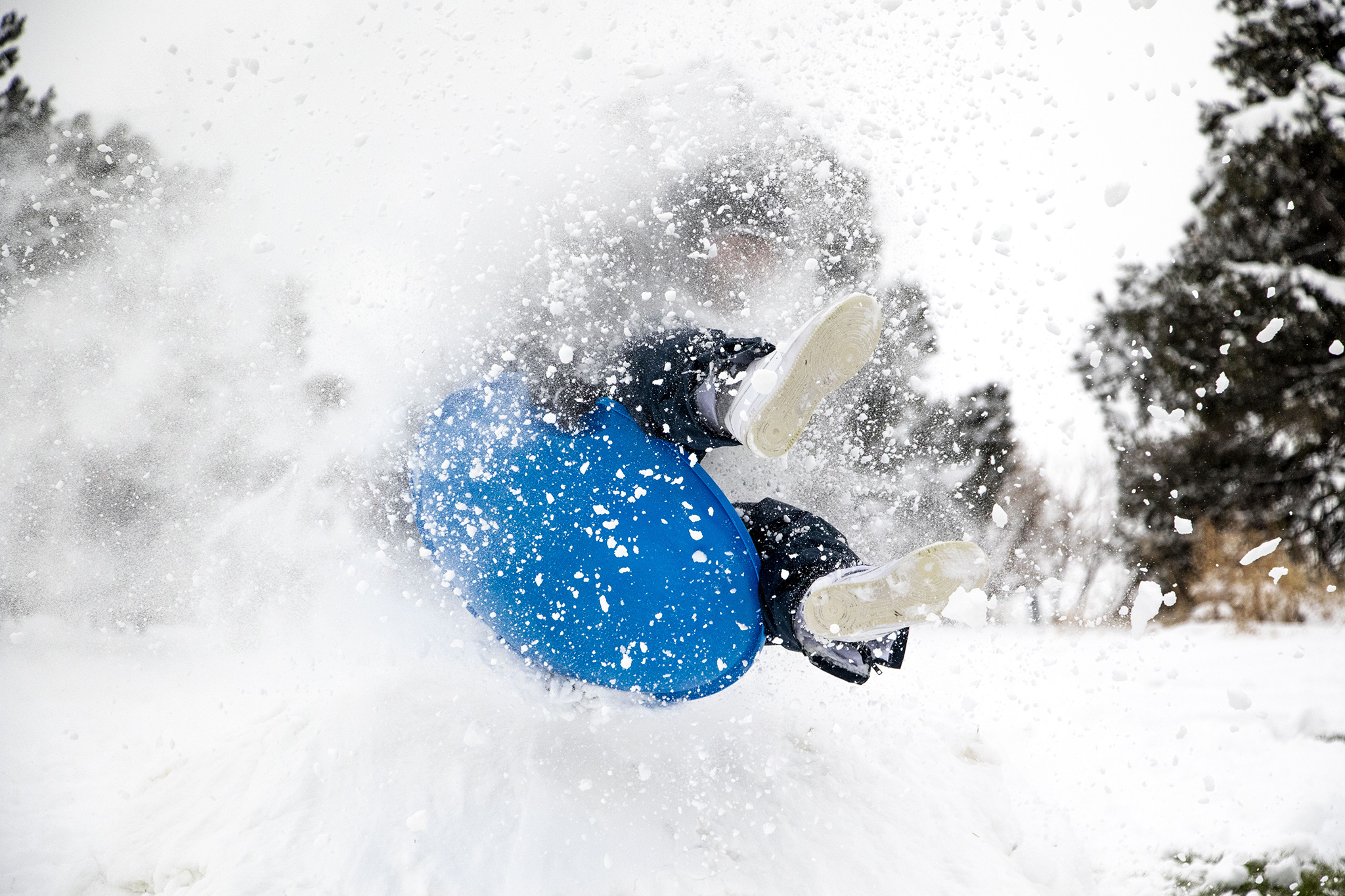 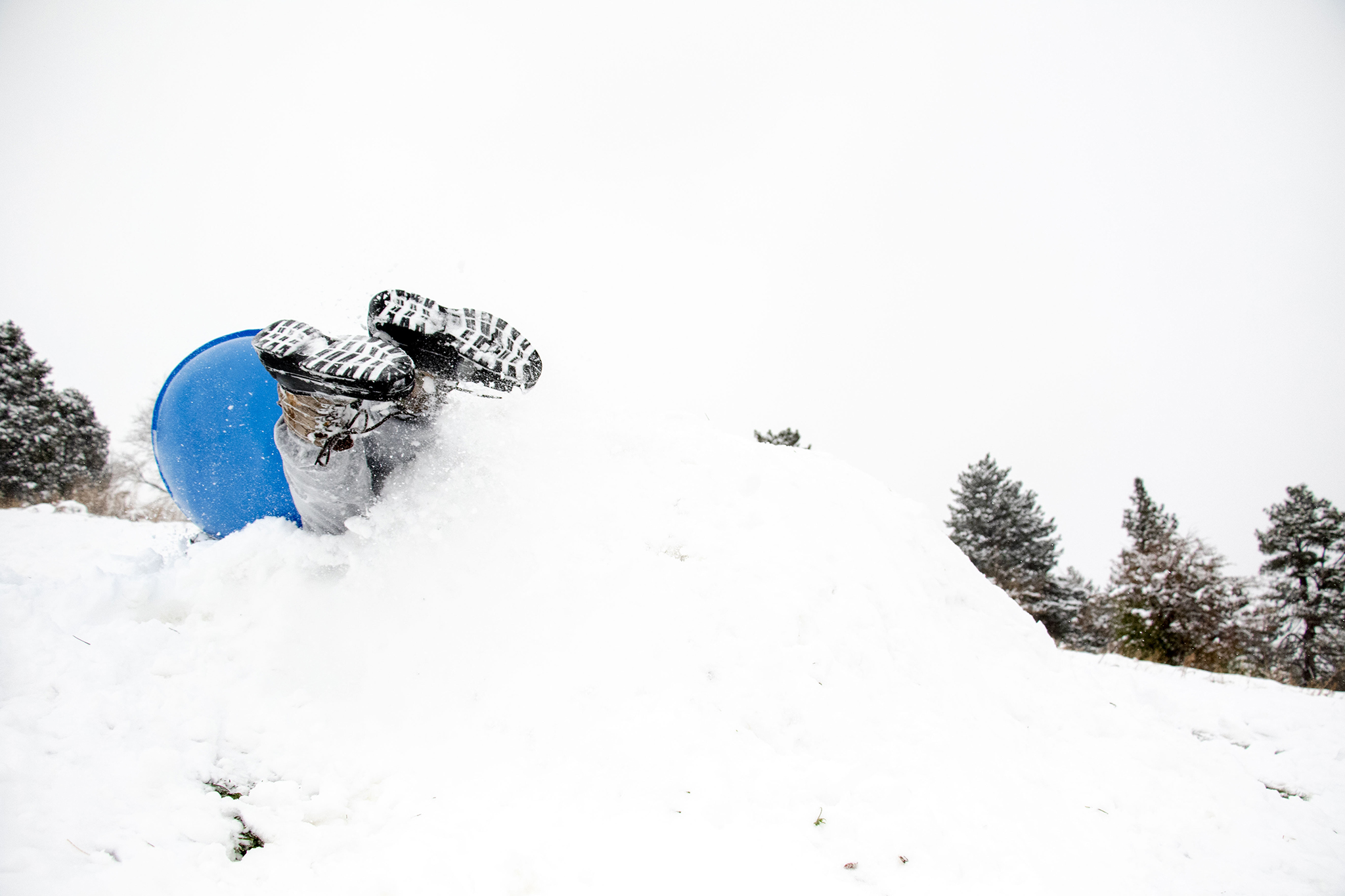 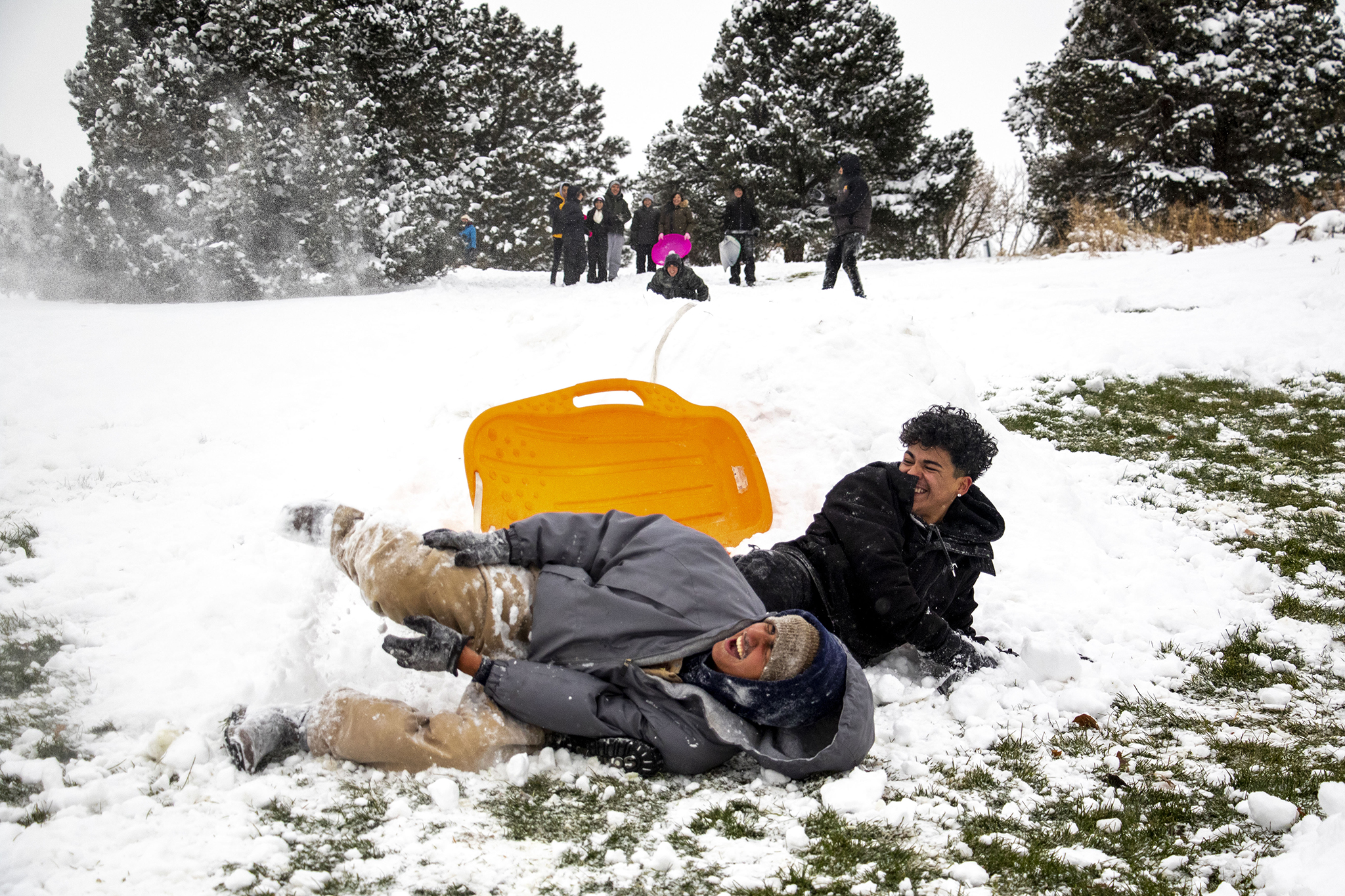 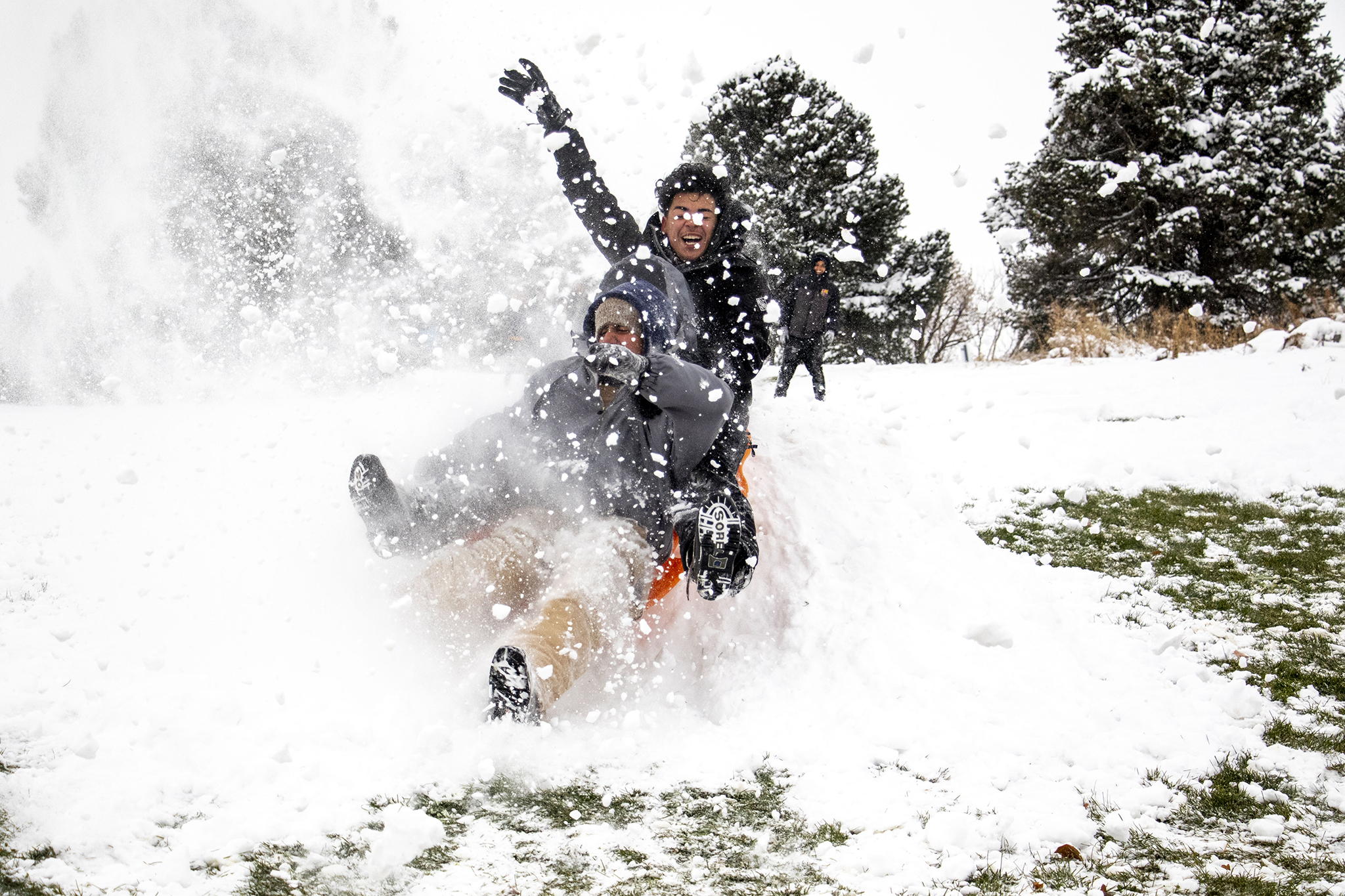 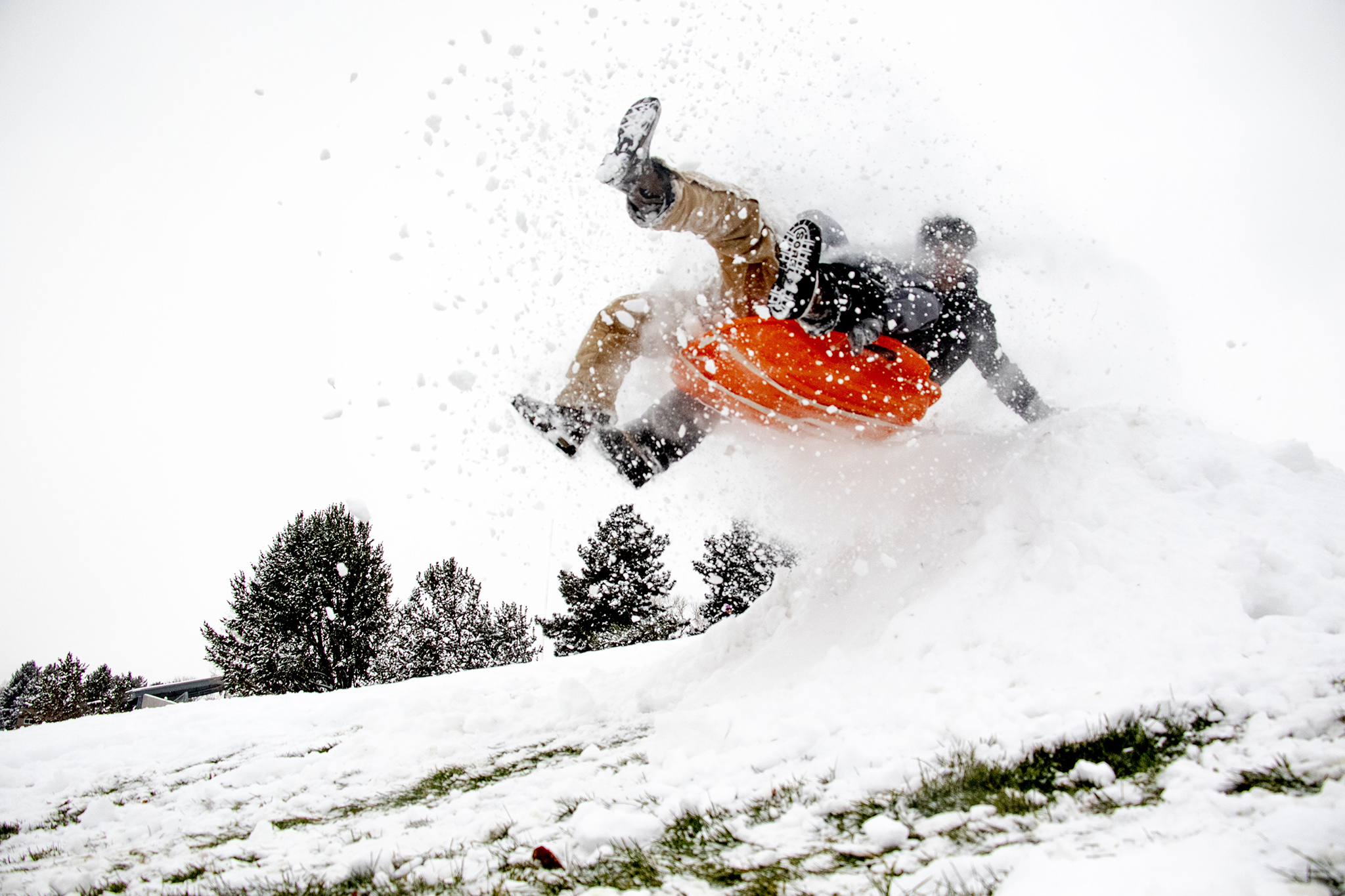 Kevin J. Beaty/DenveriteCruz Ortega and Aryel Ramos fly over a jump at Ruby Hill Park on small sled on a snow day, Oct. 29, 2019.

But such a fate is still at least seven months away from these high schoolers. They found themselves with an afternoon free after school let out at noon, and after-school sports practices were canceled.

"I haven't been sledding in over 10 years. I spend most of my time in a wrestling room, practicing, working out,” Ortega said.

After watching a movie together, someone had the idea to head to Ruby Hill Park. Lomeli, who sported an Oakland Raiders knit hat, is originally from California, and wasn’t wild about spending time out in the 15-degree cold.

"I don't like this weather, but I'm out here with my friends, so it's a little better,” he said.

After they found the jump, Ortega set about leveling the crunchy snow above it. Patches of green grass were still visible in places, which proved to be surprisingly slick.

"We've just gotta flatten this out and someone's getting 10 feet of air, bro,” Ortega said.

As Ortega slashed away with a shovel, Lomeli stood waiting below.

"If they're going fast enough, the maximum height will be right about here," he said, gesturing above his head. "I don't know, I didn't take trigonometry, man."

On the first try, the sled veered too far to the left. The second hit the jump, but too slowly to make it over the top.

The third attempt was dead on. Two friends barreled down and hit the jump with enough speed to get, while not the full 10 feet promised earlier, enough air to land with a satisfying “wump.”

“Damn, that was fun!” someone shouted as they untangled limbs, and ran back up the hill.

Wanna Go Sledding Too? Here's Where To Go In Denver, Colorado Springs And Elsewhere In Colorado On A Snow Day