Photo Courtesy Joey Mathews The box that will be sent to the stratosphere with the Pueblo Chili seeds. 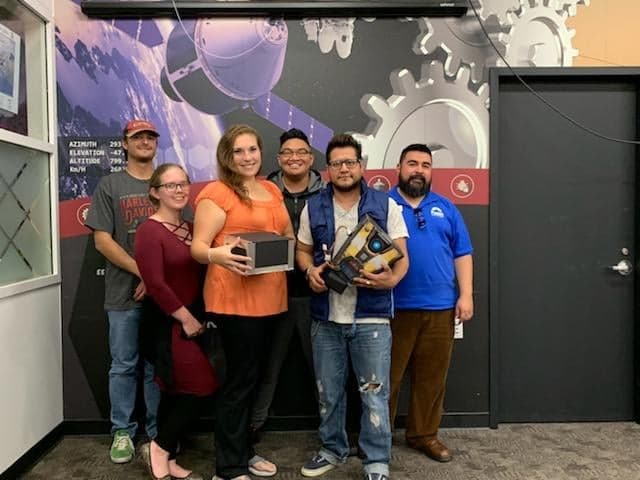 What happens to Pueblo chile seeds when they go to space? A group of students at Pueblo Community College will soon find out.

The project is part of the school’s STEM Career and Tech program and is one of 21 in the state chosen for the NASA-funded Colorado Space Grant Consortium. For the past few years, students have sent balloon satellites up about 100,000 feet into the stratosphere.

Joey Mathews, director of the PCC program, said they then study various outcomes once the balloon returns.

“Along with the Pueblo chile seeds that are being sent up, the students are also sending saliva samples to look at any DNA changes and they’re sending up yeast to look at CO2 changes,” Matthews said.

The launch is scheduled for November 9th.

Once the seeds return to Earth, Mathew’s students plan to study germination rates compared to seeds that remained on the ground.

Louis Santos is a first-year student at PCC. He says the experiment may lend more than just data about the Pueblo chile.

“You know Pueblo chile and the New Mexico chile's have a nice rivalry?” he says. “If you’ve heard of street cred — I think we’re going to be getting some space cred.”

The chile seeds come from Pueblo’s DiTomaso Farms. The students also consulted DiTomaso about ideal growing conditions so they can cultivate the “space chiles” in a similar environment. They need a greenhouse though. Right now, the school has enough space to get the celestial extraterrestrial peppers started, but a larger, more-controlled environment is needed.

Matthews attributes the Colorado Space Grant Consortium with helping students secure jobs before they graduate. According to the Albuquerque Journal earlier this year, a New Mexico style chile is set to head to the International Space Station for testing in March.