Thousands of people waited for President Donald Trump in the finger-numbing cold outside the Broadmoor World Arena on Thursday morning. The president wasn’t scheduled to arrive for another nine hours, but the line had been building since the night before.

Visitors from as far as Oklahoma and Nebraska bundled themselves in Trump flags, Trump blankets, Trump beanies and Trump cowboy hats, all sold by a traveling corps of festival-style merchants.

“It’s cold, so I was expecting a little less. It’s surprising, the crowd we’ve got,” said Nancy Pemberton, 27, a vendor from Nebraska who’s attended 17 Trump rallies.

In interviews, voters described a rare opportunity to see the man they believed was disrupting an entrenched political system.

“I knew it would be really packed because we have a lot of Trump fans here in Colorado Springs. This is my first time, and I wasn’t going to miss it,” said Katie Ghist, 26, who arrived at the rally around 7:30 a.m.

Trump’s personality tended to be the first attribute that his supporters highlighted.

“He’s not a politician, and he speaks his mind, and he’s not afraid to tell people exactly what’s happening,” said John Milanesi, a 20-year-old college student in Colorado Springs who wore an American flag bandana and a campaign flag as a cape.

Voters named their priorities as immigration or the economy.

“He really just cares about America. Cares about free entrepreneurship. Cares about the people,” said Ghist, who works with the Amway multi-level marketing company.

Jason, a 27-year-old retail employee from Colorado Springs who declined to give his last name, said much the same.

“We’re going to work every day. I don’t want to be giving my money away to other people,” he said. Jason said he did not think that he received any benefits from the government.

Milanesi’s top issue was immigration, he said, claiming that the gang MS-13 was “running rampant” in his native Long Island.

Also scheduled to speak was Republican Sen. Cory Gardner, who faces a challenging re-election battle. Gardner cut a much flatter profile than Trump among the early-morning crowd; voters knew his name and party, but few could say much more. 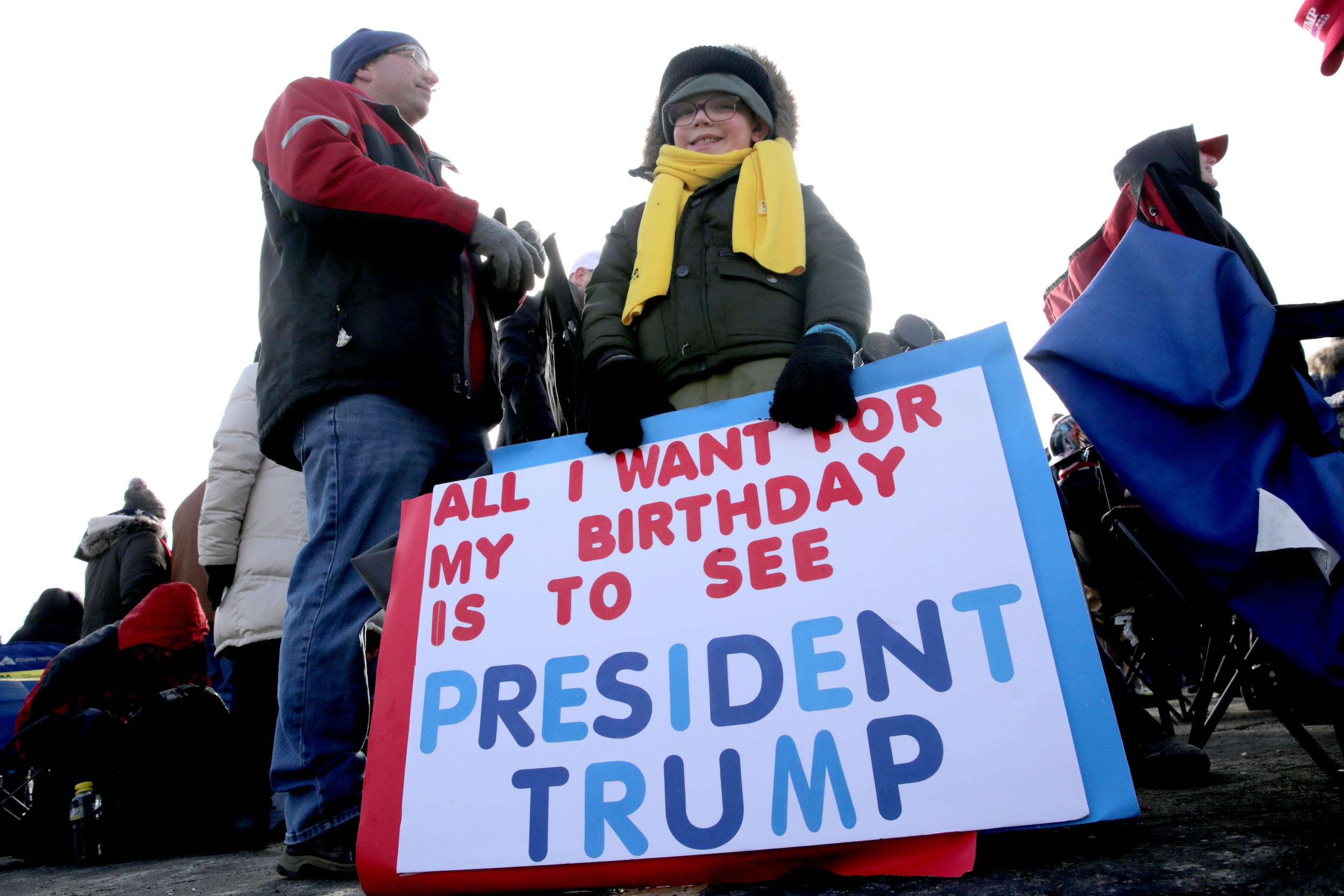 Hart Van Denburg/CPR NewsPresident Donald Trump rallied supporters Thursday Feb. 20, 2020, at the Broadmoor World Arena in Colorado Springs. Jeff Laib of Colorado Springs, at left, who took a day off from his job with FedEx, was there "for a civics lesson" with his sons Carson, 9, holding the sign. Not pictured, his sons Max, 8, and Jackson, 11. 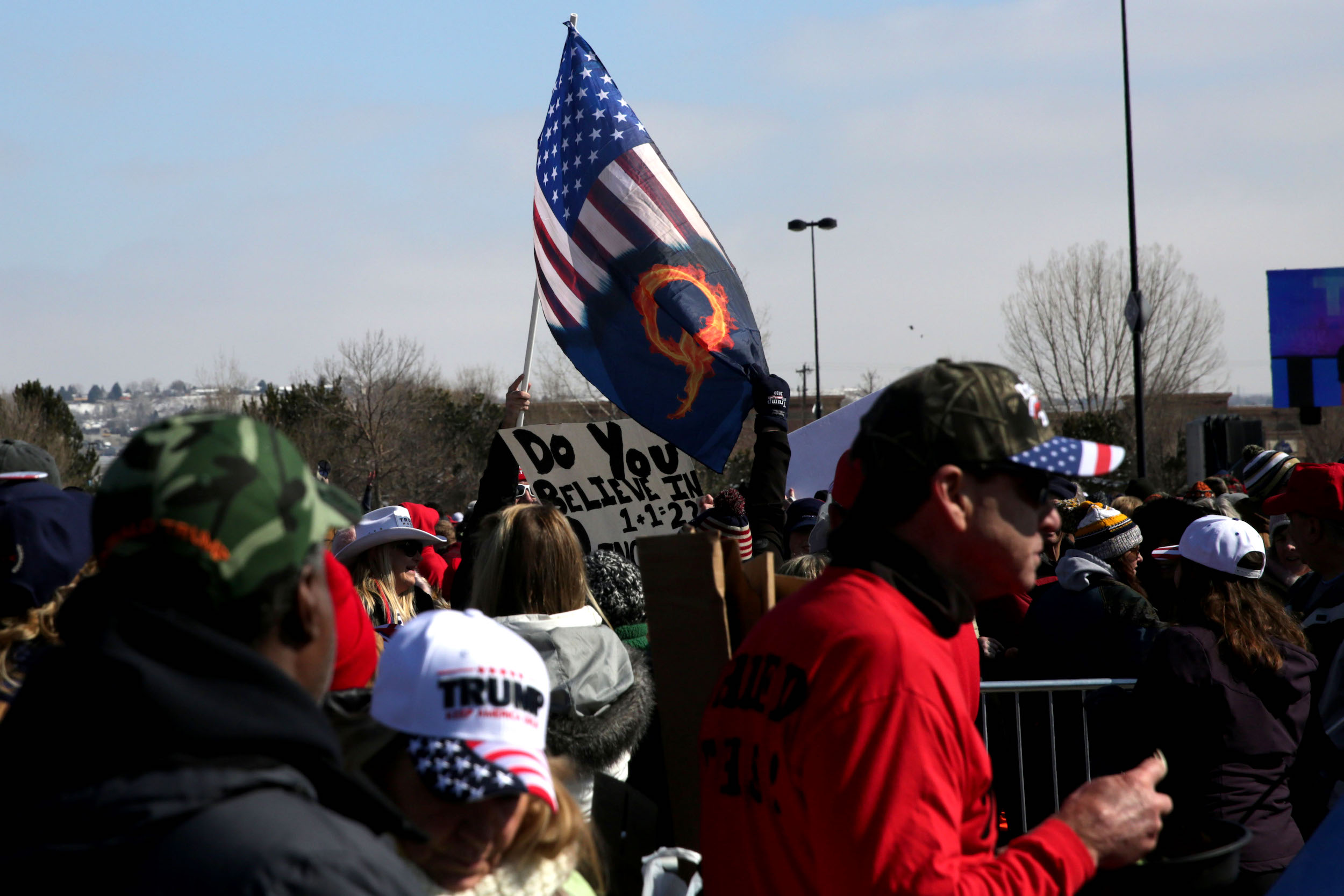 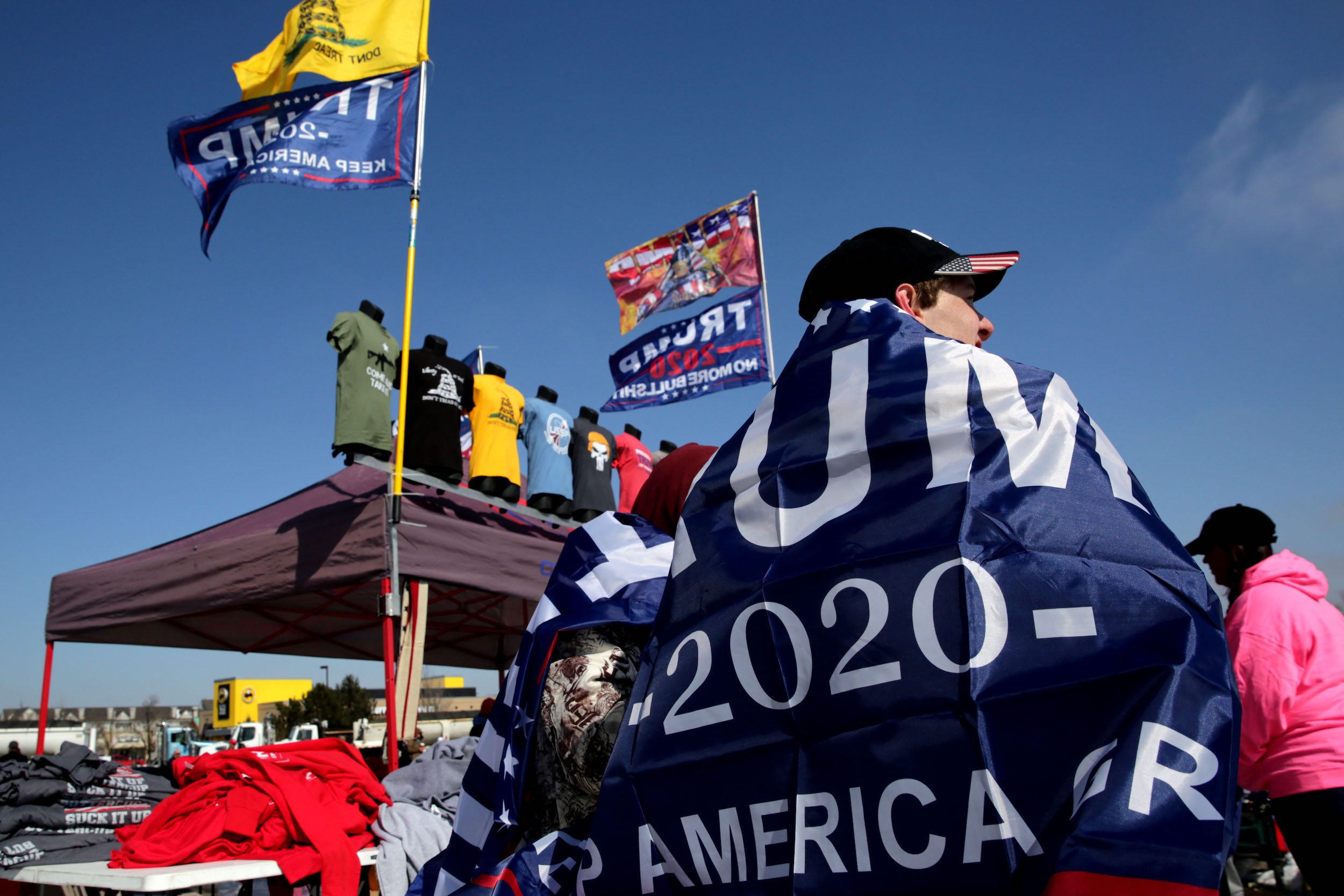 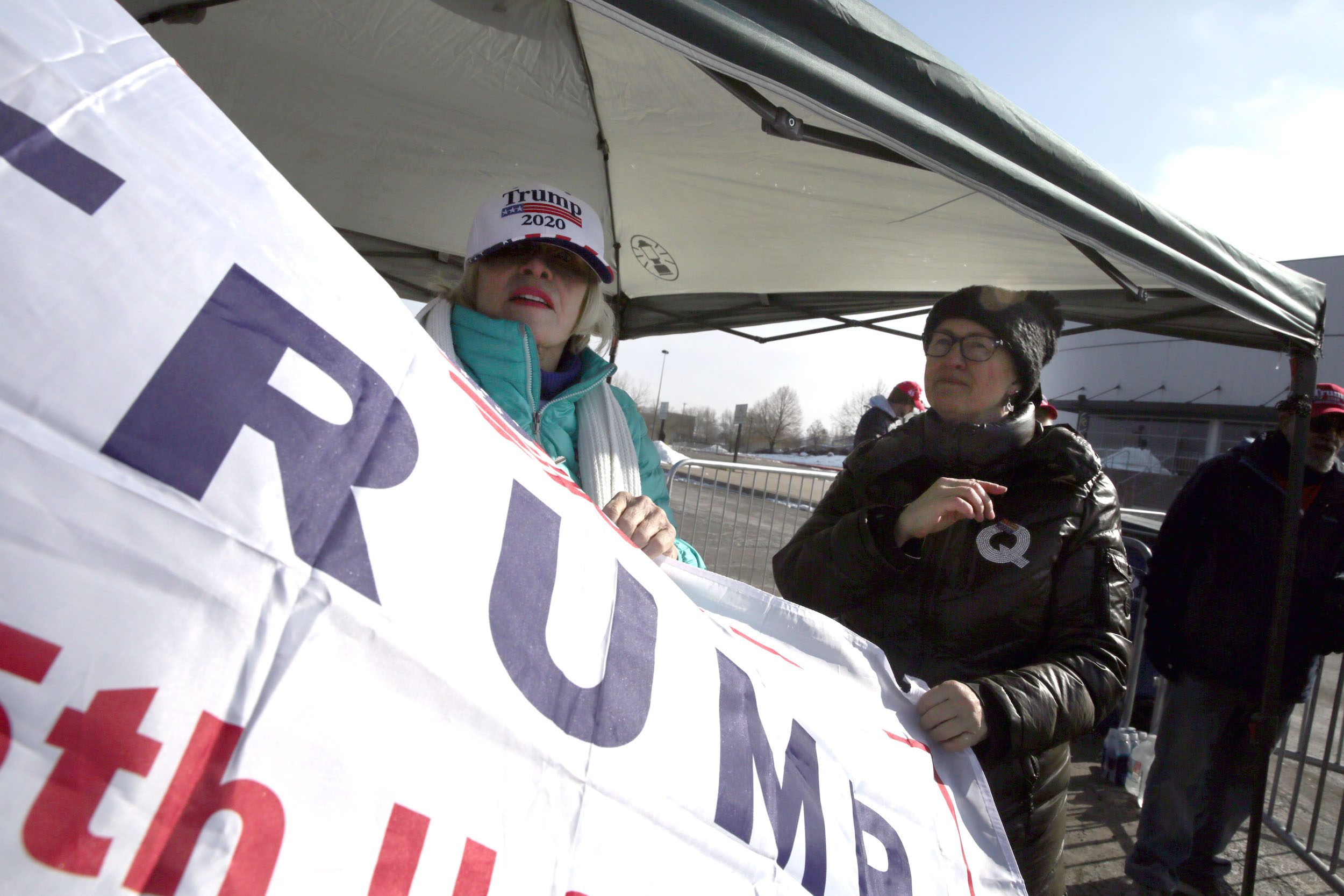 Hart Van Denburg/CPR NewsPresident Donald Trump rallied supporters Thursday Feb. 20, 2020, at the Broadmoor World Arena in Colorado Springs. Kim Desch of Longmont, right, and her mother Rita Bale, who is from Casper, Wyoming, stood at the very front of the line to get in. They got in place at 5 a.m. yesterday, and camped out overnight. 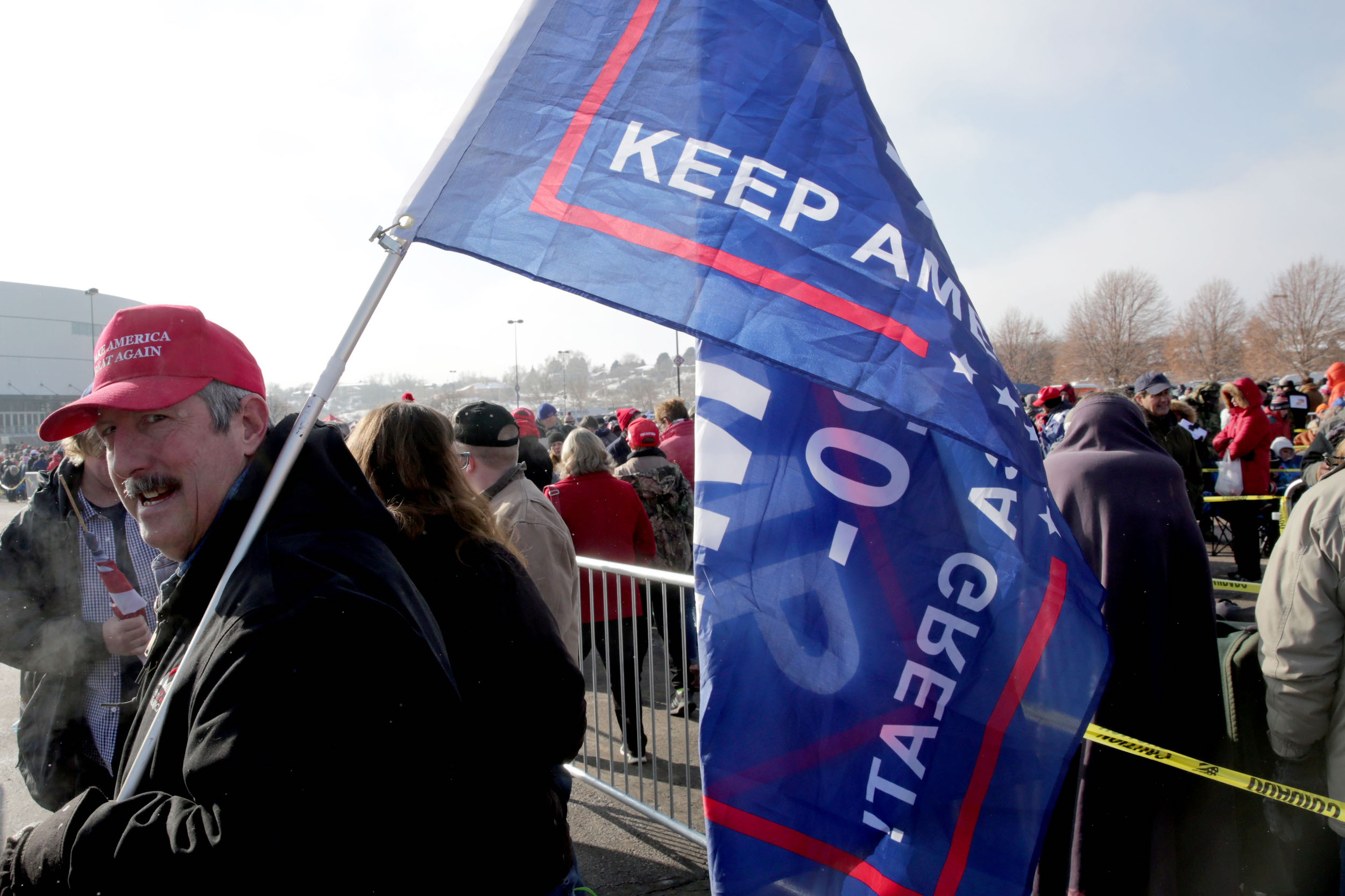 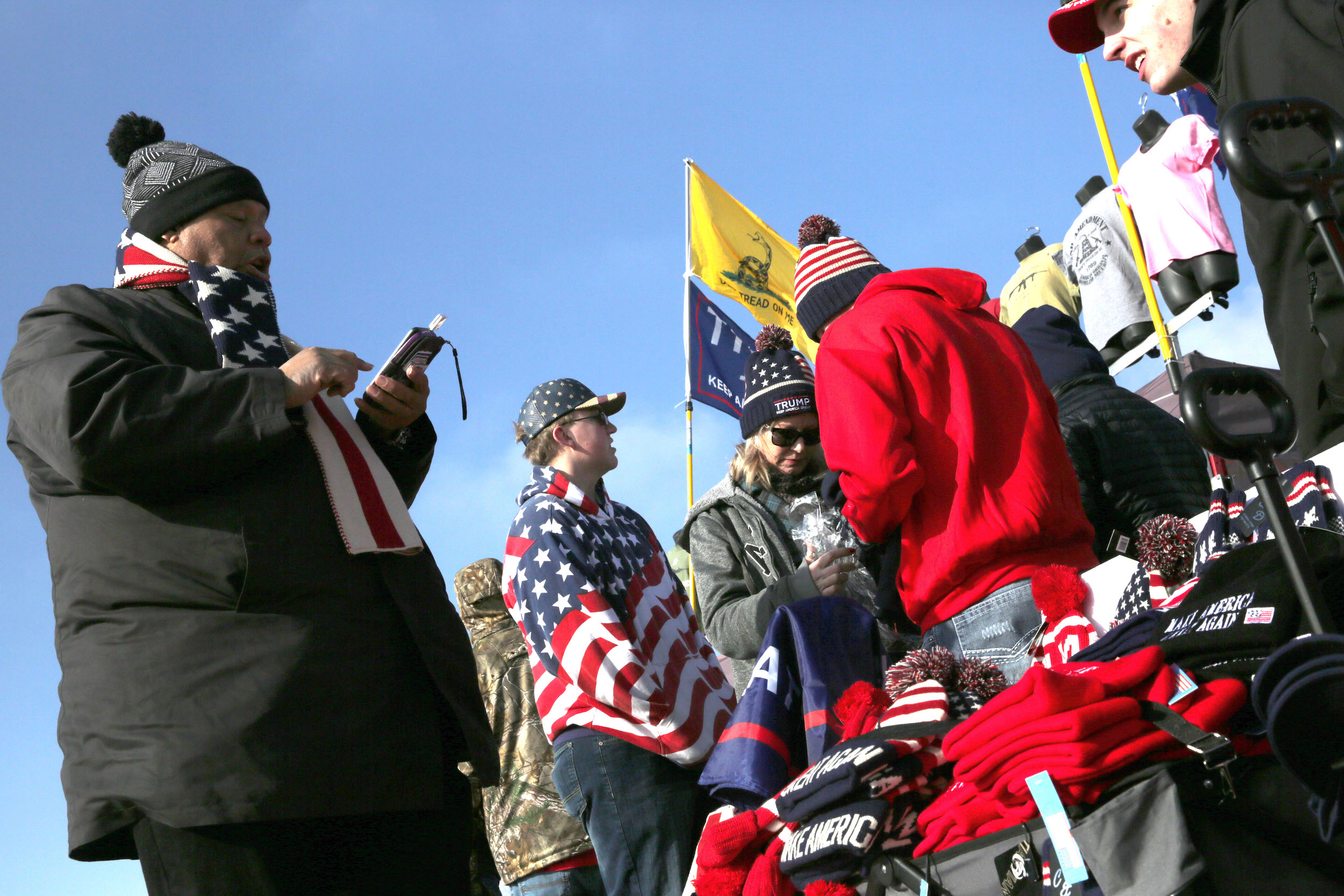 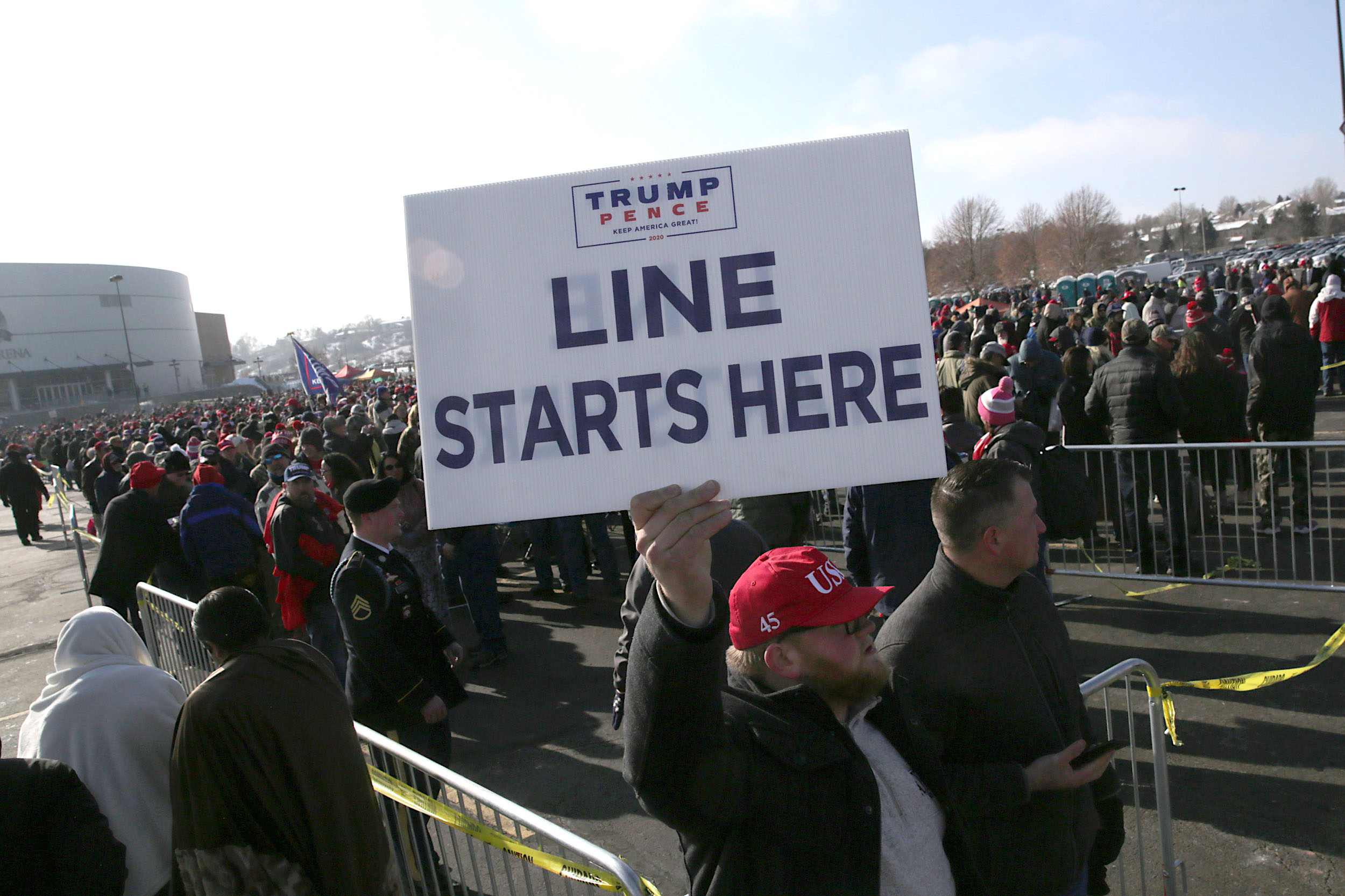 Hart Van Denburg/CPR NewsMaddox Friesen, 17, of Denver, is an intern with the Colorado Republican Party. He directs people to the back of the line ahead of President Donald Trump’s rally Thursday Feb. 20, 2020, at the Broadmoor World Arena in Colorado Springs. 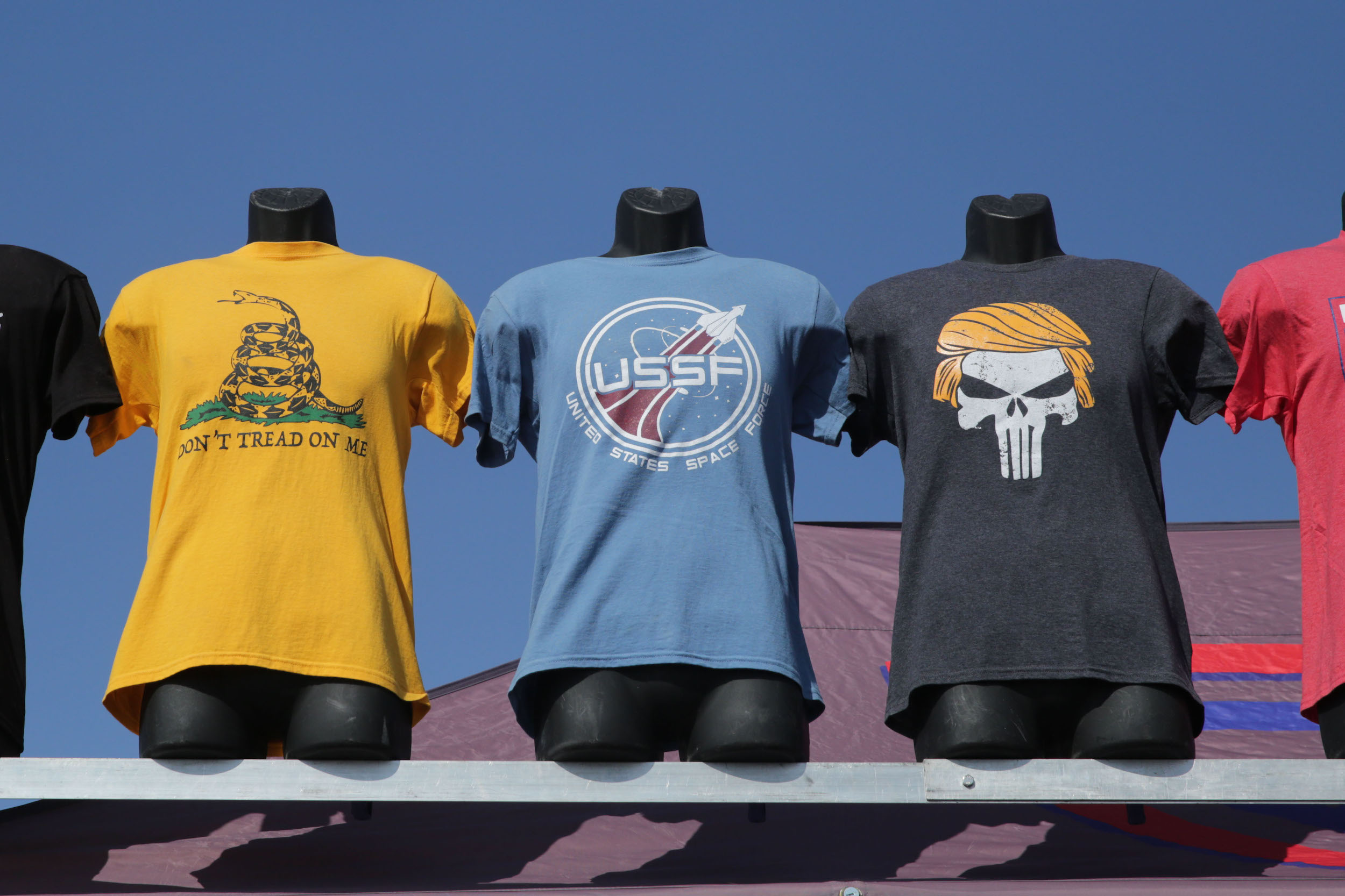 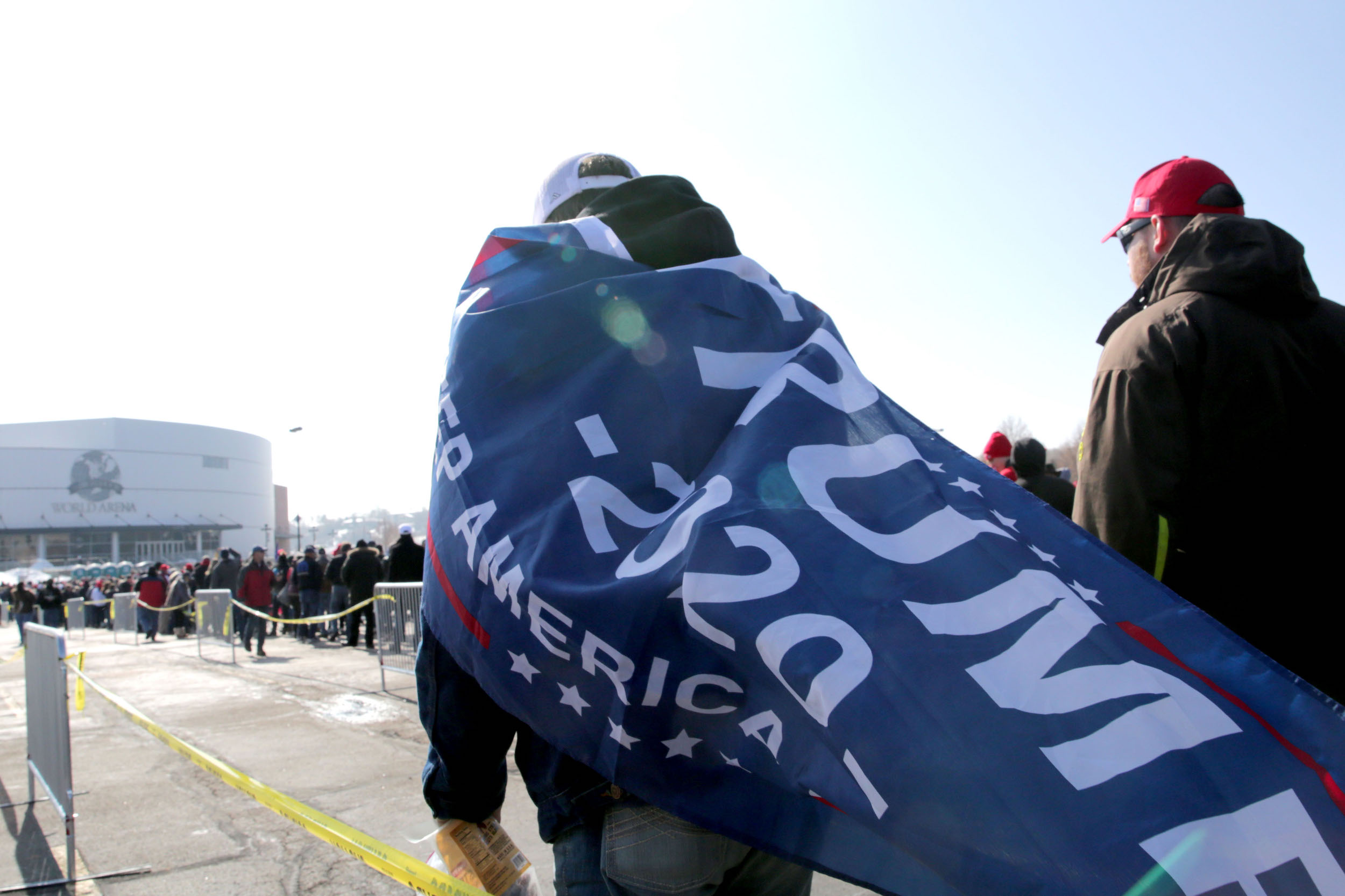 “I think he’s tried to do the best he could to represent as a senator for the state,” said Andy Colby, 50, a former police officer who now works for the Department of Defense. He said the most important thing was for Republicans to secure Congress.

Gardner publicly criticized Trump in 2016, saying he wouldn’t vote for him after some of Trump’s derogatory comments about women surfaced. But Gardner has closely tied himself to the president since, and voters seemed happy to overlook their past differences.

“I know that a lot of people back in 2016 were very wary about Trump. But I also know that since Trump is here now, more people have jumped on,” Ghist said.

Jason didn’t recognize Gardner’s name. He said he’d have to do a little homework on the senator.

“Obviously, I lean a little toward him, but I’ll still need to do the research,” he said.

Robert Mirabella, a 52-year-old Navy veteran who works in health care and lives in Littleton, said of Gardner: "I think most of us who are conservatives wish that he would back the president a little more, be a little more in line with conservative values, and I think that a lot of people would say he's better than a Democrat. That's probably the most positive thing you'll hear."

“I’m not too familiar with him and his policies. Because everything’s been about this presidential stuff and this impeachment,” said Polk, 54. She voted third-party in 2016, but she's leaning toward Trump this time.

The Morning Consult's favorability polls showed late in 2019 that Gardner was one of the "most unpopular" senators in the country. He had 37 percent approval in the state, while Trump had 39 percent approval here.

However, Trump's unfavorable ratings were much higher — meaning that voters may have stronger feelings about the president than about Gardner in both directions.

Hours later, Gardner joined Trump on stage, where they claimed victory on everything from the economy to the relocation of the Bureau of Land Management's headquarters.

Starlene Kuhns, a 59-year-old Southwest flight attendant, said she didn't mind that the senator was skeptical of Trump in 2016.

As the venue emptied, Ryan Zweigart said that he was almost ready to vote for Gardner.

"I guess I just walked away knowing that he's going to be a supporter of Trump, no matter what," said Zweigart, 36, a UPS delivery driver from Parker. But he still wanted to hear more from the candidate.

Here’s Kim and Gryffin. She was a third party voter in 2016, leaning Trump now. Her son wants to see candidates from both parties. She thinks impeachment + Dem debate rules have shortchanged her in getting to know their candidates. pic.twitter.com/HuCtoOcj1r