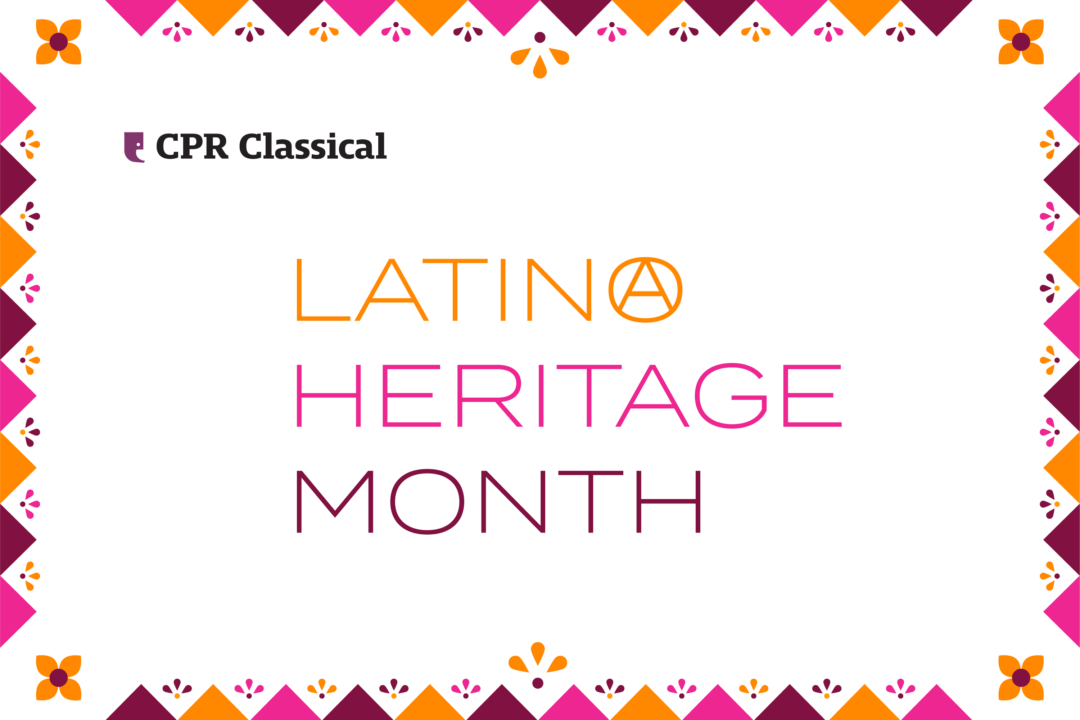 September 15 through October 15 is Latin Heritage Month! Here at CPR Classical, we’re celebrating Latinx composers and performers old and new, and while you may know names like Astor Piazzolla, Argentina’s king of the modern tango, you may not know some of the other composers who blended folk music traditions with classical music to create some amazing original works. We’ve put together a list of eighteen composers for you to listen for each day this month on CPR Classical. Plus, check out Indie 102.3's feature on Latinx artists from Colorado!

Manuel Ponce (1882-1948): Another student of Mexico’s National Conservatory of Music, Ponce was a composer and music educator who connected the worlds of classical concert music and traditional music and folklore. He wrote primarily for piano, guitar, and orchestra.

Ricardo Castro (1864-1907): Trained at the National Conservatory of Music in Mexico, Castro’s skill at the piano translated to his skill writing for piano, especially sentimental and dance music. He was invited to give masterclasses all over the world.

Agustín Barrios Mangoré (1885-1944): A standout classical guitarist of Paraguay, Mangoré was of indigeonous Guaraní descent and one of the most prolific composers and teachers of guitar. His inspirations included Baroque and Classical, religious, and folk music, and after an illustrious touring career, Mangoré settled in El Salvador and taught twelve students who went on to continue his legacy.

Heitor Villa-Lobos (1887-1959): Undoubtedly one of the most prolific and internationally in-demand South American composers in his time, Villa-Lobos wrote over 2,000 pieces for orchestra, chamber ensemble, and solo instrument with voice. These works were inspired by traditional Brazilian folk music and by the European classical tradition in which he was trained. His Bachianas Brasilieras, a set of nine Bach-inspired suites, is a popular example of this balance between musical worlds.

Ernesto Lecuona (1896-1963): A Cuban concert pianist and composer for both stage and screen. Lecuona’s title song for the 1942 film Always in My Heart was nominated for an Oscar, and his music was popularized in the United States by fellow Cuban bandleader and actor  of “I Love Lucy” fame, Desi Arnaz.

Silvestre Revueltas (1899-1940): A Mexican film score composer, violinist, and conductor. He trained at the National Conservatory of Music and worked alongside Carlos Chávez as director of the Mexico National Symphony Orchestra.

Carlos Chávez (1899-1978): A Mexican composer, music theorist, conductor, and educator, Chavez was known for weaving indigenous melodies and instruments into his contemporary classical compositions which sometimes included electronic music and multimedia elements. He was also the director of the Mexico National Symphony Orchestra, the second oldest orchestra on the North American continent.

Alberto Ginastera (1916-1983): An Argentinian composer and composition teacher. His music is deeply political and inspired by the Gauchesco tradition, a solitary nomadic symbol of Argentina. Ginastera studied under Aaron Copland at Tanglewood Music Center in Boston and later went on to teach Astor Piazzolla and Jacqueline Nova (Columbian electro-acoustic composer), among others.

Antonio Lauro (1917-1986): Called the “Strauss of guitar” by Australian guitarist John Williams. This Venezuelan composer believed that the guitar should have its own extensive repertory and set out to compose much of it himself.

Leo Brouwer (1939-): A Cuban composer, conductor, and guitarist hails from a family of musicians. His father’s uncle was Ernesto Lecuona (see above!) and he trained in the lineage of the renowned guitar instructor Francisco Tárrega. Brouwer studied composition at Juilliard under composer Vincent Perschetti and has conducted the likes of  the BBC Concert Orchestra and the Berlin Philharmonic.

Robert Xavier Rodriguez (1946-): A native of San Antonio, TX, Rodriguez studied under the legendary French composition teacher, Nadia Boulanger, as well as American composer Elliott Carter. He is best known for his eight operas, performed by major companies around the world. This major award-winning composer, however,  also writes beloved works for children.

Paquito D’Rivera (1948-): A performer whose website declares that he “defies categorization.” D’Rivera is best known as a 14-time Grammy award winning jazz saxophonist and composer, but his broad range of styles incorporates classical and chamber music. He has won numerous composition awards and residencies and has soloed with major orchestras all over the world.

Richardo Iznaola (1949-): The internationally regarded guitarist, teacher and composer attracted students to Colorado from around the world for over thirty years at the University of Denver’s Lamont School of Music. Iznaola was born in Havana Cuba and lived in Columbia, Venezuela and Spain before he moved to the U.S. in 1980. He started teaching at DU in 1983 and became Chair of the Guitar and Harp Department, Artist-In-Residence and Distinguished University Professor in Music. He retired in 2015, and has also composed extensively for guitar.

Arturo Márquez (1950-): Márquez’s father was a mariachi musician and his grandfather a Mexican folk musician. These early influences shaped his understanding of music. After Gustavo Dudamel’s Simon Bolívar Youth Orchestra took Márquez’s “Danzon No. 2” on their 2007 tour of Europe and the U.S., attention turned to his other music, and he is since considered one of the most popular living Mexican composers.

Sérgio Assad (1952-): This Brazilian guitarist and composer learned folk melodies as a kid and began to arrange them for guitar. His arrangements and compositions include classical and contemporary Latin American, European and American works for himself and his brother, Odair Assad. His daughter Clarice is an internationally award-winning composer, vocalist, pianist and educator.

Roberto Sierra (1953-): Born in Puerto Rico and now a composition professor at Cornell University, this contemporary composer most notably studied with György Ligeti, who influenced his award-winning writing. Sierra’s works, which range from orchestral and chamber to a bongo concerto, have been performed worldwide.

Gabriela Montero (1970-): Primarily a concert pianist, Montero is especially known for her improvisations on themes suggested by her audiences at concerts. One of many Venezuelan musicians outspokenly critical of her country’s government, Montero spends much of her time touring the world and playing with major orchestras. She joined violinist Itzhak Perlman, cellist Yo-Yo Ma and clarinetist Anthony McGill for “Air and Simple Gifts” (arr. John Williams) at Barack Obama’s first inauguration.

Gabriela Lena Frank (1972-): A native of California, Frank draws on her mother’s Peruvian heritage and tries to recreate the sound of traditional Peruvian instruments like a charango guitar with orchestral instruments, like cleverly arranged string pizzicato. Her imaginative work has earned numerous awards and she currently holds the position of the Philadelphia Orchestra composer-in-residence.

Astor Piazzolla (1921-1992): Called the world's foremost composer of Tango music, you've probably heard Piazzolla's music whether you recognized it or not: his "Libertango" and "Oblivion" have been used in countless TV and movie soundtracks in the Americas and beyond. The son of Italian immigrants to Argentina and raised in New York City, Piazzolla took an early interest in music and the bandoneon (similar to the accordion), which led to gigs in Tango orchestras when the family moved back to Argentina. Playing led to arranging, which led to composing and studies in Paris, and by the time he died in 1992, Piazzolla had written an estimated 3,000 pieces.

Celebrate Latin Heritage Month -- September 15 to October 15 -- and listen daily for music and stories on some major figures in Latin American music.