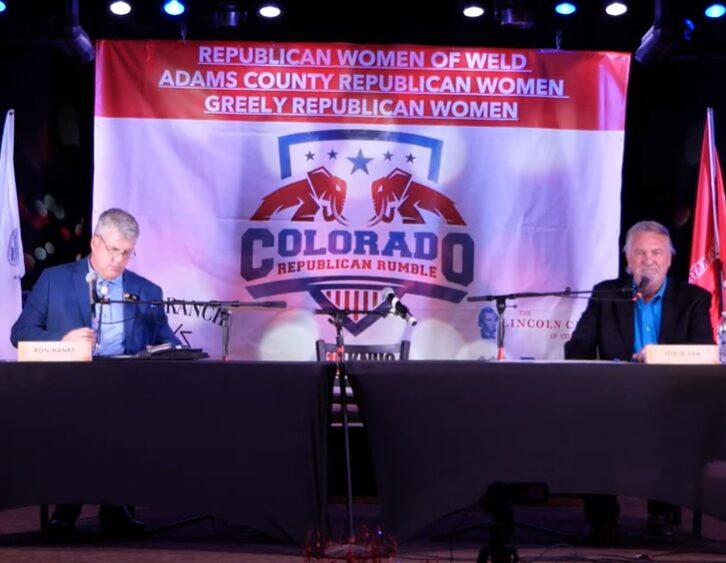 Colorado’s two Republican candidates for U.S. Senate — businessman Joe O’Dea and state Rep. Ron Hanks — faced off in their first debate on Saturday, with five weeks to go to the June 28th primary. The hour long debate touched on everything from abortion to electability to national security. The two are vying to see who will challenge Democratic Sen. Michael Bennet in the fall.

The Republican Women of Weld and Adams counties and Greeley hosted the debate at the Grizzly Rose bar and concert venue in Denver. Republicans have far more active primaries than Democrats this year and the GOP candidates for Governor, Secretary of State and the 8th Congressional District also took the stage earlier in the day. A few candidates did not attend.

In the U.S. Senate race, the debate highlighted sharp divides between O’Dea and Hanks, both of whom are relative newcomers to politics. O’Dea, who built his wealth through a construction company and also owns an entertainment venue near Mile High field, hasn’t run for office before. Hanks spent three decades in the military and is at the end of his first term in the state legislature.

In general, O’Dea has staked out more moderate positions as he keeps his eyes on the general election. On the other hand, Hanks is one of the most outspokenly conservative members of the statehouse. Here are some key takeaways from their faceoff:

Even though both candidates describe themselves as “pro-life”, they have vastly different takes on what policies they would push for in the Senate.

Hanks does not support legalized abortion at any point in a pregnancy, without exceptions. He stated he believes life begins at conception, going on to say, “the most heroic people I may have ever met were the young girls in my high school that carried their children to term in spite of the social stigmas. And we need to address that.”

O’Dea said he believes the procedure should be legal in some cases, and that the decision about whether to terminate a pregnancy "should be left up to the woman and her doctor early on in a pregnancy or in cases of rape, incest or medical reasons." O'Dea does oppose abortion later in pregnancy and any use of taxpayer money for the procedure.

O’Dea attacked Hanks for making false claims about the 2020 presidential election a centerpiece of his campaign,

“He’s a single-issue candidate. He wants to blow up voting machines,” said O’Dea, referring to a campaign ad in which Hanks shoots a photocopier with the label ‘Dominion Voting Machine’ on it.

“Hanks will rehash the 2020 election every day. Bennet will spew about abortion and social issues. Every hour that he does, Biden and Democrats will get a free pass on inflation, four dollar gas, record crime, and Colorado Republicans will have missed an incredible opportunity to reclaim our state and our country,” said O’Dea.

For his part, Hanks began the debate by reiterating his belief that Donald Trump won the 2020 presidential election.

At the statehouse, he has run bills to require in-person voting and hand counts, eliminating machines that tabulate votes, as well as a proposal to require specialty paper for ballots. None of those measures advanced.

At the debate, Hanks defended his record as sending an important message: “When you have a progressive Democrat majority, what you are doing — what we are doing on the conservative Republican side — is introducing bills so that people know that you have a voice.”

On winning over unaffiliated voters

Unaffiliated voters comprise the largest percentage of the electorate in Colorado and have become a key bloc for any candidate hoping to succeed statewide.

Hanks said his approach to appealing to unaffiliated voters runs contrary to what leaders in the party have preached: “I firmly believe if we have convictions and we tell people our beliefs and convince them that we are going to stand by them. They are going to come back to the party.”

He also emphasized his faith that voters will blame Democrats for inflation and the rising price of gas in particular, convincing them to give Republican candidates a fresh look.

Crime has increased in Colorado recent years, although at different rates, depending on the category. Inflation in the state has increased 9 percent in the past year.

O’Dea emphasized that the U.S. needs to continue supporting Ukraine as it resists the Russian invasion. “I don't know why we're afraid of this punk Putin. He's got a nuclear weapon. So do we. We need to not back down. I don't support boots on the ground, but by God, we've gotta quit letting him push us around.”

As for the recent news that Sweden and Finland are seeking to join NATO, upending their longstanding neutrality, O’Dea said he supports the idea, “as long as they pay their fair share. For far too long, we've had a lot of these NATO members that have short-changed us. I thought Trump did a good job by saying, ‘Hey, you know what? It's time for you guys to pay your fair share.’”

Hanks took a more measured approach, saying the U.S. should urge the Nordic countries not to pursue membership until the war in Ukraine is resolved.

He said Russia’s invasion is “100 percent Biden’s fault” and warned, “At some point, (Putin) can extract great pain against the United States — whether it's a cyber attack, whether it's blocking shipping lanes, actually his options are quite unlimited. He has three times the nuclear weapons we have in the United States because we negotiated ourselves down to that level... I'm not saying Putin's going to go nuclear, but he can do us grave damage.”

Hanks' statement about the U.S. and Russia's relative number of nuclear weapons is not accurate; the Arms Control Association estimates Russia has 6,257 strategic and retired warheads, while the United States has 5,550.

On who should lead the GOP in the Senate

Hanks said he wouldn’t support Sen. Mitch McConnell as majority leader if Republicans retake the Senate: “He called everybody that went to January 6th an ‘insurrectionist,’ as did Michael Bennet. I've got no respect for him. Those were peaceful Americans that were concerned about their country.”

Hanks attended the January 6th protests in Washington, D.C., and has blamed the invasion of the Capitol on ‘Antifa,’ something law enforcement investigations, and the criminal prosecutions of rioters, have refuted.

O’Dea said McConnell “did a lot of good things” but wouldn’t commit to supporting him without knowing who else might seek to lead the caucus.

On the federal legalization of cannabis

Both Hanks and O’Dea oppose legalizing cannabis at the federal level, and neither support changing the law to leave it up to states.

On the federal role in reducing crime

O’Dea called the recently-passed bipartisan fentanyl bill a failure and said he would consider trying to get the Department of Justice and the FBI more involved in prosecuting fentanyl crimes. The U.S. Attorney for Colorado has already been active in pursuing fentanyl manufacturers and distributors.

Hanks said the country needs to be supportive of police and prosecutors and blamed state lawmakers for putting unfunded mandates on law enforcement, creating gaps that may need to be filled with federal dollars.