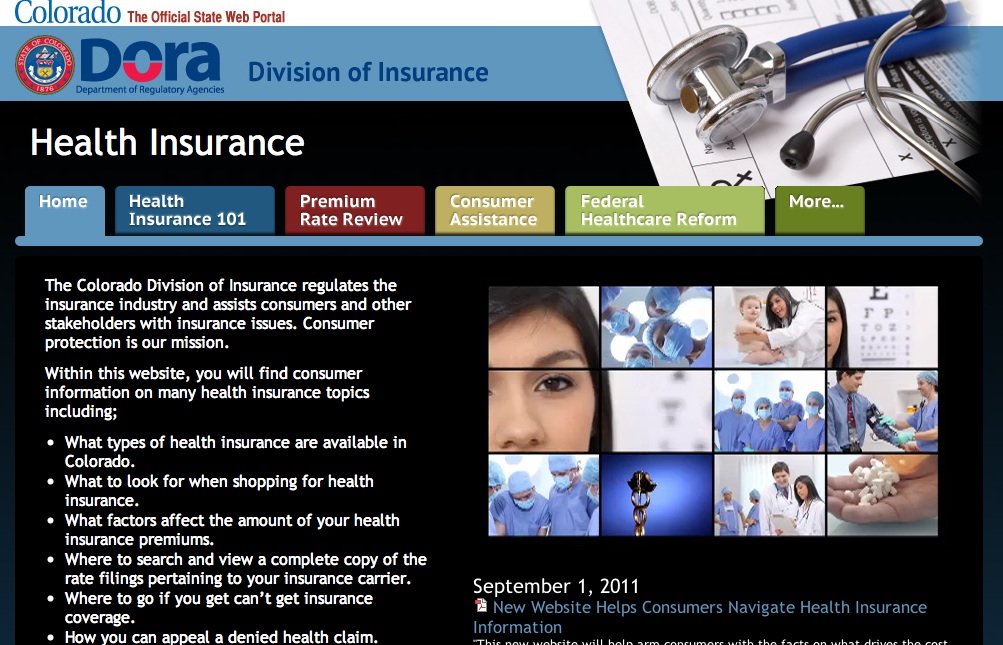 Would you like to know why health insurance rates have jumped so much in Colorado? Good luck.

Last month the Colorado Division of Insurance, which regulates health insurance companies, rolled out a new website. The site – funded with a $50,000 grant from the U.S. Department of Health and Human Services – was touted as the beleaguered consumer’s best friend in navigating the complexities of health insurance.

“It will help arm consumers with facts on what drives the cost of health premiums, how to shop smart for health insurance and how to get help when a claim is denied,” said Colorado Insurance Commissioner Jim Riesberg.

Why rates are rising is important knowledge because the average family health insurance policy in Colorado has doubled in price since 2001, according to the Kaiser Family Foundation.

Designers of the website, which was months in creation, envisioned a system where the flick of a computer key would let a consumer eyeball their insurance company’s rate history, going back 10 years or more. The site would explain precisely why the insurance premiums have leaped at higher percentages than wages or inflation -- or very infrequently stayed the same or declined.

But rather than concise explanations, website users are steered into a warren of insurance industry memos that often ramble on for 100 pages or more, in dense, bureaucratic language.

The website itself has no distinguishing name, and is difficult to navigate. It is currently linked within the consumer information page of the Division of Insurance’s website. Still, the site has been praised, including by Marguerite Salazar, the Regional Director for the U.S. Department of Health and Human Services, Region VIII.

“… This new website launched by the Colorado Insurance Commissioner is a shining example of consumer-friendly and transparent information designed to help consumers make informed choices and better understand their health care,” Salazar was quoted saying in a press announcement.

Some consumers who have tried to maneuver their way through, like Ami Reis of Denver, however, are not convinced.

“I’m on page 59 of 476 pages, I think my eyes are rolling back in my head,” said Reis, a Denver property management assistant. “I need an actuary, is that the point? To baffle people so they give up and won’t actually protest [insurance] rate hikes?”

For example, one company said it planned a rate increase of 11.8 percent – which could jump to 13 percent or even 43.5 percent if an “underlying trend assumption” proved out. Tom Abel, the state’s insurance rates supervisor, defines “trend” as an indicator that people will use more medical care.

Dede de Percin, executive director of the Colorado Consumer Health Initiative, advised on the site’s creation and likes it. But she admits it is difficult to maneuver. There are currently so many insurance plans to choose from, she pointed out, that consumers have no choice but wade through dozens before finding theirs.

No fewer than 242 insurance companies are doing business in Colorado – each of them with different individual and group plans. The result? Literally thousands of possibilities.

Abel, who led the website design team, concedes that the site is a work in progress. But he insists it is a vast improvement over the lack of information available in the past.

De Percin agreed. Among the benefits, she said, is it is now easier for consumers to file a complaint against an insurance company.

"It's such a light year ahead of where it was before," she said. "It's still hard to read, but at least you can find [the information]."