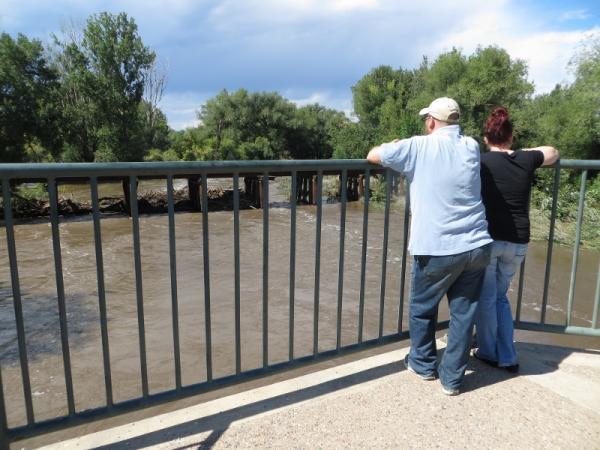 Rain ground recovery efforts from days of massive flooding across Colorado to a halt Sunday. Helicopters were prevented from conducting additional search and rescue efforts in Boulder and Larimer counties.

Thousands are still unaccounted for and just as many remain stranded in mountain communities cut off by washed out roads. Government officials are still getting a handle on unprecedented levels of destruction.

“The question I had is how can we ever recover form this,” said Larimer County Sheriff Justin Smith at press briefing. “I know exactly; inch by inch, mile by mile community by community. They’re taking this stuff back. They’re doing it. People are getting those things done out there.”

There were both frustrations and optimism over the weekend.

A break in the weather Saturday allowed for large scale evacuations in the towns of Lyons and Jamestown. In Estes Park, electricity, cell phone and internet were restored.

In Larimer County, Incident Commander Shane Del Grosso says about a dozen helicopters are ready for deployment as soon as the weather allows.“We have the horsepower to hit it hard out there…” stated Del Grosso.

On Sunday, Del Grosso estimated as many as 1,000 people will need to be evacuated across Larimer County. There are a few are choosing to stay behind.

“We cannot force them to leave,” said Del Grosso.“We can recommend… and my biggest concern is with knowing what’s going to come over the next couple of months they change their mind and they don’t have the abilities they have now to get them out.”

At an evacuation center in East Fort Collins, no air evacuations Sunday translated into a slower day. Many did pass through the center looking for loved ones.

As evacuees Michael and Carrie Street came looking for Michael’s mom, who lives in Glen Haven. The Street’s decided preemptively to evacuate their west Loveland home over the weekend.

For Carrie Street the water got too close for comfort saying, “I think we thought it would be OK, but it just keeps climbing…”

Search and rescue efforts are expected to resume Monday in Larimer County as warmer and dryer weather is expected to move in.

Durrie Bouscaren contributed to this story.