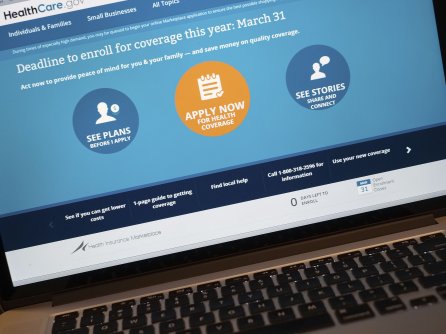 (Photo: J. David Ake/AP)Colorado is among the states that saw the most people gain health insurance nationwide in the last year.

Researchers found the state ranks 5th among states in terms of the number of people who are newly insured since the Affordable Care Act required people have health insurance.

A new Gallup poll says that the number of uninsured Americans nationwide has dropped about 4 percent since this time last year.

"Colorado is one of our top 10 biggest redducers," he says. "17 percent of Colorado adults in 2013 were uninsured, that's dropped to 11 percent in 2014, a six point decline in the uninsurance rate."

Witters says declining uninsured rates are a result of the federal health law.

States with the biggest drops in the number of uninsured, including Colorado, have done two things: They've each expanded Medicaid and created their own health insurance marketplaces, or exchanges, such as Connect for Health Colorado.

States that decided not to take such an active role  saw, on average, only about a 2 percent decline in their uninsured rates.