Hundreds of thousands of students are taking new online tests in English and math this month called PARCC. The tests are aimed at measuring what students know with an emphasis on critical thinking, problem solving and synthesizing information.

Kerrie Dallman, president of the Colorado Education Association, told the crowd her union recently conducted 14 teacher forums across the state.

“The overwhelming common theme that emerged from these forums is that there is too much testing!” she said to a cheering crowd. “Of all the things we teach our kids, the most important is the love of learning. No bubble test can ever measure that. What educators need now is the time to teach so that students have the time to learn. Too much time spent on standardized testing takes up too much valuable time spent on learning.”

Dallman said teachers at the forums expressed anxiety and "in some cases heartbreak" over how excessive testing is hurting students’ ability to learn.

The crowd periodically chanted “too much testing” and “more than a score.”

State lawmakers in the Republican-controlled Senate and Democratic-controlled House are struggling to agree on the role and balance of testing in schools. Many conservatives and liberals are united in a desire to reduce the amount of testing. Testing supporters, though, don't want to do away with the PARCC tests, arguing they'll ensure teachers and schools are effectively teaching to more rigorous academic standards.

Several bills are competing for support. Some reduce testing to what is required by federal law (3rd-to-8th-grade language arts and math tests, plus once in high school, as well as periodic science tests); other bills lower how much test scores count in a teacher’s evaluation. Right now, state law mandates that half a teacher’s evaluation be determined by students’ test outcomes. 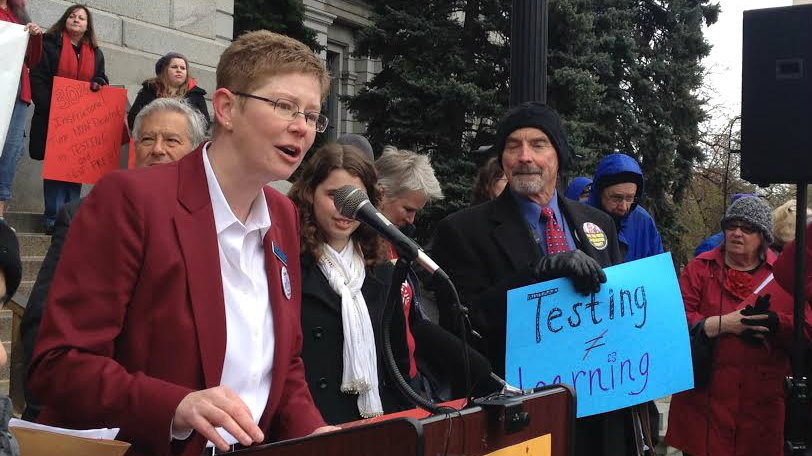 (Photo: CPR/Jenny Brundin)A “compromise” bill, supported by Gov. John Hickenlooper,  is now reported to be dead.  It would have eliminated mandatory testing in 11th and 12th grades and streamlined duplicative literacy testing for young children. Another “compromise” bill to reduce testing is still being negotiated.

Still another bill,  co-sponsored by State Sen. Nancy Todd, has its first hearing Thursday. SB15-223 would remove penalties to districts and schools when parents opt their children out of standardized tests. Federal law mandates that schools achieve a 95 percent testing participation rate or face sanctions.

"Schools should have meaningful dialog with parents about standardized testing that does not include the unproductive threats of harm to funding, accreditation, and teaching careers," Todd told the rally. "We need to build public confidence in our schools by using test results to improve student learning and the quality of teaching."

Todd said the bill does not encourage parents to opt out their children, but if a parent decides testing is not in the best interest of their child, “the state should respect that decision.”

Teachers came to the rally from as far away as La Jara and Alamosa in southern Colorado to register their concern about the impact of testing on their classrooms.

Fourth grade teacher Renee Fugere and Brenda Goodwin, who teaches fifth grade, traveled to the rally with 40 other teachers from Grand Junction.

The two Mesa View Elementary teachers are concerned about the amount of time – 12 hours – just spent on taking the PARCC tests so far.  Students take another set of PARCC in May.

“It took a lot longer than we expected,” Goodwin said.

The practice test went well but during the real test, “things quit working that worked before,” she said. “You’d have to go back to the previous question and then go forward again and sometimes they would have symbols that didn’t work right. That didn’t happen on the first [practice] test.”

Fugere said some students struggled with flipping back and forth between reading passages because they don’t get much computer practice in class. She has two computers in her class of 24 students.

The school had to buy 10 extra computers for testing with money from the volunteer parent teacher organization so three classrooms could test at one time.

“Our entire school has had to flip flop because we don’t have enough computers,” she said. “Our music teacher had to move to an empty classroom. We are testing in the old music room so we would have enough juice for all the computers. We have changed the entire school around to accommodate for this.”

Fairview High senior Sydney Chinowsky was one of hundreds of Boulder seniors who opted out of tests this year.

“Colorado is sending tens of millions of dollars to testing companies like Pearson," she told the rally. “Our school could instead use this money to buy books and materials, improve classroom technology, re-introduce art and music programs and to hire quality educators.”

Overall though, opt out rates in Colorado are low. As of Wednesday, 910,329 tests have been taken with 540,000 students expected to complete testing by early April.