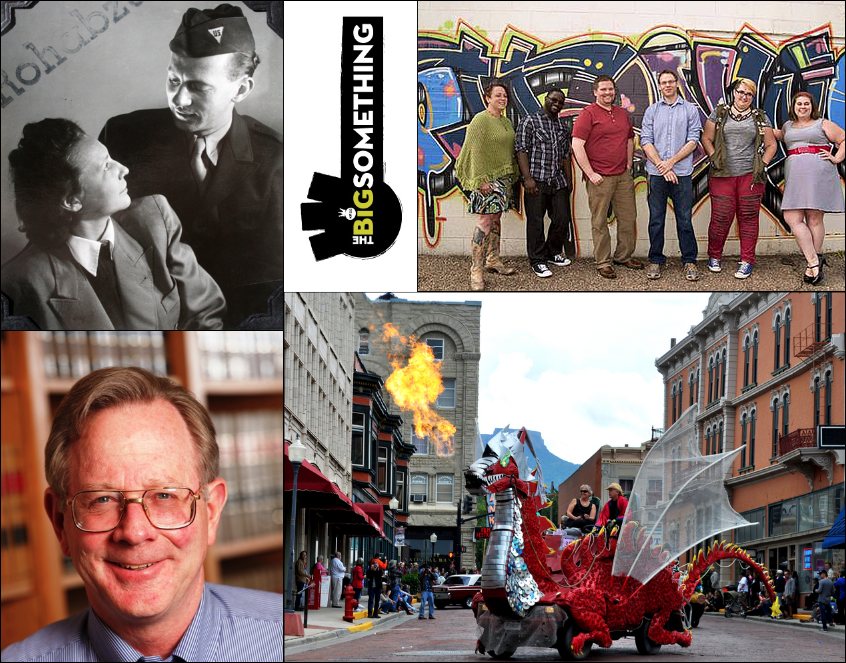 On Episode 7 of The Big Something Radio Programme we hear from the soon-to-be newest member of the Colorado state Supreme Court, Richard Gabriel; we bring you an interview with Artist Rodney wood, about Artocade: Trinidad’s Art Car Parade; Eliot Gray Fisher of Austin Based ARCOS dance discusses The Warriors: A Love Story, a multimedia performance coming to colorado springs; And lastly, we check in with members of Hear Here’s national slam poetry team.

The Colorado Supreme Court is about to get a new judge. Richard Gabriel (above) will soon be sworn in as Colorado’s next State Supreme Court Justice. He's leaving his seat on the Colorado Court of Appeals. He received his undergrad degree at Yale University and went to the University of Pennsylvania School of Law. He talked to statehouse reporter Bente Birkeland about his view of politics in the judicial process, why he became a lawyer, and some of his significant cases.

Judge Gabriel is taking a seat being vacated by Justice Gregory Hobbs (right).  In addition to being a judge, Hobbs is also a water advocate and poet.  KRCC's Andrea Chalfin spoke with Hobbs in 2012 and asked him to read a few of his poems and talk about his perspective of the sacred importance of water. Hobbs is retiring from the Colorado Supreme Court.

Trinidad, Colorado has been known for many things over the past Century. From the site of the Ludlow Massacre to the so-called Sex Change Capital of the world, the tiny town just across the border from New Mexico has history more colorful than most cities. Artist Rodney Wood hopes to keep that  tradition alive. Commissioned  to create an event that would help Trinidad rebrand itself for the 21st Century, Wood created the Artocade, a weekend-long art car parade, dance party and circus in mid-September that now brings in cars from all over the United States. This Year’s artocade is coming up the weekend of September 12th. When following interview first aired in 2013, the event was just getting started. Now, says Wood, they're expecting over 78 entries.

Artocade will take place this year on on September 11,12 and 13 in Trinidad, Colorado. For more information on the event, go to artocade.com.

This Friday, September 4th, and Saturday, September 5th, Austin-based multimedia performance group, ARCOS Dance, will bring their original production, The Warriors: A Love Story, to Colorado Springs. Through an interdisciplinary mix of music, dance, theater, and film, The Warriors: A Love Story explores the love, lives and legacies of Colorado Springs residents J. Glenn Gray and Ursula Gray. Glenn and Ursula Gray met in Germany, the aftermath of World War Two. He was an American soldier from rural Pennsylvania with a PhD in Philosophy, she an accomplished dancer and athlete from the decimated German city of Dresden. After an unlikely courtship and marriage, the two found their way to Colorado Springs, where Glenn was offered a job teaching philosophy at Colorado College. In the decades that followed, the two would go on to make substantial contributions to the local community and national intellectual culture. In particular, Glenn would become known for his book “The Warriors: Reflections on Men in Battle,” published in 1959, as well as for his work as an early translator and champion of the 20th century German Philosopher Martin Heidegger. In anticipation of next weekend’s performance, Producer Jacob Brownell spoke with Eliot Gray Fisher — Multimedia Director of ARCOS dance, and the grandson of Glenn and Ursula Gray — about Glenn and Ursula's story, and why it’s still relevant today.

The performances on both Friday, September 4 and Saturday, September 5 begin at 7:30 p.m. in the Richard Celeste Theater at the Edith Kinney Gaylord Cornerstone Center for the Arts at Colorado College. Both shows are free and open to the public.

Hear Here is a community foundation in the pikes peak region that brings people together to celebrate the art of performance poetry. At monthly open mics and slam competitions, Hear Here provides a space where poets can share their work and hone their skills as writers and performers. This summer, Hear Here sent several poets to the national poetry slam in Oakland. Big Something Intern Charlie Neaves spoke with the team members prior to their trip.

All the performances you this piece were recorded at the 2015 poetry slam team send off show at the Tim Gill Center for Public Media here in Colorado Springs.