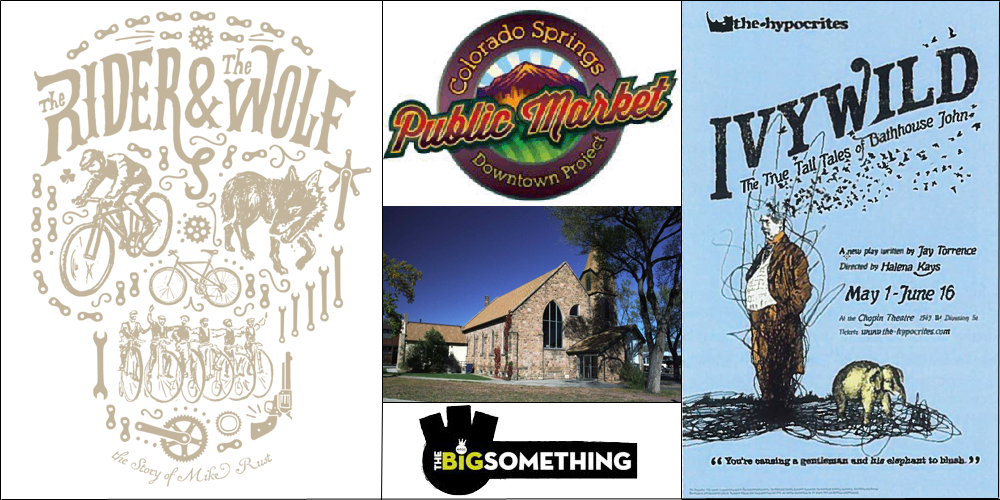 On this episode of The Big Something: filmmaker Nathan Ward discusses The Rider and the Wolf, his new documentary about the disappearance of Colorado Mountain Bike pioneer, Mike Rust; Representatives of the Colorado Springs Public Market talk about the past, present, and future of the Public Market project; Local author Molly Merry recounts colorful stories from Colorado Springs’ Ivywild Neighborhood; and we revisit an interview with Senga Nengudi in advance of her upcoming appearance at the Gallery of Contemporary Art.

In his new documentary, The Rider and the Wolf, filmmaker Nathan Ward tells the story of the disappearance of Hall-of-Fame mountain biker Mike Rust. It isn’t just a murder mystery, but a neglected chapter in the history of Mountain Biking. Producer Noel Black spoke with Ward from his home in Salida about the film, Rust’s life and his legacy.

The Rider & The Wolf - Trailer 2 from Grit & Thistle Film Company on Vimeo.

If you’ve ever been to Seattle’s bustling Pike Place Market, where fishmongers, florists, farmers and all manner of other vendors gather each day to sell their goods to locals and tourists alike, then you know the potential of a public market. For the last four years, a coalition of local business people, non-profit leaders, and food activists have been working to realize that potential in Downtown Colorado Springs, in the form of the Colorado Springs Public Market. Earlier this month, the Public Market board announced plans to open in 2016 in the Historic Payne Chapel, formerly home to the Green Man Taproom, near the corner of Weber and Costilla Streets Downtown. Jake Brownell recently spoke to Board President Dave Anderson, Secretary Sally Davis, and board member and owner of Ranch Foods Direct, Mike Callicrate, about their vision for the market and their plans for the new space.

When you hear the name Ivywild these days, you likely think of the old school turned brewery and market just south of I-25 in Colorado Springs. But Ivywild, a whole neighborhood at the foot of the Broadmoor, was once a small suburb of Colorado Springs with a history as rich and colorful as any city in Colorado. Authors Molly Merry and Linda Johnson recently revived some of that history in a small book titled "Ivywild: A Treasure Filled Neighborhood History". Producer Noel Black spoke with Merry about some of the characters and stories from the little suburb on the other side of the tracks. You can pick up a copy of the book at the Dry Goods Store at Ivywild, or Books 4 U on 8th Street.

In our last segment, we revisit renowned local artist Senga Nengudi. Her retrospective, Improvisation Gestures, is on display at the UCCS Gallery of Contemporary Art through December 5, 2015. Next Wednesday, October 21, Nengudi will participate in a conversation with curators Elissa Auther and Nora Burnett Abrams about her work.