After a tough day at Cherry Creek High School, junior Claire Becker likes to go home and do what a lot of other teens do -- watch television.

One major difference though: Becker watches her favorite shows in German.

Becker is also frugal -- very frugal. When she heard she could attend a university in Germany, “without being buried in crippling financial debt,” she leapt at the chance.

“The thought of putting my family in a position to have to assist me with that, or to put myself in that position, is honestly a huge cause of anxiety for me,” she says.

University is funded by German taxpayers. And foreign students, who make up about 10 percent of Germany’s student body, pay the same price as natives: nothing.

It is a concept Stefan Biedermann, Germany’s deputy consul general in Los Angeles, says many Americans struggle to understand.

“The faces that I see say, ‘I don’t believe you, there must be strings attached---like a mobile phone contract for the first three months are free, and later on you don’t know what’s happening.' That’s not the case. It’s the truth.”

Colorado is following national trends. Last year, more than 10,000 American students studied in Germany. That figure also includes students who study abroad for a semester or year. In Colorado, the number of students studying abroad for a semester or a year is also rising. In 2013-14, 5,355 students from Colorado colleges and universities were studying abroad, up from 5,067 the previous year.

The top countries for U.S. students are the United Kingdom, Italy, Spain, and France, followed by Germany along with a few other countries.

“Institutions are recognizing the value of an international experience for their students and they’re putting more of an emphasis on it,” says Inta Morris, who heads up Study Colorado.

Germany isn't the only country offering free or almost free tuition. Others include Brazil, Slovenia and France.

How To Attend University In Germany 101

At a recent information session in Denver for parents and prospective students, Biedermann, the deputy consul general, warned parents that the language isn't easy.

“Learning German is really a challenge,” he says. “And your kids will tell you, German grammar is hell."

Some have driven two and a half hours for this night. They’re welcomed with bags of schwag – maps of Germany, books, pamphlets, stickers and pens -- all to help them figure out how to attend university in Germany.

Hanni Geist with the German Academic Exchange Service introduces them to a website that describes the various programs at Germany’s approximately 400 universities. Study in Germany offers another list. There are even degree programs in English. But students here want to study in German. Geist tells them that the process of getting there is fairly simple. 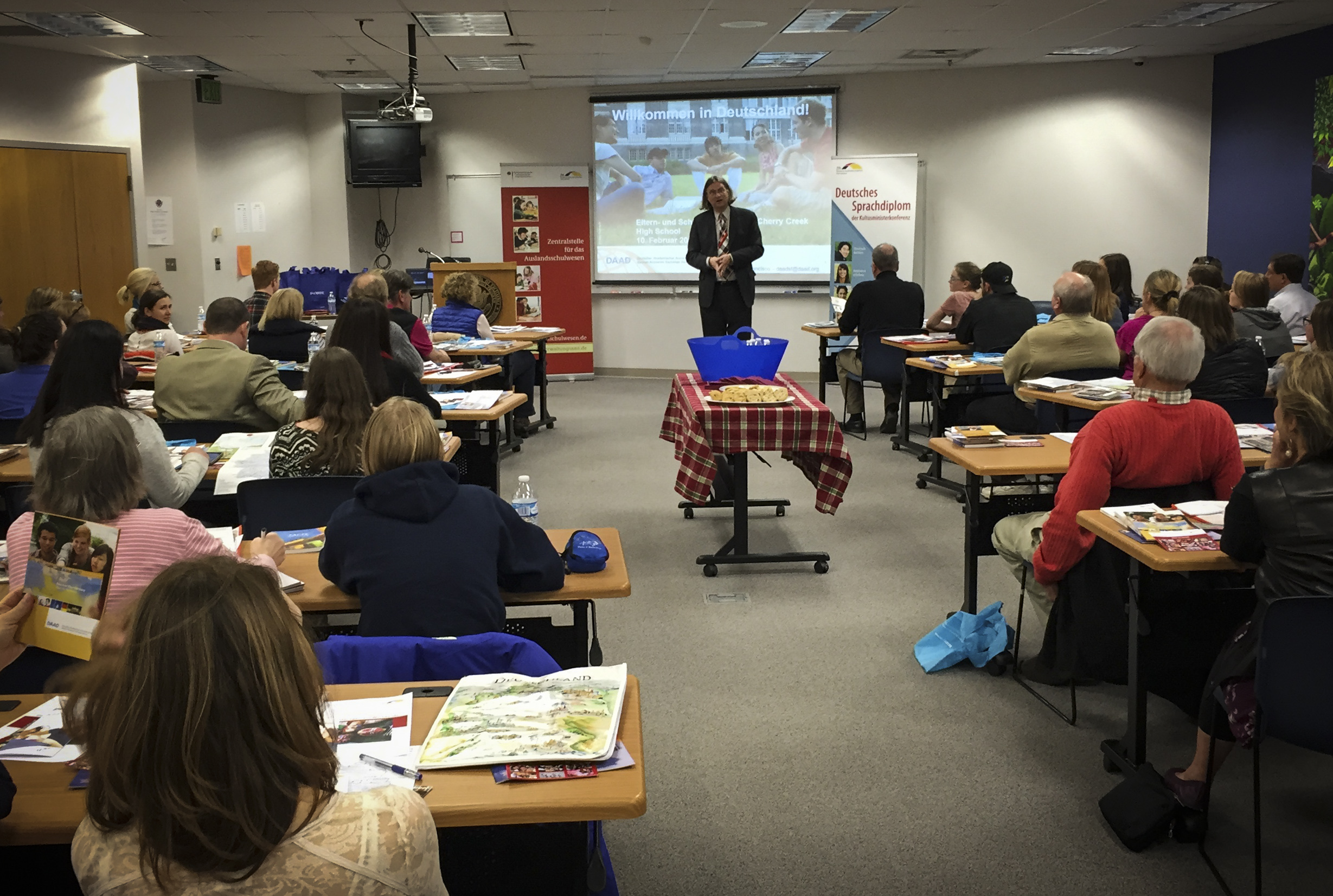 Once a student like Claire Becker passes a German language test (Deutsches Sprachdiplom I and II), there are no letters of recommendations, volunteer work, or examples of citizenship that are required on applications to American universities – it’s the GPA that makes it or breaks it.

“It’s the application and that’s it,” Geist says, explaining that each university may allot 10 to 20 percent of its spaces to international students. The German degrees are recognized in the U.S. Biedermann says Germany system of higher education is much more “uniform” than the United States.

Eventually, Biedermann gets the question he’s always asked - why do Germans foot the bill for everyone?

Biedermann says American students add to the diversity of intellectual life on campus, and when they return to the U.S., become citizen ambassadors for Germany. But the push for international students isn’t all altruism.

Contributing To The German Workforce

Germany’s population is aging and it’s facing a serious shortage of skilled labor. The Cologne Institute of Economic Research predicts a shortage of 1 million workers by 2020.

“That’s what German universities are very interested in -- getting more people from all over the world to study in Germany and well, the idea is to also have them contribute then to the German workforce and German research,” Geist says.

Cherry Creek High senior Hannah Keller has already been accepted into a program consisting of study plus work experience. She’ll work at SAP, the largest business software company in the world, headquartered in Germany – then study the other half her time at the University of Applied Sciences in Ludwigshafen.  Keller wants a break from the “ranking”-obsessed American college culture. 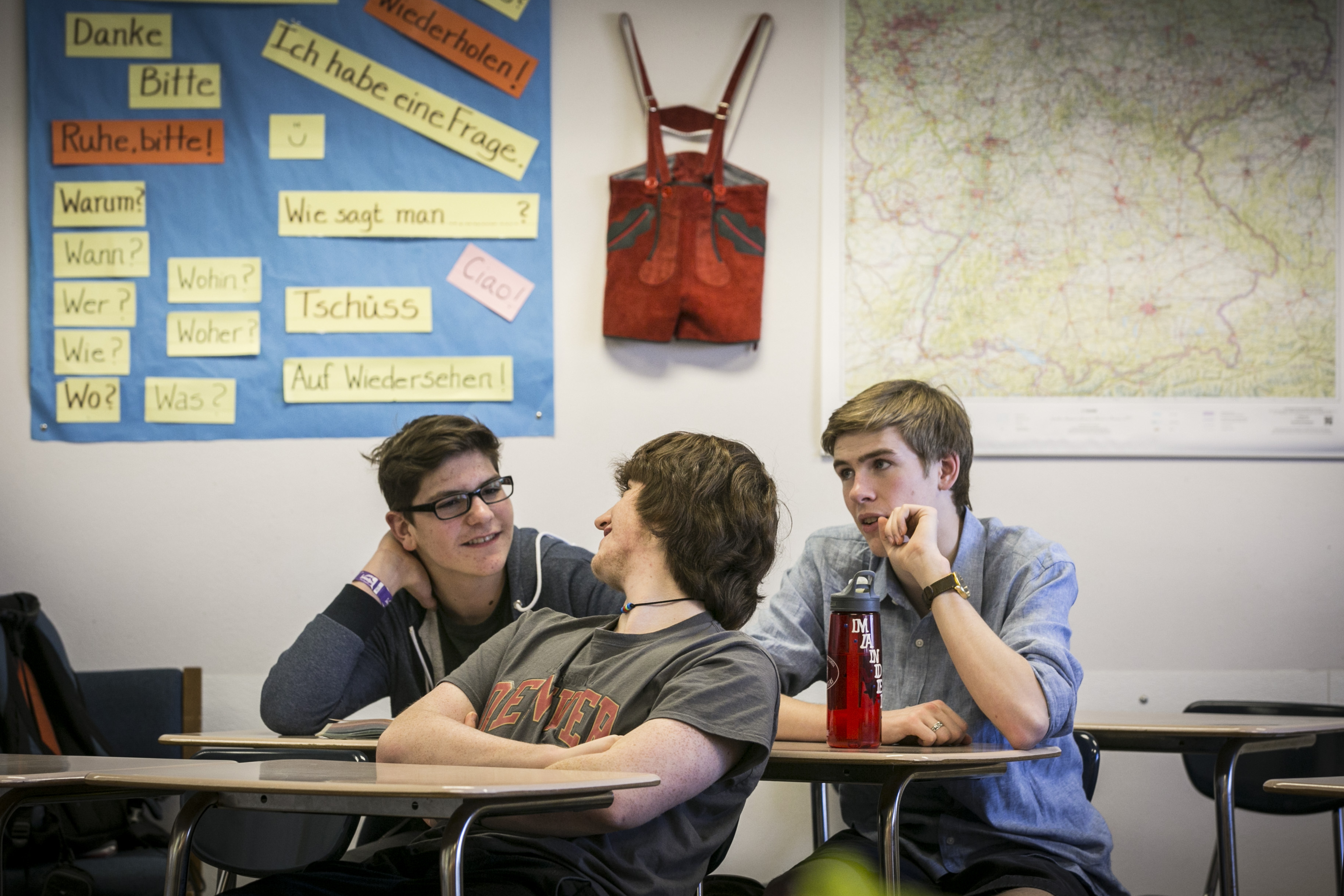 “There they focus more on the experience and I want to get away from the expectation that you’re just doing it to build your resume or to impress other people,” she says. “There you get to see a different way in which people live, different perspectives. Even just the different government structures gives people a different outlook – it’s really interesting to see that and helps you broaden your view of the world.”

It’s a special kind of student who will study across the pond, says Jay Malone, a graduate of a German university. He now runs his own company – Eight Hours and Change – the time it takes to fly to Germany - to help students make cultural shift.

He helps students find universities that are a good match for their background and their interests, so that programs will offer students good future career prospects. He says three-quarters of students who contact him do so because they’re read the tuition is free.

“German’s higher education environment is very student driven," Malone said. "If a student only goes if they found out that the tuition is free, then they’re likely to struggle."

He says the German government provides a wealth of information for anyone who is interested in coming to German to study. But once there, he says, you have to be self-motivated and adventurous. Students don’t live on campus; they find their own housing in the city. They are no fancy gyms and rock walls. There’s not as much hand-holding, like advisors ready to catch you if you stumble.

“You can’t expect to go over there and have a counselor who will be there at your beck and call to support you anytime that you run into any struggles,” he says.

Students admit to some anxiety about studying an ocean away.

“In theory I know the language and I can speak it. But I’ve never had the chance to go into a college environment and test my language,” says Alexander Spitzer, a Cherry Creek High junior. But he sees how much his brother is paying for college here and says Germany could be a “cost-effective” solution for higher education.

“It’s just a better way to get that engineering degree I’ve been hoping for,” he says.

Claire Becker recognizes that the leap from watching German comedies on her laptop to studying at a university in Munich is a big one.

“In some ways it’s kind of scary. But in some ways it’s really encouraging that I can be my own person," Becker said. "I have to sink or swim and I have the feeling that I’m going to swim."