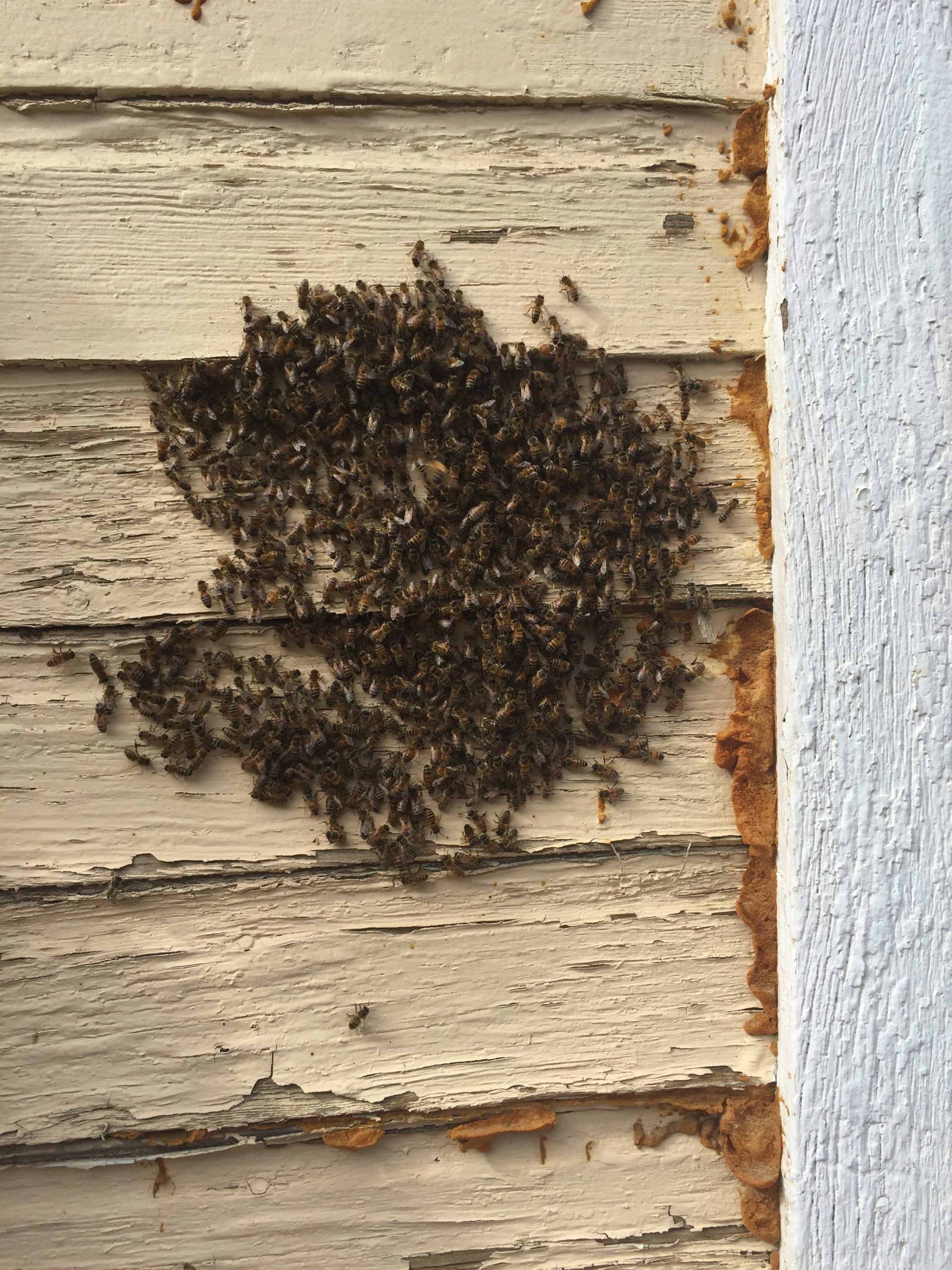 Amy Rawn Feral honeybees entering and exiting a hive through the exterior wall of Olympia and Fletcher Holiday. 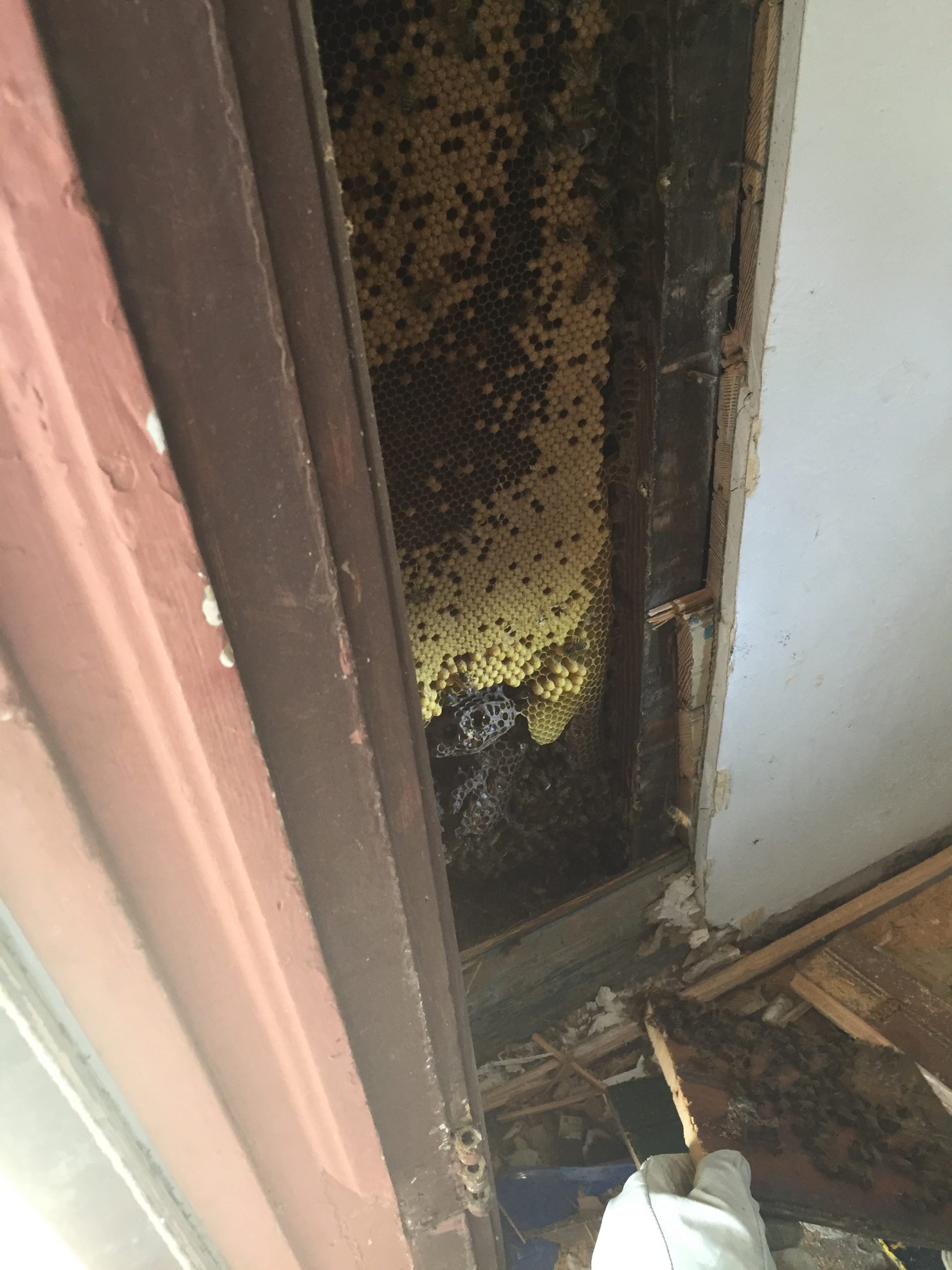 Amy Rawn The feral hive inside the wall of Olympia and Fletcher Holiday's home. 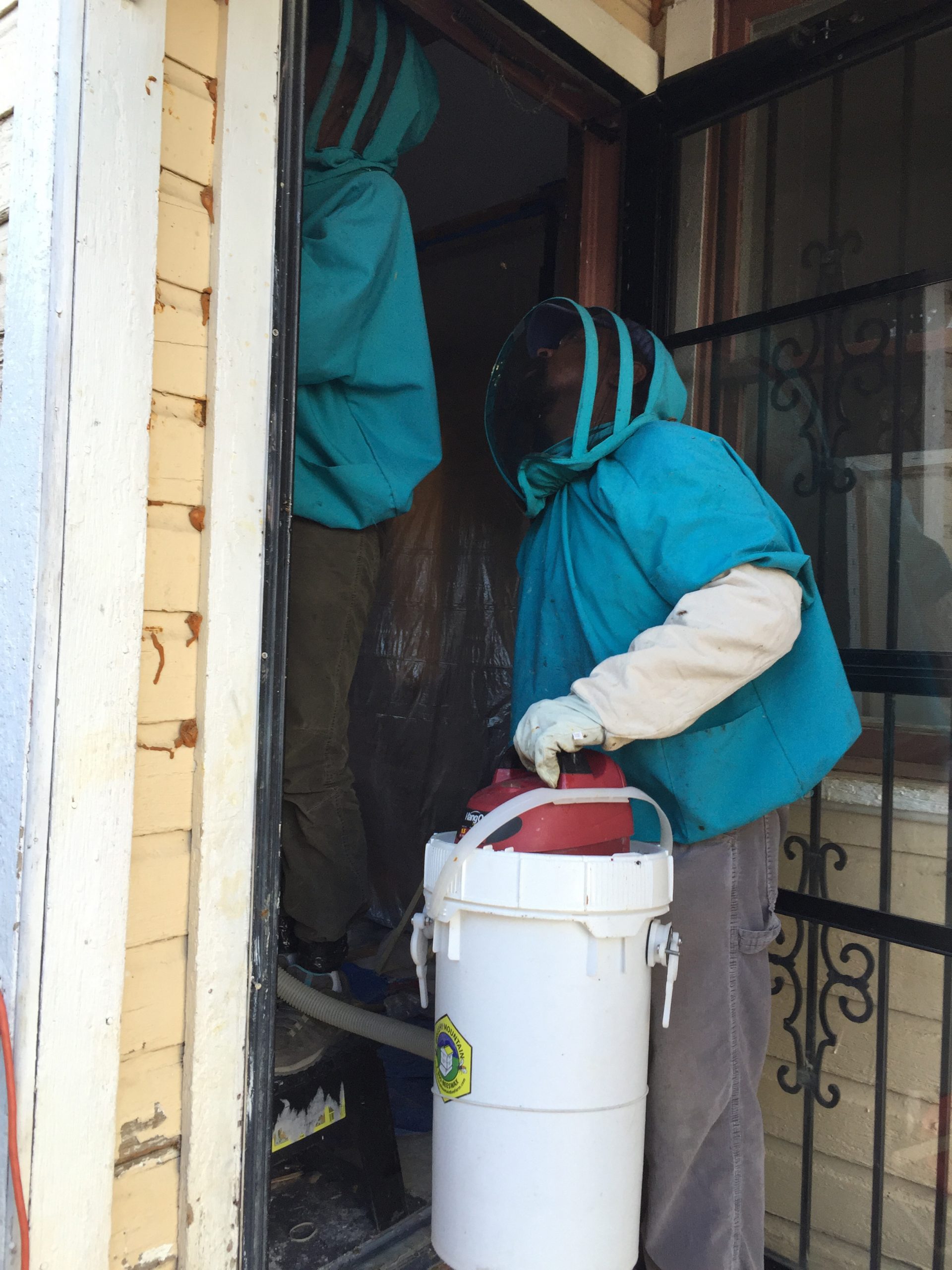 Amy Rawn Lazarus Fields using the bee vacuum to safely remove the bees from the wall. 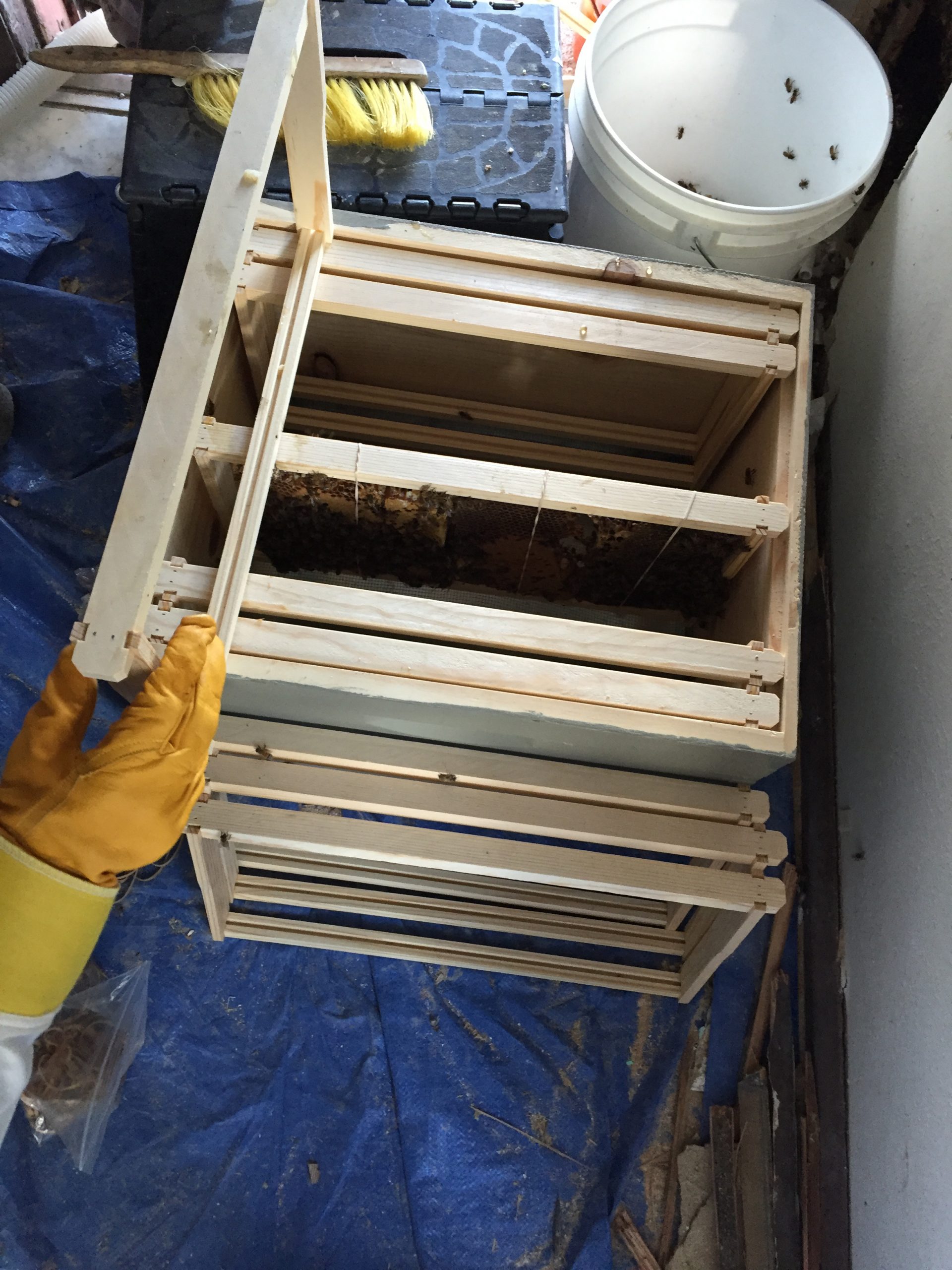 Amy Rawn The feral hive being transplanted into a traditional bee box.

On a warm Saturday afternoon at their home in Pueblo Colorado, Fletcher and Olympia Holiday are preparing to rip out the one-by-ten foot section of wall adjacent to their front door.

By their side is Colorado Springs beekeeper Lazarus Fields. All three of them are outfitted in mesh head nets, gloves and full-body protective clothing. Behind the wall, there is a colony of honeybees numbering in the thousands. If you stand close enough, you can hear their persistent hum.

“This whole entire two-foot section in between the corner and the support stud, it’s just filled with honeycomb,” says Olympia Holiday. “So I am guessing that they are going to slice along that stud and then yank everything out of the corner. But it’s going to be complete demolition of this wall of our house. “

When the Holidays moved into their home in November, they noticed the bees right away, says Olympia. “I searched honey-bee removal on Google and I emailed eight or ten different people. Lazarus was the first to respond. “

Although Lazarus Fields is here to remove the bees, he’s no exterminator. In fact he is here to save them.

A teacher by day, Lazarus fields is also an apiary owner and a mentor at Pikes Peak Beekeepers Association. He looks after multiple hives in the Pikes Peak region and also produces and sells honey for his company, Fields of Natural Honey. He also performs what are called cutouts, or feral hive removals, which is what brings him to the home of Olympia and Fletcher Holiday this afternoon.

“A cut out is where you remove feral bees from usually structures, that, you know, they choose not such a great place to start their home,” says Fields.

When Lazarus removes honeybees from a structure he puts them to good use. He relocates and incorporates them either into one of his own hives or the hive of a fellow beekeeper where they can be used for honey production.

The colony of bees living in the side of the Holiday’s home is an example of a feral hive. These types of hives form on their own, without the assistance of a beekeeper, sometimes in unwanted places, says Mike Halby, secretary of the Pikes Peak Beekeepers Association. “A feral hive is a group of bees that has occupied a space be it the hollow of a tree or some place in a building that does not have a beekeeper that looks after it.”

According to Mike Breed—Professor of Ecology and Evolutionary Biology at the University of Colorado, Boulder—most honeybees rely heavily on beekeepers to maintain their population.  “Many honeybees have been kept in our landscape in the Americas, they have actually replaced a lot of native pollinators. So at this point, I’d say beekeeping is essential to maintaining pollinator populations.”

In other words, most honeybees in the US are like domesticated animals—they need people to look after them. But some feral bee colonies have found a way to survive on their own.

Although feral honeybees that take up residence in a structure can be troublesome for homeowners, some beekeepers like Mike Halby covet these hives. “Long standing feral colonies or wild bees are said to be survivor bees,” says Halby. “They don’t have a beekeeper that looks after them and they have survived on their own, through a development of resistance, problems that we see in some managed colonies. And we do really try to capture those genetics if we can.”

Beekeepers have long used insecticides and antibiotics to fight off diseases and mites. But the fact that feral hives have survived without chemical treatments is intriguing to beekeepers like Lazarus Fields who wants to raise bees without excessive chemicals. “It’s very beneficial for us at Fields of Natural Honey to go get these bees because they are controlling things on their own and that is what we are trying to propagate—bees who don’t need chemicals.”

The Holidays feel lucky that their new home came with the unexpected surprise of a thriving bee colony, although they prefer for them not live in their entry way. They plan on moving these bees in their wall into more practical bee boxes behind their home.

“Yeah, we're gonna just move ‘em about a hundred yards into the backyard and just keep learning, and having them be our neighbors and pollinate our food and plants and get a little bit of honey,” says Fletcher Holiday.

With growing concerns about colony collapse, the Pikes Peak Beekeepers Association urges homeowners to turn to relocation rather than extermination. Projects like the Holidays' are in line with the philosophy of the organization.

“Our beekeepers get bees at a minimal cost, we save the bees and we try to educate the public that they are not something to be feared,” says Mike Halby.

Once the wall is removed, Lazarus carefully cuts sections of the comb out of the cavity with a tool that looks like a serrated cake knife. He hands the pieces, still dripping with bees, to the Holidays who then place them in frames that will go into a bee box.

Once the hive is safety transported to the backyard, the Holidays will likely have a healthy population of pollinators and chemical free honey for years to come.