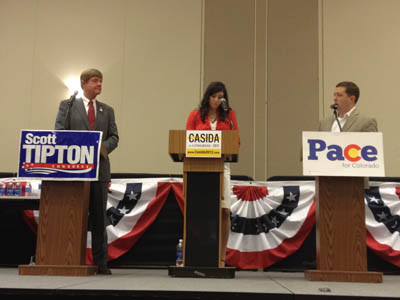 Candidates for Colorado’s 3rd Congressional district battled it out in a debate over the weekend in Grand Junction. The sizable district covers most of the Western Slope, the San Luis Valley, and a handful of Southern Colorado counties—like Pueblo. Reporter Elise Thatcher was at the debate and has this report.

Around 300 people gathered Saturday night in a large hall at Colorado Mesa University. Many wore t-shirts showing support for Republican incumbent Scott Tipton, or Democratic challenger and state representative Sal Pace. The evening began with a light moment, as the moderator introduced the candidates:

"Before we start I thought we’d have a little prayer. And it’s the candidate’s prayer: Lord, may my words be sweet, cause I might have to eat them tomorrow."

But the mood quickly became more tense. Republican incumbent Scott Tipton has represented the district for one term—and said that during time he and his staff have worked with lawmakers from both parties.

"We’ve been able to work with Democrats, and work with Republicans, to be able to pass five bills through the whole House of Representatives. These are bills that reflect the values of where we live. And most importantly probably right now, to be able to get our people back to work."

Tipton did co-sponsor five bills that were approved in the House or were rolled into other legislation that passed. But Democrat Sal Pace challenged Tipton’s bipartisan track record.

"Thirty-three votes in two years, to repeal Obamacare—when did you expect a different result? After vote 15? 20? 30? It’s just more partisanship out of Washington that we’re all sick and tired of."

"Scott Tipton votes with the Republican Party 93% of the time."

Tipton is from Cortez, in Southwest Colorado. He took office in early 2011, after unseating three-term Democratic incumbent John Salazar. Tipton wasn’t a Tea Party candidate, but was helped by that movement’s push to replace career politicians in Washington. Last year the Republican’s daughter was caugsht up in a flap over what may been an conflict of interest. Tipton apologized to the House ethics committee and the matter seems to have ended there.

At Saturday’s debate, Sal Pace described himself as more of a people’s candidate than Tipton. He argued he’d be more willing to reach across the aisle, using government spending as an example.

"This is a critical issue for the future of the country, I’m a Democrat who’s willing to buck my own party and say that I believe in a balanced budget amendment. We can balance the budget, as we have in Colorado."

It was the second debate for Tipton and Pace—but this time there was an independent candidate, too. Pueblo businesswoman Tisha Casida argued she doesn’t have to answer to party politics or special interests.

"I want immediate solutions, for our economy, for energy independence, for property rights, and to protect our natural rights and civil liberties."

Casida did raise eyebrows at times, like when she said the Colorado National Guard should stay home and fight wildfires. But the independent also won applause, like after she said people should have the chance to opt out of Medicare.

When it came to jobs and energy, Representative Sal Pace said he supports a range of traditional and renewable sources, echoing President Obama’s so-called "All of the Above" strategy.

"Energy in the 3rd congressional district of all types means jobs, whether it’s natural gas, or solar, we have the largest solar plant in the state in the San Luis Valley, or wind development, because we have the largest wind turbine manufacturer in the world."

But that hasn’t meant guaranteed jobs for Colorado. That wind company, Vestas, announced layoffs at the Pueblo plant this year, because of uncertainty over a federal tax credit. Both candidates support extending it. And Tipton argued he has better solutions for energy development. He described a proposal he’s co-sponsoring.

"This bill will require the Secretary of Interior working with the Secretary of Agriculture to actually develop a plan for responsible development of these resources on our public lands, based off of on 30 years non partisan estimate of energy needs in this country."

That bill was added to other energy and jobs legislation that passed the House of Representatives this June.

There are some new communities in Colorado’s 3rd Congressional District this election. Boundaries were changed slightly after the 2010 Census, adding Leadville and a few towns along the I-70 corridor. The town of Trinidad and surrounding rural areas were taken out. Analysts say those changes could mean Democrats may have a slight advantage. Republican Scott Tipton and Democrat Sal Pace seemed to be focused only on each other during Saturday’s debate—but there’s actually four people on the ballot this November. That could make an already tight race much more complicated.

The next debate is scheduled for October 10th, in Pueblo.