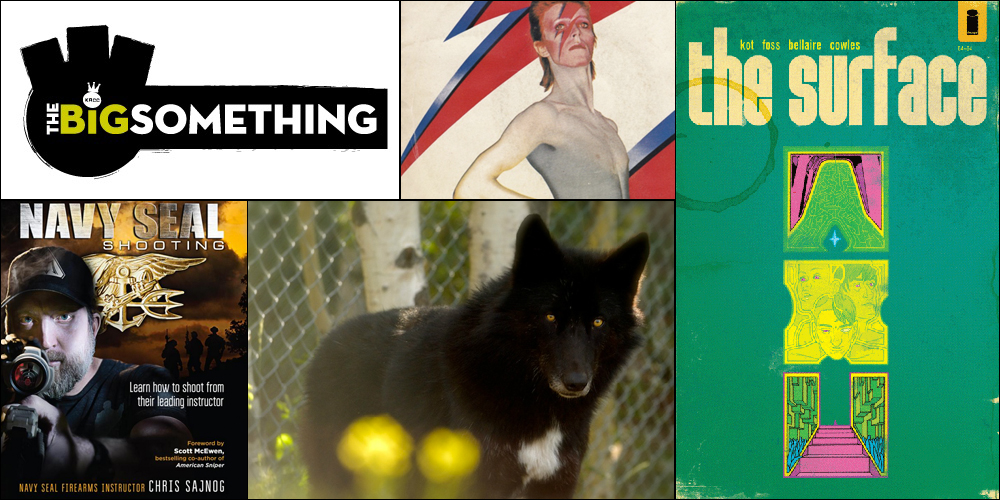 On this episode of The Big Something: local comic book artist Langdon Foss discusses his recent 4-short comic The Surface; retired Navy seal and author of the book Navy Seal Shooting, Chris Sajnog, discusses his thoughts on what it means to be a responsible gun owner; Big Something intern Charlie Neaves tells the story of Mission Wolf, an off-the-grid wolf sanctuary in the mountains west of Pueblo; and Jake Brownell sits down with KRCC Music Director Vicky Gregor to look back at the life and work of the late David Bowie. All that today on The Big Something.

Artist Langdon Foss arrived late to the comic books game. An illustrator by trade, Foss decided to try his hand at comics in his 30s after seeing the possibilities of Japanese and indie comics in the early 2000s. Since then, he’s illustrated for Marvel, DC and Image Comics—the publisher of the now-famous Walking Dead comics. Foss, a resident of Colorado Springs, stopped by the KRCC studios to talk with Noel Black about his recent 4-issue comic book series The Surface, written by Ales Kot, which was released by Image Comics last year. You can check out Foss's comic The Surface HERE.

Chris Sajnog (pronounced SIGH-NOG) literally wrote the book on weapons training for the secretive, elite military combat team, the Navy SEALs. Since retiring from the SEALs in 2009, Sajnog has adapted his training program for civilians, and just released the book Navy Seal Shooting. Noel Black spoke to Sajnog in December shortly after the shootings in Colorado Springs and in San Bernardino. This interview an outtake from the most recent episode of Wish We Were Here on Dragonman. Noel Black spoke with Sajnog via phone at his home in California.

The relationship between wolves and humans has long been a complicated one, especially here in the West. Questions of whether and how wolves should be protected have been hotly debated. And they continue to stir strong emotions on both sides of the issue. For decades, the staff and volunteers at Mission Wolf, a wolf sanctuary in the mountains near Westcliffe, Colorado, have been working to change people’s perceptions of wolves and protect those that can’t survive in the wild. Big Something intern Charlie Neaves recently visited Mission Wolf, and reported this story.

In our final segment, we turn to the Stars, or specifically the Starman, David Bowie. On January 8th, his 69th birthday, Bowie released his 25th studio album, Blackstar, to wide acclaim. Critics heralded the album as a resurrection, a return to form, possibly even the beginning of a brilliant new chapter in the long and winding career of a rock icon. Two days later, much to the shock and surprise of many in the music world, David Bowie passed away. It was the end of a long and largely private battle with cancer. In the wake of his death, we invited KRCC’s Music Director Vicky Gregor into the studio to discuss Bowie’s life and legacy, and to take a look back at the music he left behind.  Bowie passed away on January 10th.

This will be the final installment of The Big Something Radio Programme. We--Jake Brownell and Noel Black, the producers of this show--will be shifting our focus to our monthly radio show and podcast Wish We Were Here, which you can find on iTunes, Soundcloud or Stitcher. We'll also bring you more stories and interviews on weekdays during Morning Edition and All Things Considered. Soon, we will also be debuting a new show during KRCC Presents featuring Music Director Vicky Gregor and Program Director Jeff Bieri and focusing on all the great music and performances that happen here on KRCC.

Thanks to everyone who tuned in to The Big Something Radio Programme over the last year!