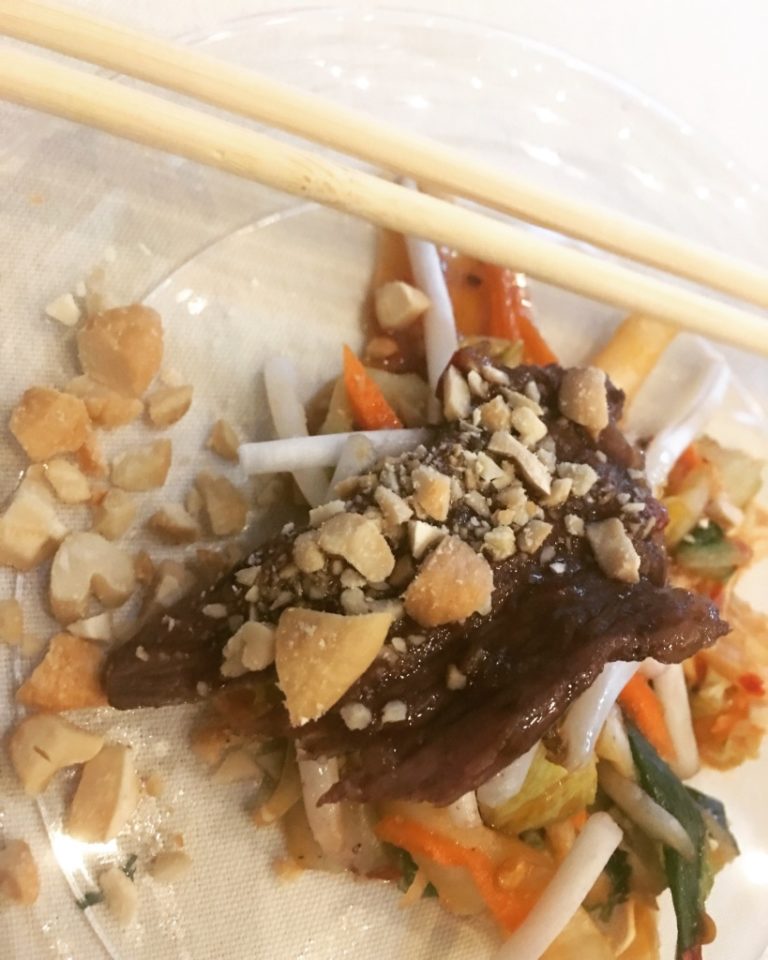 Culinary Passport, the annual fundraiser for the Pikes Peak Chapter of the American Culinary Federation, was held on Saturday, April 29, at St. Paul’s Catholic Church. The sold-out event had a bustling crowd and gave local chefs a chance to share some of their talents with an international approach. Each guest received a token upon entering to vote for their favorite dish of the night.

Matt Richardson, Executive chef at Cheyenne Mountain Country Club, and Vice President of the chapter, was the victor courtesy of his Indian cuisine. Tender tandoori lamb chops with yogurt sauce and chicken tikka masala atop fluffy naan bread was a win for the home team.

“I just thought it was a great group of food-forward industry people and those that enjoy the restaurant scene,” says Richardson. “And it’s always nice to have a lot of love at your station. There was good energy, chefs were making friends, and different food purveyors showed up to check it out.”

We are big fans of the cucumber gazpacho and lamb meatballs with romesco, Manchego, and Spanish olive oil from Chef Mark LeFebvre at Cerberus. “The gazpacho was light and refreshing,” says Richardson.

“My friend Stephen Fabian at Hotel Elegante, I really liked his Asian dish,” says Richardson. “Supansa’s rice cake was authentic, she told me it was her grandmother’s recipe.”

Over a dozen countries were represented with a library of wines to match. Bristol Brewing Co. and a multitude of beverage distributors were there to offer generous pours.

“To have the wine and beer there is great,” says Richardson. “The chefs had a good time and we already have a lot of people on board for next year.”

A portion of the profits from Culinary Passport go towards a select non-profit organization. This years recipient is Seeds Community Cafe. Seeds offers locally-sourced, organic food to customers on a sliding scale. Their programs give job opportunities to low-income individuals in an attempt to begin a new career in the restaurant and hospitality field.

Founder and chef at Seeds Cafe, Lyn Harwell, recently suffered a severe medical emergency from which he is successfully recovering. The atmosphere at the event reflects the support that the ACF and Colorado Springs culinary community has for its peers.

“We were at capacity and it was a good thing for chef Lyn,” says Nathan Dirnberger, President of the Pikes Peak chapter of the ACF. “We all came out to support our chapter and Seeds as well. This will keep his spirits up and I feel really proud. Anytime you have a group of people that come together for something bigger than themselves is a powerful thing.”

Culinary Passport showcases the high energy and excitement that circulates around events that promote friendly competition amongst local chefs. The ability to contribute to Seeds and to establish advocacy for its endeavors was a special cornerstone of the evening.

“I was blown away and it was a fun night,” says Dirnberger. “Everything was awesome. I don’t think there was single thing that they didn’t put their heart into. I’m pretty humbled that I’ve had the pleasure to be the president for the last year and a half.”