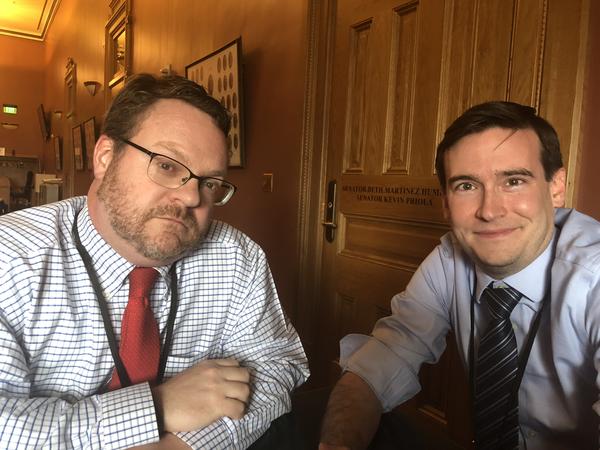 Colorado lawmakers wrapped up their annual legislative session this week. Even though the session was often overshadowed by sexual harassment allegations and the expulsion of former Rep. Steve Lebsock, lawmakers and the governor said it was one of the most successful sessions in history

Bente Birkeland sat down with statehouse reporters Brian Eason with the Associated Press and Ed Sealover with the Denver Business Journal to go over the session's highs and lows.

On a last minute deal on public pensions (PERA)

Brian Eason: The cost of waiting is really expensive - that's why we're where we are today. In 2010 they passed this massive reform bill, but the higher contributions were phased in over so long they've just now kicked in. Well, now we're $32 billion in the hole.

On a bipartisan proposal on transportation funding

Ed Sealover: There will be $645 million in one-time money over the next two years going to roads and transit that hadn't gone there before. There will be $50 million a year over the next 20 years going toward transportation. And there will also be a bonding initiative on the 2019 ballot that will ask voters to approve $2.3 billion in bonds to go to major transportation projects - think I-25 north of Denver, think I-70 through the mountains - unless there is a major transportation initiative passed by one of two outside groups on the 2018 ballot.

On big accomplishments in a historic session and election year

Eason: There was a lot of partisan stuff that died on both sides. You saw Democrats pushing for more social problems. You saw Republicans pushing to cut taxes and cut regulations. But at the end of the day, I think there was so much new revenue this year and there was so much pressure to get something done on the big issues - transportation, the pension, education - that there still was that room for legislators to get something done even in that partisan environment.