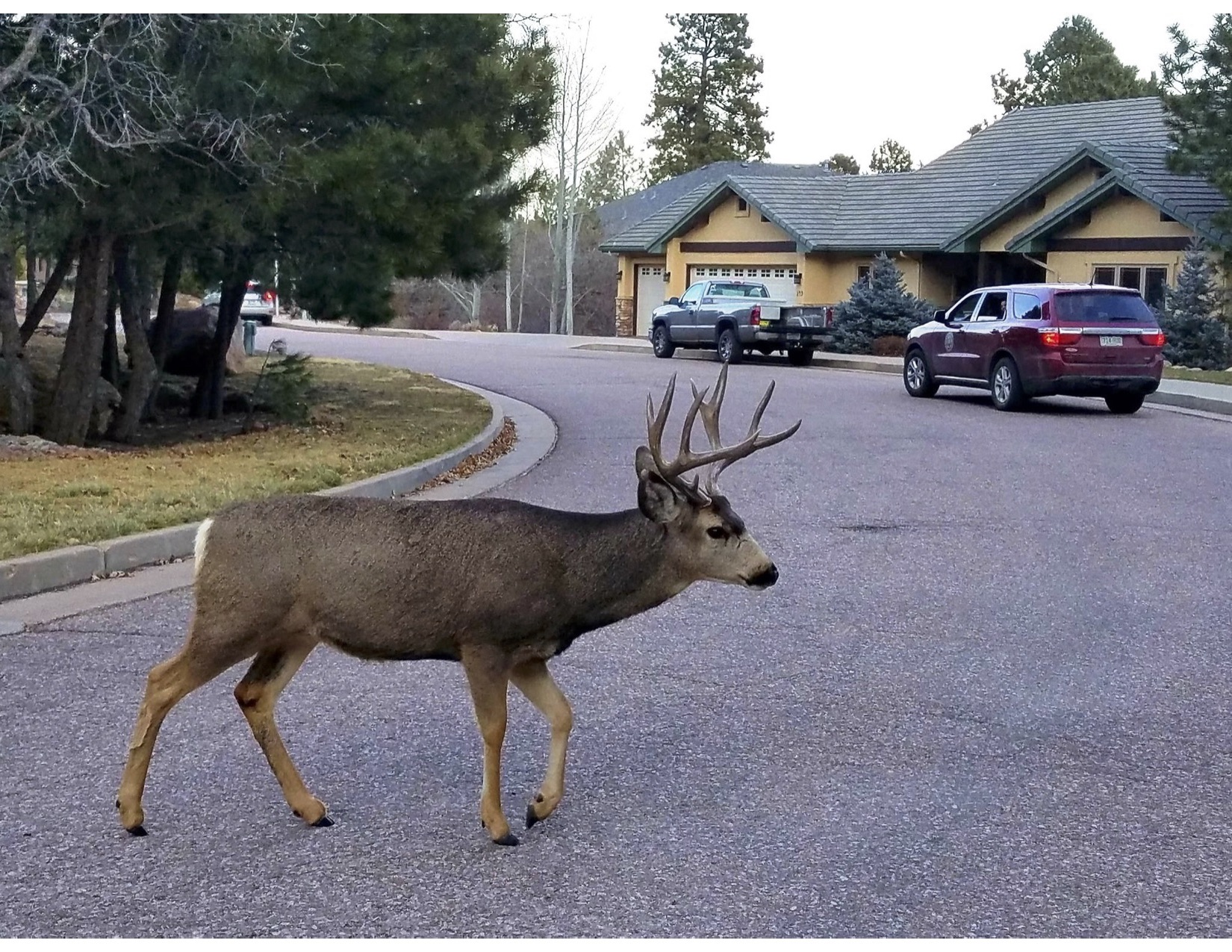 Colorado Parks and Wildlife A deer crosses a neighborhood street 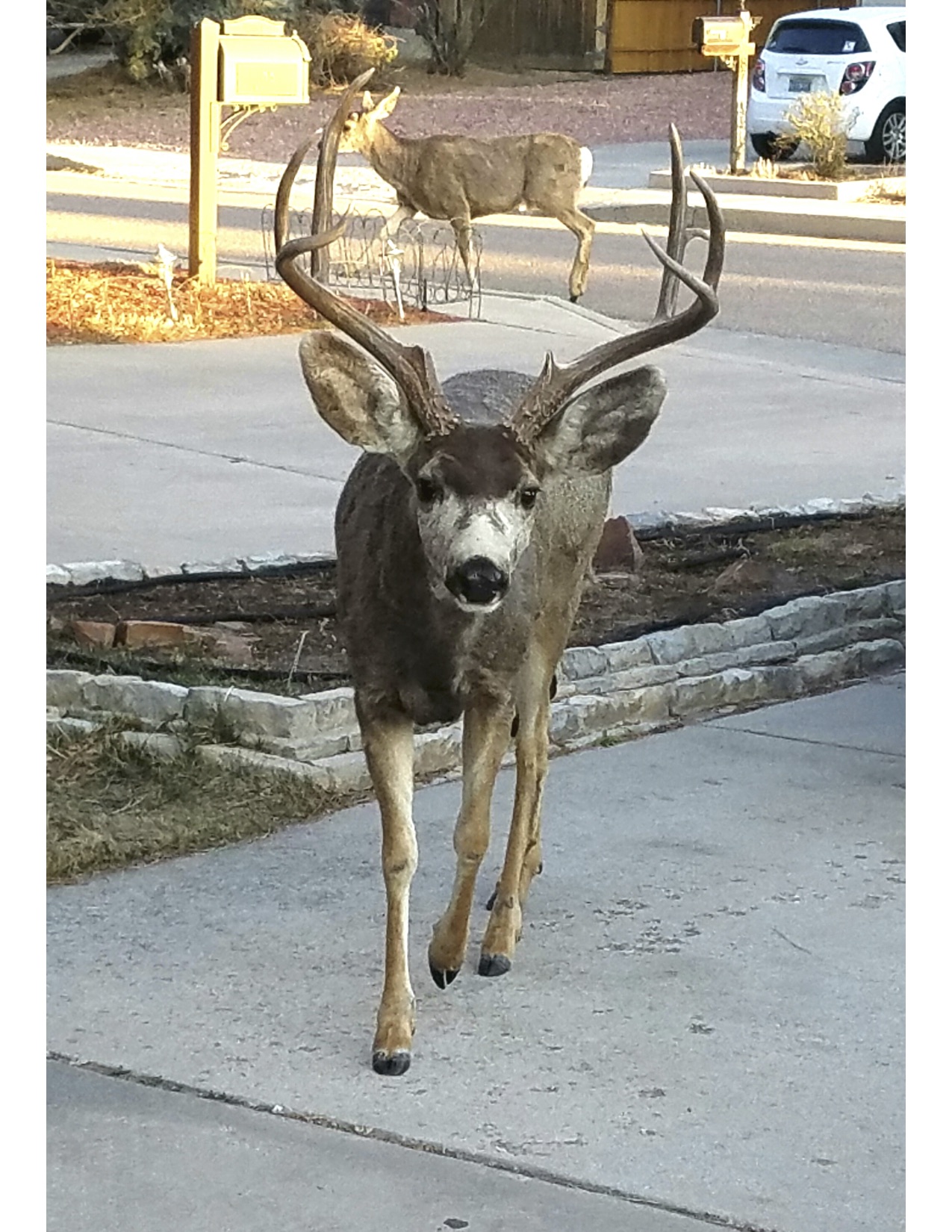 Colorado Parks and Wildlife Deer in a residential neighborhood.

The city of Colorado Springs is trying to figure out how to manage the large number of deer living within city limits. Frank McGee is the area wildlife manager for Colorado Parks and Wildlife. He is also a member of the city’s Urban Deer Task Force. He says several ideas are on the table, although, residents are divided about one proven method of reducing the population -- culling.

Highlights from the interview

On the current situation for the deer in Colorado Springs:

Part of the issue is when you have really high densities of deer, diseases spread much more rapidly in those animals. So, things like chronic wasting disease, epizootic hemorrhagic disease, we even have had plague in our deer here in town. When the animals have more nose to nose contact, those diseases spread more rapidly and effect more animals.

I think the other part of it is, people don't want the deer to die. Well, the deer are dying. But right now, they're dying on the side of road after getting hit by a car. And so, the question is, is that honestly more humane than having somebody hunt those animals or trap and euthanize them or cull or whatever else you pick.

On what prompted the city to gather ideas on managing the deer:

City staff, city council and my agency have received a number of calls and complaints and concerns from citizens living in town. I would say most of those complaints fall under two different categories—either property damage or human health and safety. Property damage can look like landscaping, gardens, plants, things like that. [In regards to] human health and safety, the biggest concern that we hear about is vehicles and vehicle collisions.

The city has recently started kind of keeping track of these sorts of things with respect to animals that they're picking up off of city streets. The city’s street department is picking up roughly one deer every day here in town. A deer a day is still probably a very conservative number as far as how many are actually being struck in town.

On the concern residents have expressed about the possibility of an urban deer hunt:

Most of the concerns that you hear about or that are expressed with respect to hunting in town [are] that they feel that it's not going to be safe, or they feel that it's not going to be humane. I think both of those things are just a misunderstanding about what the issue really is. I think there's been, honestly, some fear mongering going on [suggesting] that we're going to have people wandering the city streets shooting deer in your front yard, or in your backyard. That's never been contemplated.

There are a lot of communities, particularly in the eastern United States, that have regulated urban hunts and have had no issues with respect to safety.

On the success of managing deer populations through hunting at the Air Force Academy:

On the importance of not feeding wildlife:

Having people not feed wildlife is going to be an important aspect of addressing these concerns, irrespective of anything that is or isn't done. We have a problem with folks in town feeding deer illegally. It is illegal to feed deer in Colorado. I think a lot of people feed deer, that do feed deer are doing it because they feel like that's the best thing for those animals and that those animals need their help and things like that. But it's really not true. And in fact, it can have the opposite effect.

The city of Colorado Springs is currently looking into creating a plan to help manage the deer population. In the meantime, officials are working on a wildlife feeding ordinance to address the illegal feeding of wildlife within the city.

This interview was edited for time and clarity purposes.