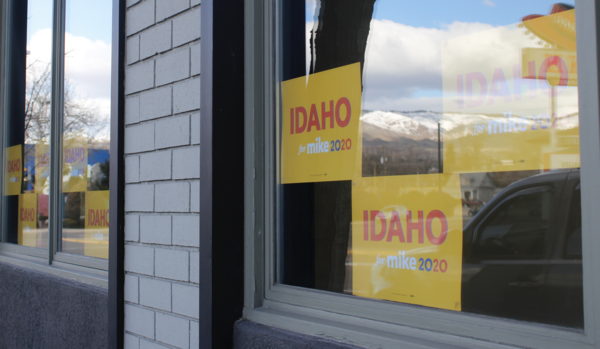 It’s no secret that Michael Bloomberg is spending a lot on his Democratic presidential campaign, from Super Bowl ads to social media influencers. But he’s also spending a lot of that money to hire staff in the Mountain West.

One place that money is going is Idaho.

The Boise office is hard to miss if you’re driving by. There are signs coating the windows saying “I Like Mike” and “Idaho for Mike 2020”.

Inside the office, you’re welcomed by more signs and a seemingly true-to-size cardboard cutout of Bloomberg himself. A handful of people and one dog are situated at folding tables in a large open central area.

Erin Hudson is the spokesperson for Bloomberg’s campaign in Idaho. She wouldn’t say how many people Bloomberg has hired here, but she did say there will be offices in Boise, Pocatello and Coeur d'Alene.

“So we'll have hubs in those sections of the state, and then we have teams all over the state,” she said.

Bloomberg is the first Democratic presidential candidate to open offices here so far this election season. He’s also the first to hire staff in rural, red Wyoming. And he’s got more people and offices in Utah than anyone else. Some of those jobs pay $6,000 a month, plus benefits.

Hudson said Bloomberg’s big coffers give him an edge.

At last count, she said Bloomberg had offices in 43 states.

And Hudson said some of those campaign workers are contracted through the November elections, even if Bloomberg doesn’t win.

“We all have the same goal,” she said. “Remove Donald Trump from the White House.”

If Bloomberg loses the nomination, she said these offices will work with whomever wins.

“So whoever that nominee is, they're coming into this well-built structure and team that's ready to help them out and get to that end goal,” she said.

Boise State University political scientist Jaclyn Kettler said that might be harder than it sounds.

“If that organization continues to be operated by him and not connected to the Democratic Party, there can be coordination issues, there can be mixed messaging,” she said.

That said, Kettler suspects Bloomberg and his campaign may be promoting this idea of “sharing the wealth” for a good reason: image.

So she said this could be his response: He’s helping the Democratic Party overall, even if he doesn’t get the nomination.

She said buying up staff before other candidates turn their attention to the Mountain West is also strategic.

“It is a pretty interesting tactic to try to monopolize a lot of the experienced campaign staff in a region,” she said.

That said, Hilliary Clinton had more offices and staffers in much of the West than other 2016 candidates, and still lost to Bernie Sanders in states like Utah and Idaho.

“Just because you spend the most does not mean you're going to win,” she said. “It can even be a sign that you're not going to be successful that you're having to spend so much in order to collect those votes.”

Sanders still has volunteer networks built up from years ago, which helped him win the region. Other campaigns have been working hard to build them, too. Ben Halle is a spokesperson with Pete Buttigieg’s campaign.

“In order to scale up in a real way, you really need to have a grassroots volunteer network that is on the ground in all those states that’s from those communities that’s organizing those communities,” he said.

It’s worth noting here that many of those communities’ makeup is shifting — something  Bloomberg’s campaign may have recognized.

William Frey is a demographer at the Brookings Institution, and he found that when you compare the 2016 presidential election to the 2018 midterm election, either the Republican advantage shrunk or the Democratic advantage grew in all seven Mountain West States.

Frey said that while Bloomberg does need all the states he can get during the primary season, he could also be laying groundwork for future Democrats. The 2020 Census won’t shift representation before the election, but may shift things afterwards.

“It is a region on the go, and it is a region that’s growing,” he said. “So I can understand why politicians want to be part of that change.”

Regardless, Bloomberg is digging deep into his campaign’s pockets to reach Mountain West voters before they pick their ideal Democratic candidate in the coming weeks.