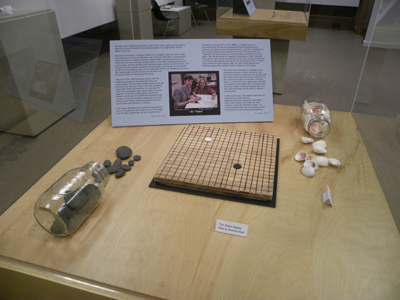 The World War II Amache Japanese Internment Camp in southeastern Colorado is the subject of an exhibit at The University of Colorado at Colorado Springs opening today. As KRCC’s Eliza Densmore reports, the exhibit presents a dark piece of Colorado history.

The exhibit pairs archaeological remains with oral history from those associated with the internment camp. Artifacts include marbles, hair barrettes, and Japanese sake bottles. DU Associate Professor of Anthropology Bonnie Clark helped create the exhibit. Clark says the goal is to create a dialogue and encourage people to visit the site in southern Colorado.

"This larger story that we don’t often talk about when in the US we got things wrong. And particularly I think our history, rightly so, of World War II, is often about victory and about going in and really stopping oppressive regimes abroad but there’s also some things that happened at home that were sort of counter to that."

At capacity, the camp housed over 7,500 people during the war. Two-thirds of them were American citizens. The exhibit’s a collaboration among faculties at UCCS and DU and was created by DU students.

The exhibit will take place at the Heller Center for the Arts and Humanities at UCCS October 15th-November 5th.