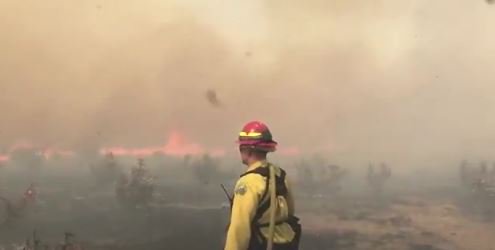 The El Paso County Sheriff's Office is reporting that the #117Fire has been completely contained.

We are thrilled to report the #117Fire is 100% contained and all evacuations have been lifted. pic.twitter.com/gU0bf9YZP4

The fire is now estimated at 25% containment, with total acreage holding around 41,000. El Paso County Sheriff Bill Elder says the number of destroyed homes has climbed to 23, seven of which were vacant. That means 16 displaced families.

Evacuations are still in place, although Elder calls it a "soft evacuation," because, as he says, "so many people have moved back in."

"Again, I really caution the public," he added, "if you're back in this area, there are still active fires that are still running in the packed grass. We need to be very very vigilant that these houses can start up."

The American Red Cross says four people stayed at the shelter overnight, and they may reassess the need for it to remain open.

Sheriff Bill Elder estimates the #117Fire at 5-10% containment, and says crews are still working to control the fire before winds are expected to pick up Wednesday afternoon. He reports that two additional homes were burned this morning, bringing the total number to 12. He describes the situation as still "highly volatile."

A state type-2 team has taken over command of the fire, freeing up state and federal resources and reducing the overall financial burden of the fight for local agencies.

Agencies from across the region are continuing to battle a blaze in southern El Paso County that has claimed roughly 41,000 acres of grassland and burned 10 homes since it began Tuesday afternoon. El Paso County Sheriff Bill Elder says the fire is currently in a "manageable stage," but that crews are working to control the blaze before 40 mph winds are expected to pick up Wednesday afternoon.

Mandatory evacuations remain in place Wednesday as hundreds of firefighters work the fire, with air support from Fort Carson and additional air assets set to arrive from nearby states later in the day. Sheriff Elder says the State of Colorado will take over command of the #117Fire, together with a smaller fire burning several miles to the east, at noon Wednesday.

"Right now, it doesn't appear during the flyover that there's a huge amount of risk, we've just got to stop it before the winds pick up, that's our biggest concern at this point," says Elder.

No estimate of containment has yet been given.

Perimeter map for #117Fire. The fire is still very active in the northeast and southeast. pic.twitter.com/AlwrvJVA5D

Overnight, crews contended with 50 foot flames traveling at speeds of 30 mph. Two first responders were treated for smoke inhalation at a local hospital, and a fire engine was damaged and a patrol car burned completely in the blaze.

The cause of the fire hasn't been determined yet, but given its proximity to Interstate 25, Sheriff Elder speculates that it was ignited by a cigarette or sparks from chains dragging against the roadway. These are just a few of many potential ignition sources that officials say residents should be especially mindful of as we enter an unusually dry fire season.

The El Paso County Sheriff's Office is encouraging everyone in the region to visit their website about how to prepare and plan for emergency evacuation situations.

The county is also maintaining a hotline for residents with questions about the fire, which can be reached at 719-575-8888.

Confirmed acreage of the burned area is 40,892. The number comes after original estimates Wednesday put the fire at 60,000 acres, which was then updated to 30,443.

More than 200 firefighters, 40-50 law enforcement officers, and myriad support personnel are working to beat back a fast-moving grassfire, dubbed #117Fire, that sparked Tuesday afternoon near I-25 mile marker 117, south of Fountain. In a briefing Tuesday night, El Paso County Sheriff Bill Elder said crews are still in search and rescue mode, and that they're "not gaining any ground on containment in any way."

"It's going to be a long night for the firefighters that are on the line, but we think we've got enough resources to at least engage," he added.

Mandatory evacuations remain in effect for parts of southeastern El Paso County, visible in the map below.

#117Fire update 8:51p - Evacuations will stay in place throughout the night. Evac information will be updated Wednesday morning as it becomes available from the @EPCSheriff #wildfires pic.twitter.com/S4J09fvYbX

An evacuation shelter is open at the Fountain Valley Baptist Church, 500 Alabama Ave., in Fountain. Small animals can be taken to the Humane Society of the Pikes Peak Region in Colorado Springs; the Norris-Penrose Event Center is open for large animals.

A previously issued pre-evacuation notice for the Pueblo Chemical Agent Destruction Pilot Plant has been lifted, and the plant is continuing normal operations.

Sheriff Elder says the fire has so far claimed at least 10 structures and led to some animal injuries and "a few minor human injuries."

60 mph wind gusts have meant that crews haven't been able to survey the fire using aircraft, and Elder says they likely won't be able to asses the full extent of the damage until tomorrow. For now, he says they are focused on "chasing the head" of the fire and getting people out of its way.

The county has been receiving assistance from a variety of agencies, including Fort Carson, which agreed to suspend training exercises Wednesday to provide resources to help fight the fire. Elder says air resources and water drops will be available starting early Wednesday morning.

The county says that a disaster declaration has been signed and that negotiations are underway with the State of Colorado to take over command of the fire.

A red flag warning remains in effect across much of southern Colorado until 10 p.m., and El Paso County is under stage II fire restrictions.

The Stage II Fire Restrictions shall go into effect immediately and the following are prohibited:

1. All open fire and open burning are prohibited

2. The sale or use of fireworks.

3. Outdoor smoking except within an enclosed vehicle or building pic.twitter.com/N5laQwcwdf