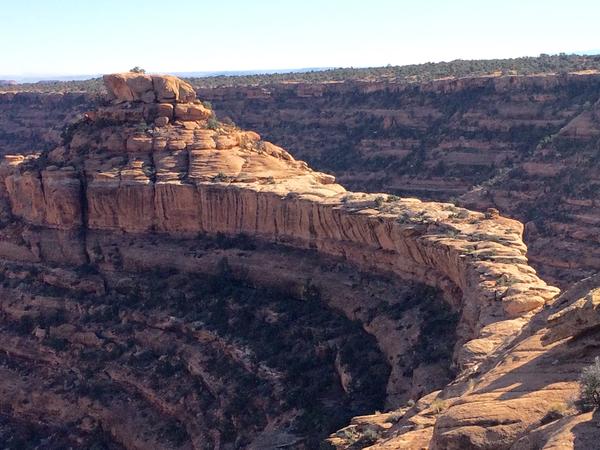 The Bureau of Land Management has issued draft proposals outlining the uses the federal government wants to allow in the Grand Staircase-Escalante and Bears Ears national monuments in southern Utah.

The BLM said the agency's preferred plan among four options for the Grand Staircase-Escalante National Monument would be the "least restrictive to energy and mining development." That could potentially open up hundreds of thousands of previously untouched acres to extractive industries.

Several lawsuits are still pending against President Trump over his decision last December to downsize the two monuments. Tribal and conservation groups are opposed to the changes, which divided Grand Staircase into three smaller units and Bears Ears into two.

"It really is a big change in direction in how that land was administered for the last 21 years, since President Clinton designated [Grand Staircase]," said Brian Maffly, public lands reporter for the Salt Lake Tribune.

Maffly pored over the land management plans that were posted on Wednesday. He spoke with KUER about what the BLM is proposing and what that could mean for the region.

This interview has been edited for length and clarity.

R: In your article, you mentioned there are four categories that the BLM had to choose from in terms of how much protection to apply to these places and they chose the least restrictive. Can you explain what those four categories were and what the thinking was behind picking that one?

M: The BLM wanted to have a range of alternatives for these management plans. So at the one end was the kind of 'don't do anything, leave the management structures as they are now.' And that's always an alternative when they do environmental impact statements. Then the next three are varying levels of protection and restriction on land uses. So the preferred alternatives in both cases — both monuments — are the ones that allowed the most 'multiple use' and the least restrictions on development.

So, for example, the Grand Staircase plan, which is actually four separate plans, the preferred alternative is leaving open 700,000 acres for mineral development taken out the monument. There's a lot of great coal there ... oil and gas ... tar sands are in there. And that draft allows the most amount of land to be available. So that's a sign among the critics that this was drafted to benefit the energy industry.

R: That was my next question. What's been the feedback from environmental groups on this?

M: Super negative. And it's of two different kinds. Some of the groups are saying 'wow these draft plans really are a giveaway to the extractive industries.' Especially the Grand Staircase plan. And then, on the other hand, the Native American groups that support the Bears Ears monument and want to see it restored are objecting to even participating in this planning process. They say it's illegitimate.

R: Is it surprising how fast these have come out since the designations were reduced less than a year ago?

M: That's a big question. But what's next is a public comment period where the Interior Department will be reviewing what I believe will be thousands of comments coming in. And that runs through November 15. After that, I think we'll see the Interior Department make a very expedited decision on which draft or which alternative to adopt and then to start implementing it right away. And meanwhile, this whole thing is going to be playing out in the courts.