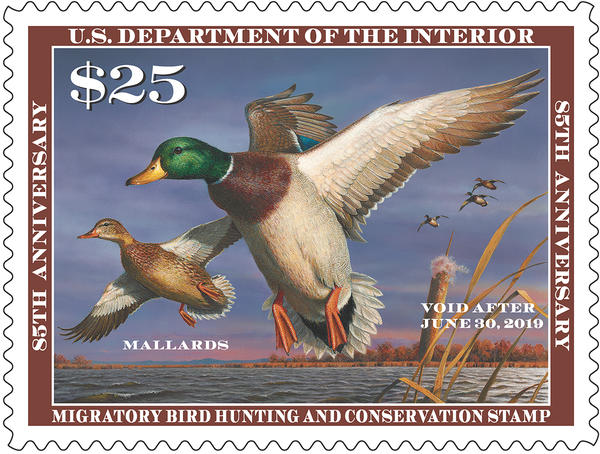 The Federal Duck Stamp Program is for the birds, at least when it comes to birdwatchers.

Required for all waterfowl hunters 16 and older, the stamp program helps pay for U.S. conservation efforts. But as Americans migrate away from hunting, sales for the annual $25 stamp have slumped.

Environmental and sportsmen's groups have pushed to fund conservation programs through legislation like the Land and Water Conservation Fund, which takes money from oil and gas leasing and pumps it into public lands. Funding for that program got winged after Congress let it expire in the fall and hasn’t been reauthorized.

That’s left organizations like the American Birding Association trying to get birdwatchers to buy the stamp.

“What we’ve been trying to do is try and educate the birding community, the nature community and non-consumptive users on the benefits of the duck stamp.” said Bill Stewart, owner and operator of the Delaware-based birdwatching group Red Knot Outfitters.

It may not be working out.

A recent study published in the journal Human Dimensions of Wildlife found that roughly a third of all serious bird watchers surveyed actually purchased the stamp. That percentage was even less among casual birders.

Stewart acknowledged it was an uphill battle, because, unlike hunters, birders don’t have to buy the stamp.

“So they think it’s something that goes along with a hunting license,” he said. “If they’re not a hunter, that they don’t need to get one.”