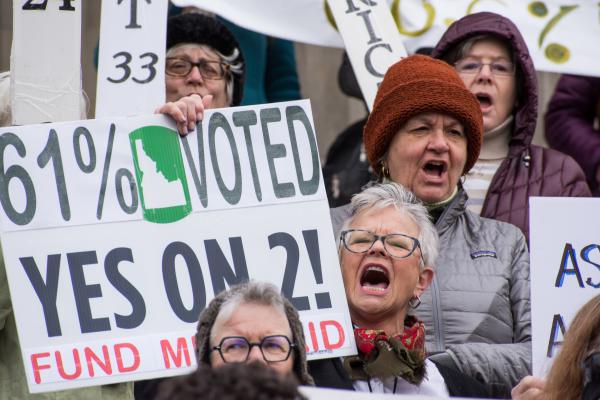 In the 2018 midterms voters in the deeply conservative states of Idaho and Utah went against their Republican controlled legislatures on healthcare. They both voted yes on initiatives to expand Medicaid under Obama’s Affordable Care Act.

But it didn’t end there. Republicans in both Capitols pushed back.

Utah’s governor has already signed a bill that significantly rolls back the voter approved expansion. There’s a push in Idaho to follow suit.

Utah voters approved its Medicaid expansion initiative by a slim majority of 53 percent.

That didn’t stop Utah’s legislature and its governor from signing a scaled-back version of the plan into law. Governor Gary Herbert (R) said their version could be a good fiscal model for other states.

“I think Utah is going to be on the cutting edge of this, coming up with a new, innovative way to expand Medicaid … and also helps the federal government balance their budget,” Herbert said

The expansion plan now reduces eligibility for Medicaid from about $17,000 to $12,000 for an individual, adds work requirements and caps Medicaid spending in the state overall. But Utah needs permission from the federal government to approve this customized plan and that could hold things up for a planned April 1 rollout.

Andrew Roberts was at the state Capitol after legislators voted. He was not impressed.

“They are banking on a hope and a prayer with these federal waivers,” Roberts said.

He’s with the group behind the Utah’s expansion initiative. He says the amendments are bad policy and they also go against the will of the voters.

“We voted for this on Nov. 6. We were very clear about what we wanted and, I think, whether you voted for Prop 3 or you voted against it, you ought to be concerned that the legislature isn’t listening to your voice.”

The revised Medicaid law passed with a referendum-proof majority, leaving few options for supporters of the original initiative.

In Idaho, supporters of the Medicaid expansion effort rallied recently at the Capitol in Boise to tell lawmakers to back off.

But that’s not stopping several Republicans here from trying to follow in Utah’s footsteps.

“We don’t always let the majority make all the decisions because our Constitution is to protect the rights of everybody, not just the majority,” says Rep. John Vander Woude (R-Nampa).

He says he’s fighting for the roughly 39 percent of Idahoans who didn’t vote for the Medicaid expansion.

“Nobody wants to be the person that actually, I think, that brings it forward and becomes the target. I don’t mind that. I’m more than happy to stand up and do what I think is right,” Vander Woude says.

He’s on the same page as Utah. He says Idaho can’t afford the full version and should go with a scaled-back model — like its southern neighbor’s plan.

But Sandi Stange says that not what Idahoans voted for. She lobbied for expansion.

But she says she wouldn’t put it past Idaho’s legislators to tweak the law the voters enacted. Idaho's actually done it before. Lawmakers repealed a term limits ballot initiative a couple decades ago. She didn't like it then and she doesn't like it now.

“It doesn’t bode well for them to go around the back alleys and find ways to undermine what the people who put them in office are asking them to do,” Stange said.

Voter initiatives have been around a century or so and are especially popular out west.

“Establishing the initiative process was a key tenet of the populist and progressive movements,” says Josh Altic, who oversees ballot initiatives nationwide for Ballotpedia.

He’s not surprised that state legislatures are beginning to prune, or in some cases, significantly gut, voter-approved laws.

For example, South Dakota lawmakers repealed a 2016 initiative that overhauled that state’s campaign finance system and in Utah, legislators didn’t just push back on Medicaid expansion after the 2018 midterms. They also scaled back a voter initiative on medical marijuana.

So, are voters pushing back themselves?

“It’s a pretty bold move, right?" says Altic. "You’d think there’d be some sort of political consequences to overturning something that was approved at the ballot and I think we’re still sort of waiting to see what that fallout could be and whether or not there is any."

The push and pull over what a representative democracy should look like isn’t going away. Altic expects friction between lawmakers and voters to keep building as initiatives over controversial issues are introduced.

This story was produced by the Mountain West News Bureau, a collaboration between Wyoming Public Media, Boise State Public Radio in Idaho,  KUER in Salt Lake City and KRCC and KUNC in Colorado.