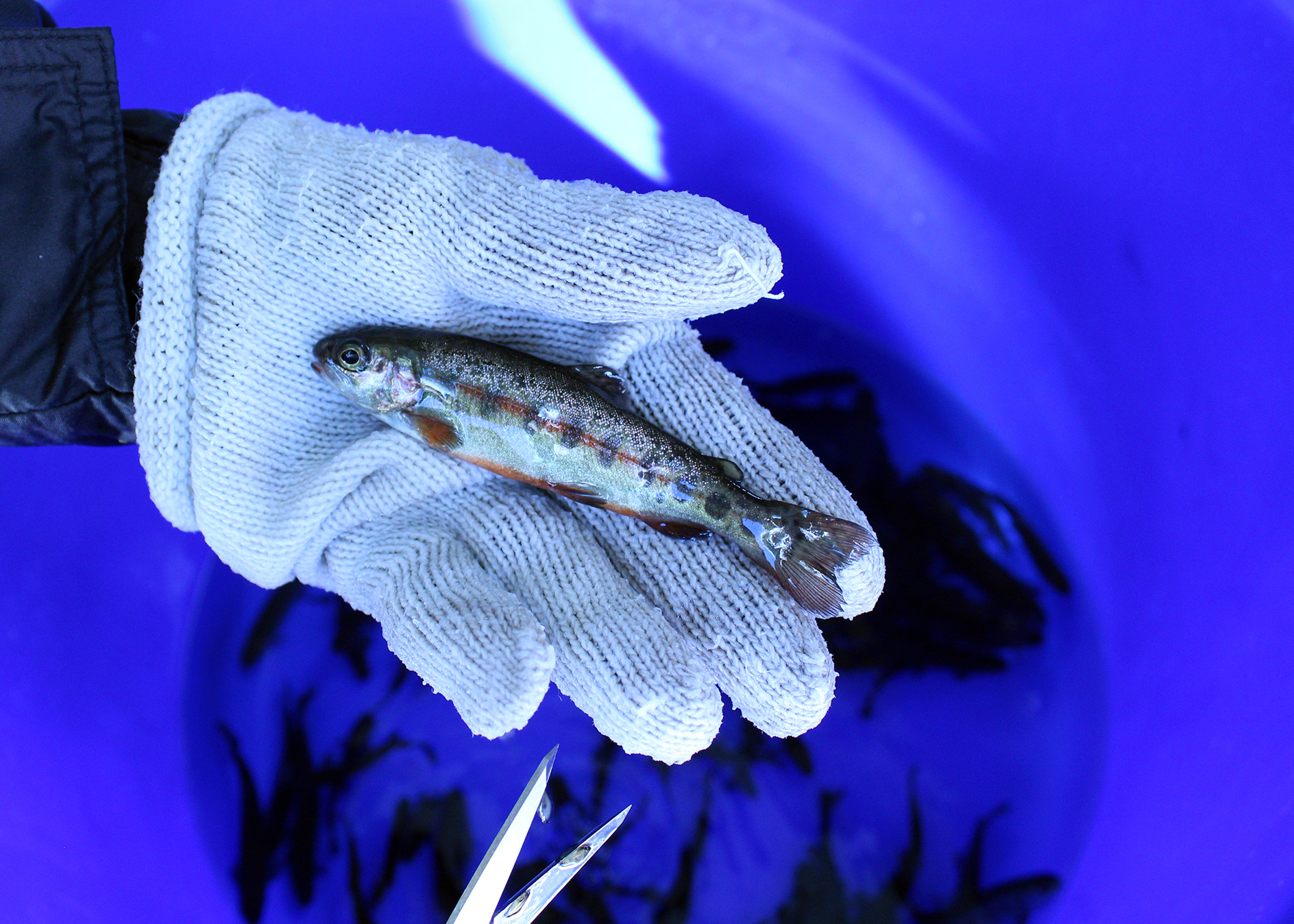 Abigail Beckman / 91.5 KRCC A volunteer holds rainbow trout in his hand, prior to clipping its adipose fin.

Abigail Beckman / 91.5 KRC 20,000 fingerling rainbow trout were spawned on the banks of the Gunnison River and relocated to a fish hatchery in Salida. 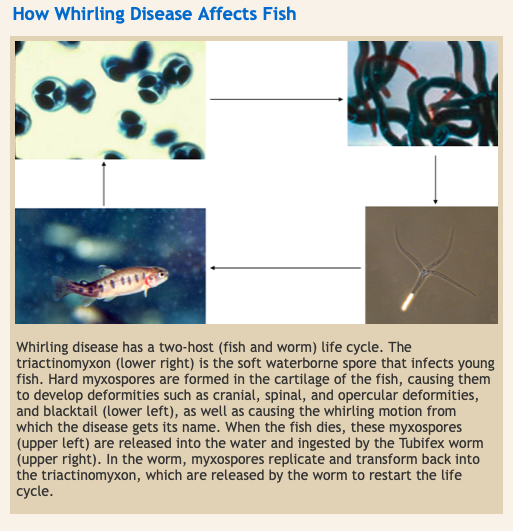 Starting in the late 80s, rainbow trout in Colorado began dying off because of a parasite that causes whirling disease. By 1997, wild rainbows in the state had all but vanished. The disease is caused by a water-borne parasite that infects young trout and some species of salmon, causing deformities of the skull and spinal column. The infected fish swim in circles, hence the name whirling disease. Ultimately, it leads to death.

But now, thanks to efforts from Colorado Parks and Wildlife (CPW), the fish--popular with anglers and conservationists alike--could be on the rebound.

At a small fish hatchery in Salida, a handful of people sit in folding chairs. They’re all volunteers from the local chapter of Trout Unlimited. Hunched over five-gallon buckets full of water and baby, or fingerling, trout, every so often they call out for “more fish.”

That’s the cue for CPW’s aquatic biologist Michael Atwood. He grips a long-handled net and dips it into one of two refrigerator-sized pools in a concrete runway, scooping up a few dozen juvenile trout.

“This group of fish is a pure strain of rainbow trout that came out of the Gunnison River. They’re special because they’ve shown some resistance to whirling disease,” he says. “Back in the 90s, [whirling disease] really made its way across the state and damaged a lot of our rainbow trout fisheries.”

He plops the mildly sedated fish into the buckets and volunteers get to work. With a small shear, they clip off what is called an adipose fin. Atwood grabs a three-inch trout from a bucket and points to the fish’s spine.

“The big fin on top is the dorsal fin, and then just behind it here, that little nub...that’s the adipose fin,” he says, gesturing to a fin closest to its tail.

Once the fin is removed, the fish are gently tossed into the next holding area so they’re separate from those yet to be clipped. Atwood says clipping the adipose fin is a marking tactic fish biologists all over the world have used for decades.

The fish in his hand is one of 20,000 rainbows from the Western Slope, spawned on the banks of the Gunnison River and brought to this hatchery in Salida. They’ll be held in this building until they’re released into the Arkansas River later this month.

“So then, when I’m in the field, I’ll be able to quickly look and see presence or absence of that fin and that will tell me where they came from,” he explains.

Officials with Colorado Parks and Wildlife say whirling disease was inadvertently introduced in the state at this very building in 1987. As a private hatchery at the time, infected rainbow trout were brought in, and the parasite made its way into the river and into the wild fish, dropping their numbers.

“In fact, it decimated a lot of them,” Atwood says.

Colorado Parks and Wildlife has been working to reintroduce rainbow trout back into the Arkansas River at cost of about 55 cents per fish. That comes after the close to $13.5 million the agency has spent sterilizing hatcheries found to contain whirling disease.

Today’s work relies heavily on volunteers. It’s 16 degrees outside, and not one degree warmer inside the hatchery. A thin sheet of ice covers the concrete floor and water drips from the ceiling. Yet, here they sit grabbing tiny, squirmy fish, clipping their fins, and doing that all over again thousands of times.

Local resident Beverly McBrien has helped out all three years of the program. “I have loved fishing my whole life,” she says. “I grew up fishing. This is a way I can give back. I’d love to see more people out here. There’s nothing like clipping fins in the middle of winter,” she laughs.

As to why these specific fish are resistant—no one knows for sure. Atwood says the trout were somewhat isolated because of a dam. They were exposed to the parasite, and some survived to reproduce and sustain the population.

“The goal is that these fish can go into the river, survive to adulthood and then reproduce on their own and sustain that year after year so we don’t have to continue stocking,” he says.

If that happens, the fish can spawn more resistant trout and the population can grow.

The first cycle of Gunnison River rainbows was introduced in the Arkansas in March 2017. Atwood says that group will soon be sexually mature.

“So hopefully, this October when we’re out checking in on the population, we’ll start to see some signs of young rainbow trout that have all of their fins so we know that they’re wild. That’s how we’re going to document whether or not these fish are reproducing,” he says.

So far, Atwood says the imported population has been surviving. He says he’s optimistic given that these fish are accustomed to a river environment like the one they’ll be introduced to in a few weeks.

Additionally, Atwood says Gunnison River rainbow trout stocked into the Arkansas last spring had grown impressively to about 8 inches on average by the fall. About half of the rainbows found during annual sampling in October 2018 were the resistant population.