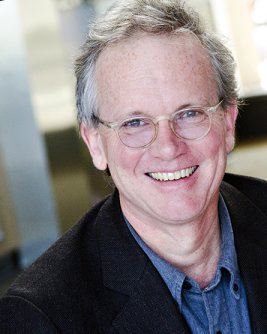 Professional background:
Mark joined Colorado Public Radio in 2013 after serving a brief stint as news director at Arizona Public Radio, Flagstaff. Prior to that, Mark spent 11 years as the news director for New Hampshire Public Radio where he oversaw a team of reporters who won numerous state, regional, and national awards for reporting and storytelling. In this position, Mark also developed a system of freelance reporters who filed stories from across the state.
Before moving to New Hampshire, Mark spent 12 years at Pacifica Network News in Washington, D.C. as a reporter, editor, and lastly as bureau chief. He also worked in production on NPR’s “Weekend All Things Considered.”
Before his career in radio, Mark held a variety of different jobs that included driving a taxi, working in a bookstore and renovating old homes. His proudest achievement is raising his three children—Frances, Samuel and Jack—with his wife Kelly.

Q & AWhy did you become a journalist?
On one level, like most journalists, I’m inherently nosey. I want to be the guy who knows what’s going on, and I want to tell you about it. On a loftier level, I believe journalists can help inform the public, enabling citizens to make educated decisions about the issues they face each day. In that way, being a journalist is my way of trying to make the world a better place.
How did you get into radio?
I fell into it. After college and living abroad for more than a year, I came back to Baltimore and wanted to get involved with something creative and informative. I joined a radio production group working out of the local public radio station. We produced a weekly, half-hour public affairs program for no pay. We earned money to support the operation by syndicating our shows, mostly to community and college stations across the country. It was during that time that I caught not only the journalism bug, but also the public radio bug. I still haven’t been able to shake it.
How did you end up at CPR?
The public radio world is small. I heard about a job opening for a senior editor and knew that former colleagues had taken positions at CPR and liked it. I applied and was offered the job, so I jumped at it. Because Denver seemed like a great place to live, and I would still get to look at snow-capped mountains I’d become used to in New Hampshire and northern Arizona, it felt like the perfect place to relocate to.